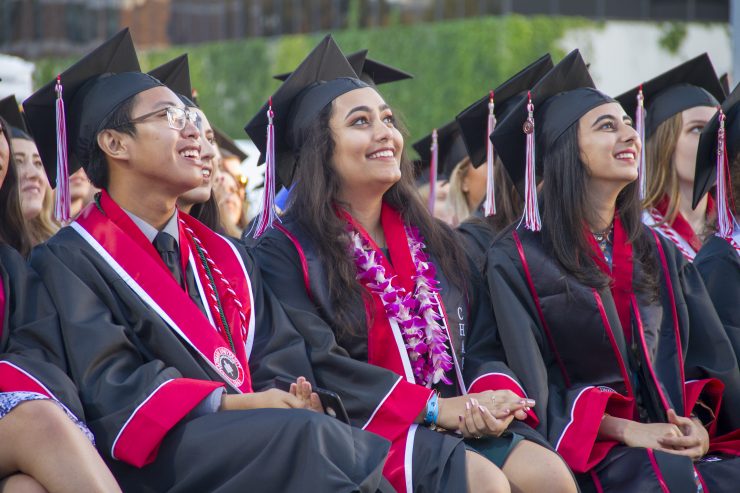 Chapman alumni Matt and Ross Duffer ’07, the makers of the Emmy Award-winning Netflix show “Stranger Things,” returned to campus as honored guests to deliver a characteristically humorous and heartfelt closing convocation speech: “When President Struppa asked us to give a speech at the closing convocation, our first reaction was… what the heck is a closing convocation?”

They offered students an often humbling narrative of their journey, citing moments of existential panic about their careers, but also assuring the new class that it’s okay to take a little time to realize your career goals.

Check out notable Chapman commencement speakers from the past 50 years.

After The Duffers Brothers ended their speech with roaring laughter from the crowd, Jerry Price, Dean of Students, and President Daniele C. Struppa welcomed the undergraduate and graduate students to rise, turn their tassels and become newly minted alumni and forever Chapman Family members.

This year’s Cheverton Award winner Vidal Arroyo ’19 is also Chapman’s first Rhodes Scholar — one of the most prestigious academic scholarships in the world.

Arroyo, a first-generation college attendee and biochemistry and molecular biology major, gave a heartfelt address the class of 2019 on the topics of light, love, tolerance and upholding the truth.

Referencing George Orwell’s statement, “In times of universal deceit, telling the truth is a revolutionary act,” Arroyo warned against philosophies that threaten tolerance and truth.

Ret. Colonel John D. Grabenstein, R.Ph., Ph.D. – Nominated by School of Pharmacy, Honorary Doctor of Science
Awarded for distinguished service, career and contributions to Armed Forces preparedness and the pharmacy profession. Grabenstein has worked in vaccination medicine, first heading up the post 9/11 administration of the anthrax vaccine to military personnel and staff pre-deployment and successfully working to expand the role of neighborhood pharmacists in providing vaccines. His work is a part of the reason why you can get your shots at most all corner-store pharmacies.

Maria Minon, M.D. – Nominated by Crean College of Health and Behavioral Sciences,  Honorary Doctor of Humane Letters
Awarded for contributions and impact on the welfare a of children and their families in Orange County as the Chief Medical Officer and Vice President of Medical Affairs at CHOC Children’s Children’s Hospital Orange County. Under her guidance, CHOC Children’s has successfully launched a comprehensive pediatric inpatient mental health facility and an autism center. Now, CHOC is a leader in providing care during critical mental health moments for its young patients.

Parker S. Kennedy – Nominated by Fowler School of Law Honorary Doctor of the University
A leader in business, Kennedy has been named as one of Forbes Magazines top business executives. He is a passionate Chair of the Board of Advisors for the Fowler School of Law, a Trustee of the University, and Chairman of the Student Life Committee. Dedicated and involved in every area of university life, he is a continuing voice providing essential guidance for our development, planning and community outreach.

Robert Day – Nominated by the Office of the President, Honorary Doctor of the University
As the Chairman and President of the W.M. Keck Foundation, Day’s leadership is one of commitment to innovation, research, and a dedication to empowering discovery. Keck funds some of the most innovative and highly selective projects of the last 60 years in science, medicine and education at all levels.

It’s been a tremendous academic year filled with new benchmarks of success for Chapman University.

Phi Beta Kappa, established in 1776, is our nation’s oldest and most prestigious honor society. A mere 10 percent of U.S. colleges and universities have Phi Beta Kappa chapters, making the addition of Chapman a significant achievement for our 158-year old university.

Also this academic year, Chapman was elevated to R2 status in the update of the Carnegie Classification of Institutions of Higher Education. The R2 designation is a significant progressive step that propels the university forward as a nationally and internationally recognized institution. This higher ranking is an indication of the university’s growth in research, doctoral and professional practice degree programs.

The entire Chapman community deserves recognition for a banner year, but on this night, the graduates were the stars. 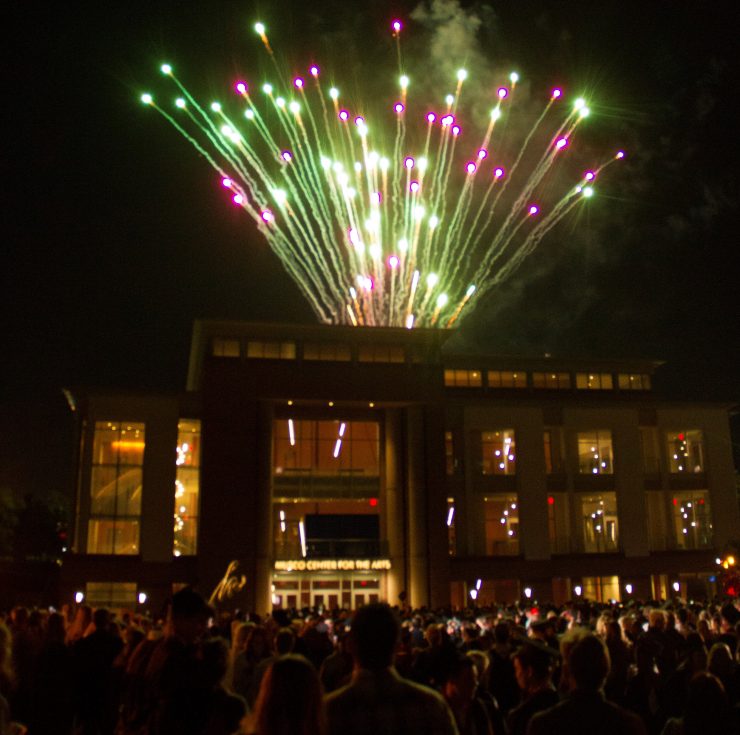 This March, Chapman University will honor the extraordinary contributions of women and their pivotal role in history with a month-long series of virtual events. From film screenings to panel discussions, each event will...