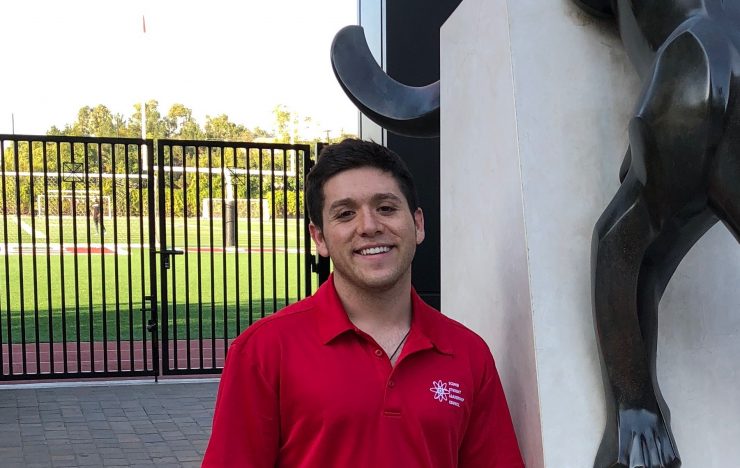 Vidal M. Arroyo, a first-generation student from Rancho Santa Margarita who is completing his studies in biochemistry and molecular biology, has been named Chapman University’s first-ever Rhodes Scholar. Arroyo is one of 32 U.S. scholars selected for a Rhodes Scholarship, which provides all expenses for up to four years of study at the University of Oxford in England.

“I hope to be part of a new paradigm in science,” Arroyo says. “I really want to be a physician-scientist and use artificial intelligence in the treatment of cancer,” Arroyo says.

Following Oxford, he hopes to pursue an M.D./Ph.D. program, possibly at Stanford University.

“The Rhodes Scholarship is considered one of the most prestigious in the world,” says Julye Bidmead, Ph.D., director of Chapman’s Center for Undergraduate Excellence, whose office guides students at Chapman through the complex and competitive process of applying for awards and fellowships. “President Clinton was a Rhodes Scholar, as was newscaster Rachel Maddow and musician and songwriter Kris Kristofferson. From the time I met Vidal in his sophomore year, I knew he was a good candidate. He stood out. He is a sincere and humble young man.”

“As I’ve learned more about Vidal, I have become very impressed with him,” says Daniele C. Struppa, President of Chapman University. “I am very proud to know that he will go down in history as Chapman’s first-ever Rhodes Scholar. He wasn’t even sure he could succeed at Chapman, but, once he met the faculty here who mentored and supported him, he truly came into his own. Vidal is just one example of what happens at Chapman, where faculty are dedicated to helping all our students achieve great things.”

“Chapman saw something in me I didn’t see in myself,” says Arroyo, “and believed in me before I was accomplishing anything worthwhile.”

Academically, this has been a banner year for Chapman University, which was admitted in August to Phi Beta Kappa, the nation’s oldest honor society, which includes just 10 percent of all U.S. universities and colleges.