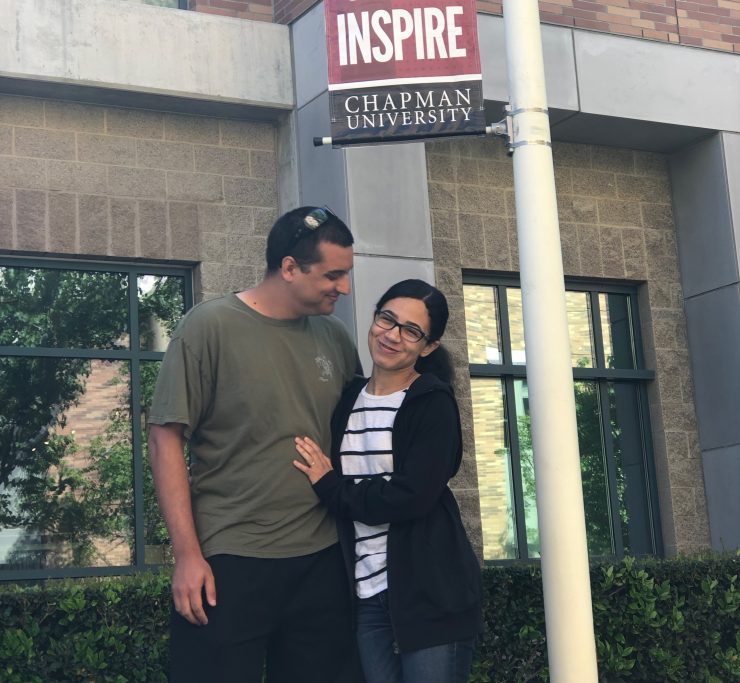 Veteran Sweethearts Graduate Together, Debt-Free Chapman's exemplary veteran students have a lot to be proud of this graduation season.

This commencement season, U.S. Air Force veterans and sweethearts Desaray and Royal Cuevas will both walk onto stage and receive their undergraduate degrees from Chapman University. Desaray walks with a B.A. in English literature, and Royal receives a B.S. in mathematics, with a minor in computational science.

Their journey started at Norco High School, when Royal’s persistent affection paid off and the two finally became a couple. After high school, they briefly separated while starting their military service. In 2009, Royal entered basic training at Hurlburth Field Air Force installation in Florida, and served as a C-130 aircraft mechanic. Desaray went to Davis-Monthan Air Force Base in Arizona and trained for weather forecasting.

As soon as he could, Royal got transferred to join Desaray in Arizona, and the rest is history. They got married, started a family (Gideon, now 4 and Uriah, 7) and are now graduating from a four-year university together. Royal will be the first in his family with a college degree.

Getting the Support They Needed

Both students benefited from the financial support of the Post 9/11 GI Bill and additional funding through the Yellow Ribbon Program.

“The Yellow Ribbon Program is awesome,” says Royal, adding that they wouldn’t have been able to attend Chapman if not for the university’s participation in that additional veteran funding program. The GI Bill covered about half their expenses; the Yellow Ribbon program covered half of the remaining cost and Chapman matched the rest.

“It’s already difficult to go to school full-time and try to raise a family,” says Desaray. “I don’t think I would have been able to do it if I had to work.”

“Desaray and Royal are incredible students,” says Blas Villalobos, Director of Veterans Affairs at Chapman. “I am extremely proud of them and what they are accomplishing.”

According to Villalobos, as of April 2019, 688,481 veterans received funding from the Post 9/11 GI Bill. Of the 15,907 schools approved for GI Bill funding, Chapman is one of just 2,779 schools participating in the additional Yellow Ribbon funding program.

Villalobos goes on to boast these success metrics:

“As a mentor, Desaray is changing lives, and she is the role model I wish all veterans could be.”

One common challenge for veteran students is being older and at a different life stage than most college students. The Cuevases (both 29) faced this challenge.

“Being married with kids and a commuter student made it really difficult to participate in any campus clubs or programs that were being offered,” says Desaray. But this year, she was happy to finally find a meaningful way to get involved on campus — as a veteran mentor.

Chapman launched the Veterans Mentoring Program to connect student veterans on campus with veterans at community colleges and incoming students, explains Villalobos: “As a mentor, Desaray is changing lives, and she is the role model I wish all veterans could be.”

Desaray knows first-hand what a challenging experience it is to come out of the military and start school again. “There’s just a different set of priorities that can hinder meaningful connections between veterans and younger college students,” she says. “The mentoring program aids in forming connections and building up a support group. Even though two veteran students may come from vastly different walks of life, they can connect over military experience and family life.”

The Cuevases both worked hard to meet course deadlines so they wouldn’t need special treatment as parent-students. But as with all students, things came up. The couple are grateful for the support they received in those situations — both at different times had to bring their children into class.

“The military is a great way to jump start your own life, and being able to get a college education like we’ve had here at Chapman without being saddled with debt, that’s a huge benefit,” says Desaray.

Royal, a bit more circumspect about military service, says, “Thankfully nothing fatal happened, but I know people who were injured during their service, so it’s not so easy of a decision.”

To all veterans, Royal advises: “You should use all of your benefits. A lot of people feel like they’re taking advantage, but I don’t see it that way. When you sign up, you’ve signed up to potentially give everything. Anything that’s offered and available to you because of what you’ve put in, you’ve already earned it and you deserve it.”

When asked how they feel going into commencement week: “Relieved,” says Desaray. They’re both ready to start this next chapter of their lives, together. And with no school debt, they’re set up for success.