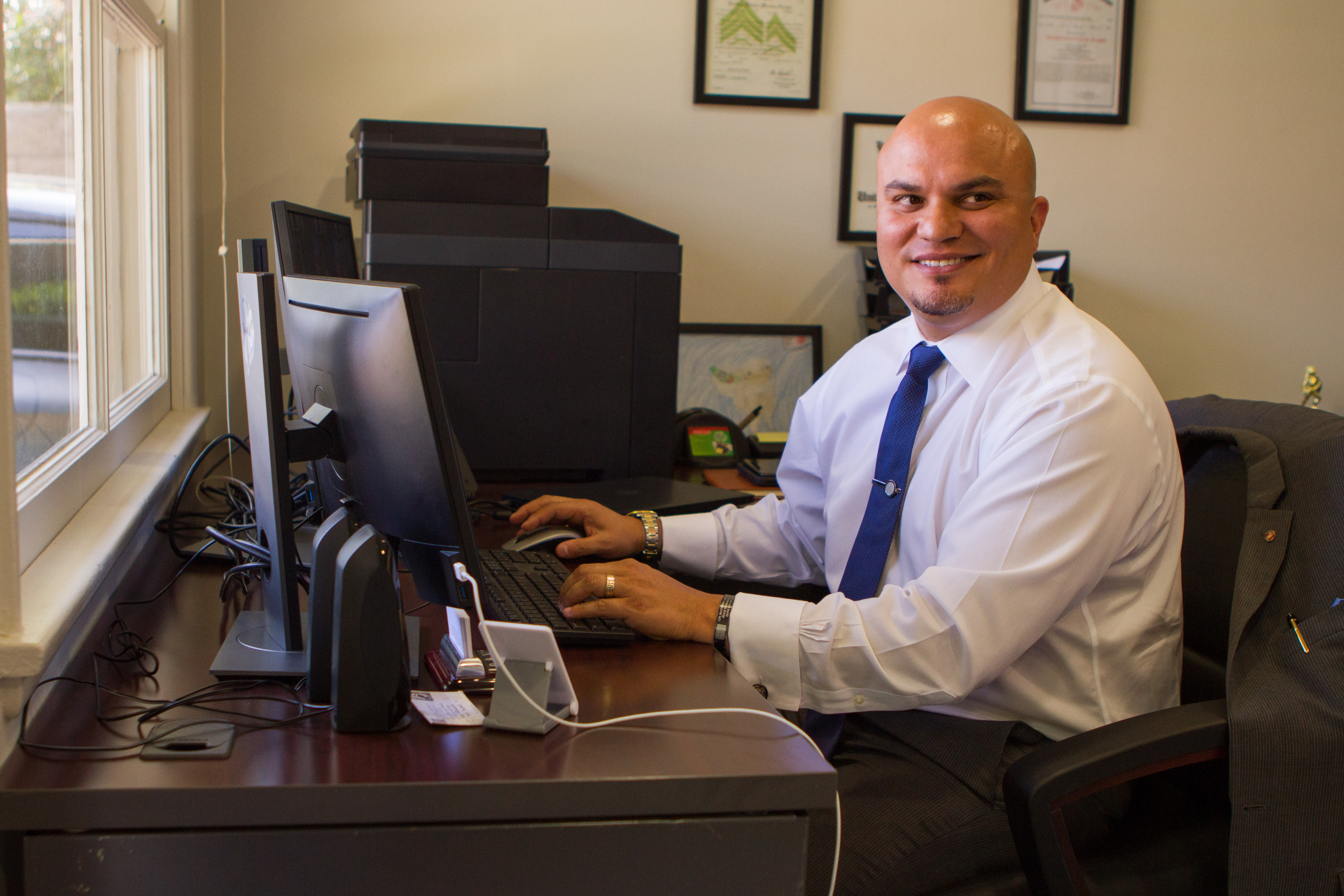 There were many steps and successes on Blas Villalobos’ path to becoming the first director of Chapman University’s new Veterans Resource Center.

Inspiration to join the Marine Corps hit early when a high school friend returned home for a visit, radiating pride and confidence. After his own military service, Villalobos enrolled in college, a journey that will culminate with a doctorate in social work later this year. And it was no small feat in 2015 when he took over the Office of Veterans Affairs for the Los Angeles Mayor’s Office.

But the Iraq War veteran circles back to a classroom insult when he talks about turning points that led him to where he is today. A high school computer science teacher belittled him by asking for an essay on how he entered the United States, alluding to an anti-Mexican slur for crossing the Rio Grande River.

“She asked me to write an article about how I ‘swam across the river,’ which I never did,” Villalobos says.

The insult stung – and it wasn’t an isolated incident. But determination, not bitterness, resulted.

“I thought there’s got to be a way for me to earn respect and get people off my back. So that’s where the military came into play. I figured joining the military would accomplish a number of things. One, I would earn my place. And two, I would give back by contributing to the safety of the country,” he says.

Today he focuses that brand of purpose and energy at Chapman, where he leads efforts to expand the University’s enrollment of veterans and their dependents. He brings a deep understanding of veterans’ interests, having most recently served as veterans affairs manager in the Office of Los Angeles Mayor Eric Garcetti. In addition, he serves on the Advisory Committee on the Readjustment of Veterans, which offers recommendations and policy advice to the U.S. Secretary of Veterans Affairs.

At Chapman, Villalobos is building an environment of support with activities and resources for veterans. When he offers tours of the center, in a remodeled house near the Sandhu Conference Center, he enjoys pointing out the patio.

“I can see us having barbecues here,” he says with a smile.

His office also assists with administration and admissions forms unique to veterans. Among them is paperwork for veterans participating in the federal Yellow Ribbon Program, which partners with colleges and universities willing to offer additional financial aid to veterans and dependents.

His ultimate goal, though, is not to set returning service members apart from non-veteran students, but to help them participate in campus opportunities, graduate and launch careers in which their perspective and experience can benefit everyone, he says.

“Education in general for veterans is very important to me. But there are also so many issues we’re dealing with as a community. We need more vets to take on these challenges, and in order to do so, a high-quality education is important,” he says.

Already Villalobos is busy reaching out to community colleges, civic organizations and veterans groups to help convey that message and planning campus tours for veterans.

Putting Chapman on the Radar

“I want to get Chapman on veterans’ radar,” he says. “Private education seems to be something that veterans are rarely exposed to, unless they hear from us.”

Along the way, he hopes to foster understanding between veterans and non-veterans. Counter to his own experience growing up, he sees campus classrooms as a good place for such dialogue and relationship-building.

“We can definitely bridge that gap,” he says. “It will take time and trust.”