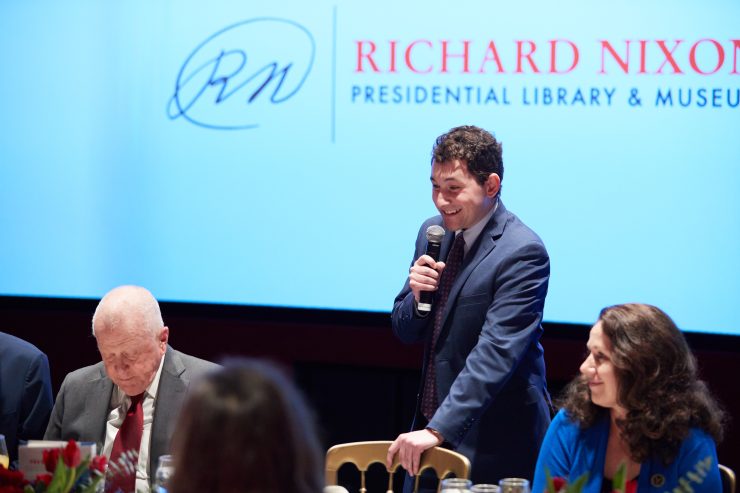 Nixon Foundation Builds Strong Ties at Chapman University with Alumnus at the Helm Jim Byron ’15 hopes to increase the historical understanding of Nixon’s presidency and contribute to civics education in the community.

The pandemic presented challenges to everyone, and museums and other public education institutions were no exception. “Every single one of our revenue streams disappeared, practically overnight,” says Jim Byron ’15, the newly elected president and CEO of the Nixon Foundation, the non-profit organization that operates the Richard Nixon Presidential Library in Yorba Linda, Calif. “We couldn’t do events. We couldn’t welcome museum guests,” he says.

But what they could do was shift gears. During the 14 months that the Nixon Library remained closed to visitors, the foundation shifted its efforts to supporting the local community’s pandemic response. They opened the beautiful replica of the White House East Room for blood drives and food drives. They acquired one million disposable face masks and donated the bulk of them to local schools, businesses and houses of worship to allow people to gather safely.

“We really embraced our role as a partner to so many in the community in a different way,” says Byron. “We still do blood drives regularly and they are always packed … if we can offer those opportunities, if we can be that center where people come to help one another, I think that’s very much in keeping with the mission of the Nixon Foundation.”

Byron, who graduated from Chapman University with a BA in business administration and a minor in history, is intimately familiar with the foundation’s mission. He started working there more than 15 years ago, when he was just a teenager with an interest in history, looking for something to do in the summer.

“I wrote a ‘To-whom-it-may concern’ letter to the Nixon Library, and much to my surprise, I received a response,” says Byron, who was offered an internship working for a few hours a week in the marketing department. “It was an invaluable experience because I was learning the ins-and-outs of marketing and management and how to work with people at a very young age, opportunities that not many high schoolers are given.”

Byron continued to work part-time for the foundation throughout high school and college, with increasing areas of responsibility, ultimately leading to a full-time position. In 2016, he led the reopening of the Library after its $15 million renovation, and from 2014 to 2017, he worked as the coordinator of the foundation’s $25 million capital campaign. Most recently, he served as executive vice president, under former Nixon Foundation president and Chapman law professor Hugh Hewitt.

Becoming a Center for Presidential Studies

While President Nixon’s political legacy is complicated, Byron is enthusiastic about the opportunity to deepen the understanding of the former president’s administration. “There are 46 million pages of material from President Nixon’s life here at the Nixon Library,” he says. “There’s two million feet of film. There are 300,000 photographs. There are 3,600 hours of White House tapes. Only a fraction of this material has been fully gleaned by historians and scholars and students.”

That’s where Byron hopes the foundation’s strong ties to Chapman will come into play. The two institutions have already worked together to create opportunities for students to come in and do hands-on research at the library. The new Presidential Studies program in Wilkinson College of Art, Humanities, and Social Social Sciences, which was launched last year with two fully-endowed chairs, is another milestone in the growing, mutually beneficial partnership between the university and the library. One of the chairs was funded by James Cavanaugh, the current chairman of the Nixon Foundation’s Board of Trustees.

“Not every undergraduate student has an opportunity to go to a presidential library near their campus and dig through the papers,” says Byron. “It’s a really unique opportunity and I think will help to put Chapman on the map as a center for the study of the presidency.”

Now that the library is open to visitors once again, Byron hopes to increase attendance over the next few years through a series of inventive special exhibitions, including a just-announced interactive exhibit about espionage during the Cold War. And of course the library will continue to educate the public about the achievements of the Nixon presidency that still impact our lives today, such as the National Cancer Act, the Clean Air Act and the Endangered Species Act.

“I learned recently that when he was a young congressman in the late 1940s, Nixon was pressuring the Truman administration to put a national health care plan into effect,” says Byron. “That was really surprising to me.”