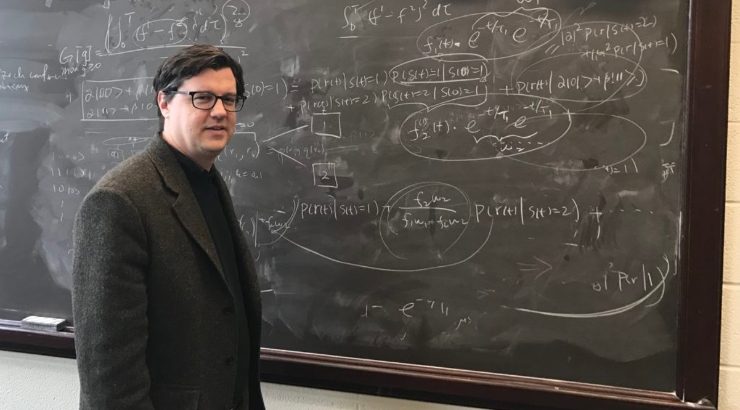 Ever since high school, Andrew Jordan has been fascinated by the promise and possibilities of quantum mechanics. So much so that he has devoted his professional life to the study of matter and light on the atomic and subatomic scale.

“Part of the excitement is that things in nature can transcend our ability to grasp them at any kind of fundamental level,” said Jordan, an internationally recognized theoretical physicist who joined Chapman University in fall 2021 as co-director with Jeff Tollaksen of the Institute for Quantum Studies (IQS).

“You can get some experience with [quantum physics], and you can become used to it, but it’s still as mysterious as when you first encounter it,” Jordan added.

The mystery just adds to the allure, encouraging him to dive deeper into quantum research and teaching.

“Part of the vision for doing quantum foundations is to try different angles to understand concepts from different points of view,” Jordan said. “That can lead to different lines of approach to the same kind of phenomena.”

Now, as leader of a Chapman program that for more than a dozen years has attracted some of the best minds in the discipline to join in collaborative research, Jordan is working to build on IQS achievements – to transform curiosity into tangible advances that expand the scope and vision of the institute.

Thanks to the 2008 arrival at Chapman of renowned quantum physicist Yakir Aharonov, IQS is grounded in foundational topics like weak values and superoscillation. Aharonov, winner of the National Medal of Science, has pioneered mind-bending concepts, including that time can flow backward and subatomic particles are changed by far-away forces.

“Part of the reason I’m here is that I’m interested in those things too, but we’re working on lots of other things as well,” Jordan said. “For instance, quantum thermodynamics is a subject I’m excited about, and there’s a lot of activity going on with quantum metrology – the science of using quantum mechanics to do precise measurements.”

Technologies based on such research might lead to the development of tiny gyroscopes that run on very little power, expanding options for navigation and making it more precise.

In addition, research by Jordan that was published last year in the journal Nature Communications illuminates a weak value amplification technique that can be used to precisely measure the properties of light guided by waveguides fabricated on a Silicon chip about the size a quarter. By using light instead of electricity, the chip might be used for everything from stabilizing lasers to aiding with the remote sensing of objects.

A Global Community of World-Class Thinkers

The IQS culture of creative breakthroughs first attracted Jordan to Chapman years ago, when he was a professor in the Department of Physics and Astronomy at the University of Rochester. In 2012, he became an IQS affiliated scholar, joining a collaborative global community that also includes Nobel laureates Sir Anthony Leggett, David Gross and François Englert, as well as celebrated cosmologist Paul Davies.

But even as that community grows and the opportunities for high-level research expand, Jordan says the team will continue to fulfill another IQS mission: to promote quantum literacy with engaging public talks.

A recent example is Davies’ presentation “What’s Eating the Universe? And Other Cosmic Questions,” delivered during Homecoming.

“It’s our goal to not only educate our students but also the general public about important discoveries and the world we live in,” Jordan said.

To enlighten, yes, but not necessarily to demystify.

“Because we’re often mystified ourselves,” Jordan said with a smile. “It’s more about sharing the mystery.”

Learn more about the Institute for Quantum Studies and view a series of popular talks on the IQS YouTube channel.