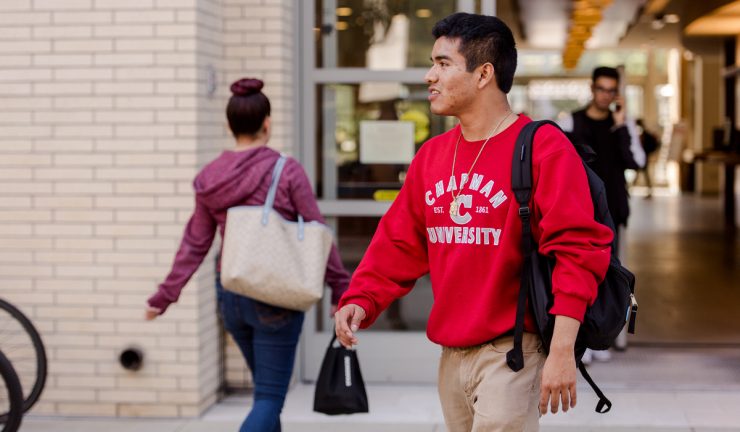 Though the first presidential debate of the 2020 election was contentious, the dialogue was respectful and engaging during a post-debate discussion organized by Chapman University Civic Engagement Initiatives and the Department of Political Science.

The goal of the discussion after the presidential debate was “to give students the opportunity to become more informed and better engaged,” said Tim Topper, program coordinator in the Department of Student Engagement at Chapman. Topper organized the discussion Tuesday evening.

“Our students are tuned into what’s happening during this election, and they’re wanting to ask questions,” Topper noted. “By providing faculty facilitators, we’re able to help create an environment in which that conversation can thrive.”

The discussion in a Zoom gathering followed a presidential debate the students and professors variously described as “political theatre,” “a hurtling locomotive” and “a mess,” relating what they saw from President Donald Trump and former Vice President Joe Biden on stage in Cleveland Sept. 29.

“My initial reaction is that I have a headache,” one student shared early in the post-debate discussion. “I don’t know what just happened.”

The two faculty members in the conversation — Chapman political science professors Lori Cox Han and John Compton — voiced similar reactions to the first of four debates in the run-up to the Nov. 3 election. Chapman also hosted discussions involving students, faculty and others after the vice presidential debate and the final presidential debate.

“I always say that debates are political theatre, and that was certainly the case tonight,” said Han, Ph.D., presidential scholar and author of multiple books on the presidency, including “In It to Win: Electing Madam President” and “Advising Nixon: The White House Memos of Patrick J. Buchanan.”  “I think tonight’s debate was exhibit A as to why debates may have outlived their usefulness.”

“I’ve never seen anything like this,” added Compton, Ph.D., who has been evaluating presidential debate performances since 1988.

Repeatedly disregarding the rules and talking over a debate rival are “new developments,” Compton said. “The format just doesn’t work if the candidates are not going to stick to a time limit or allow each other to talk, so I’m tempted to agree that the format may have outlived its usefulness.”

Though cogent arguments on important issues were missing from the first presidential debate, they are happening at Chapman. During the post-debate discussion, topics such as climate change and the expected Supreme Court nomination of Judge Amy Coney Barrett were touched on.

Jasmin Sani ‘21, editor-in-chief of The Panther newspaper at Chapman, was disappointed that she didn’t hear more substance from the candidates.

“I feel like this was supposed to help swing voters,” she said, adding that what was presented only made things harder for the electorate.

Such considerations are encouraging respectful debate throughout this election season, as Chapman’s Civic Engagement Initiatives team is connecting student voters with the tools and resources that they need to confidently participate.

Connecting Students with Resources They Need to Participate

The fall semester at Chapman was filled with virtual events and programs leading up to the November election. These online experiences brought broad awareness addressing everything from national issues to state-by-state registration requirements and ballot initiatives. Among the resources were Chapman’s CU at the Booths web page, plus informative Instagram content on the @LifeatCU and @ChapmanCivic accounts as well as virtual tabling sessions and other online materials with guidance about the vote-by-mail process.

In addition, Chapman was one of about 200 Vote Centers in Orange County, providing a one-stop location for voting, ballot drop-off, voter registration and a variety of related services. The university hosted an Orange County Vote Center in Argyros Forum 119 from Oct. 30 to Nov. 3.

Chapman Is ALL IN to Reach 100% Campus Voter Registration

These efforts to ensure a strong student voter turnout align with the university’s ALL IN Campus Democracy Challenge (ALL IN) pledge, as Chapman is committing to 100% student voter registration and participation. ALL IN is a national initiative recognizing and supporting campuses as they work to increase nonpartisan democratic engagement.

Chapman has a longstanding tradition of political and civic engagement. In the last two recognition cycles, the university has earned distinction as a “Voter-Friendly Campus” by the national nonpartisan groups Campus Vote Project (CVP) and NASPA – Student Affairs Administrators in Higher Education. Chapman is one of only five higher education institutions in California to receive this designation.