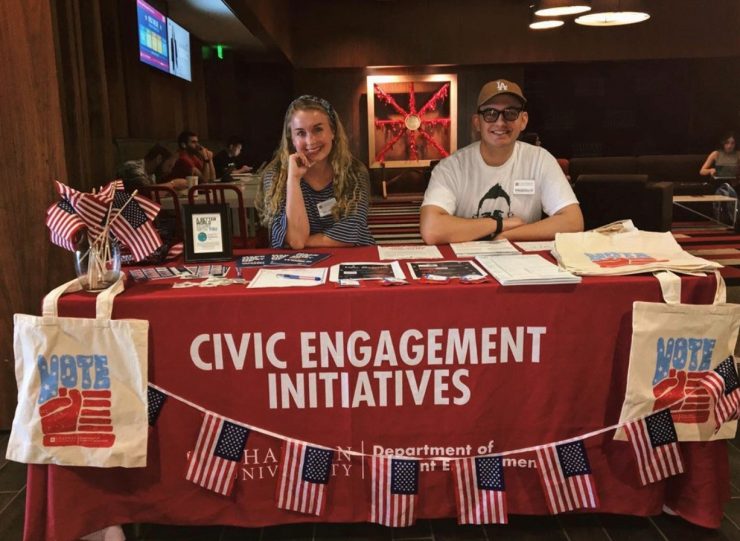 With the fall semester at Chapman being remote, an active civic engagement campaign filled with virtual events and programs ledg up to the November election. These online experiences were designed to bring awareness about the differing state-by-state registration requirements and on the various issues and initiatives on the ballot. The activities ranged from informative Instagram content on the @LifeatCU and @ChapmanCivic accounts to virtual tabling sessions to online materials that give guidance about the vote-by-mail process.

“All incoming and current Chapman students can access these resources and be part of the conversation,” said Shishei Tsang, program coordinator of Student Engagement.

Chapman ALL IN to Reach Total Campus Voter Registration

These efforts to ensure a strong student voter turnout align with the university’s recent ALL IN Campus Democracy Challenge (ALL IN) pledge, where Chapman is committing to 100% student voter registration and participation. ALL IN is a national initiative recognizing and supporting campuses as they work to increase nonpartisan democratic engagement. The pledge is a nationwide commitment with involvement from more than 160 college presidents and chancellors of campuses such as UC Berkeley, Brown University, John Hopkins University, Stanford University and New York University.

“Chapman’s curriculum is centered around global citizenship and an important component of that mission is to maintain civic engagement,” said Daniele Struppa, Ph.D., president of Chapman University. “We are committed to full student voter participation by providing opportunities that will rally and empower our students to register, turnout to vote and seize their voice to make an impact.”

Over the last eight years, there has been a consistent trend in an increase of Chapman students both registering to vote and submitting their ballots. For the 2016 presidential election, over 80% of Chapman students registered to vote. This year, the goal was to reach that 100% registration and participation mark.

As a commitment campus for the ALL IN pledge, Chapman’s Student Engagement Department also met bi-weekly with other involved colleges to share its civic engagement ideas and plans.

“We’re unique in that Chapman’s Civic Engagement Initiatives is housed within the Department of Student Engagement. Most campuses do not have that sort of functional area in their student affairs division,” said Justin Koppelman, Ph.D., associate director of Student Engagement. “That has pushed us to think about civic engagement in the novel way that we do, and we’re doing what people consider to be the model across the country for this kind of work in the university environment.”

Chapman has a longstanding tradition of political and civic engagement. In the last two recognition cycles, the university has earned the distinction of being a “Voter-Friendly Campus” by the national nonpartisan groups Campus Vote Project (CVP) and NASPA – Student Affairs Administrators in Higher Education. Chapman is the only higher education institution in Orange County and one of five campuses in California that has received this designation.

With this election season being in the midst of the COVID-19 health crisis and the racial and social justice protests, it was a crucial time for college-aged voters to get involved with political and voter engagement towards the issues that they care about, says Tsang.

“As a student, you might feel like, ‘I’m just a student. I’m powerless.’ But being able to vote is your privilege and power to make changes happen, and if you have that privilege and that power, you should use it,” Tsang said.

No matter where students are this fall or how they decide to cast their ballots, the Civic Engagement Initiatives team is here to help make voting easier.

The latest Chapman civic engagement news and events were posted on these social channels. Students were encouraged to give these accounts a follow and visit them regularly to stay involved.

Since the physical Global Citizens Wall in the Argyros Student Union was not accessible during fall for students to write on, there was a virtual version instead! A new question about a current event was posted on the @LifeatCU Instagram account twice a week to allow students to share their thoughts. Responses were collected and posted on an online CEI news article every week to foster dialogue and civic learning.

“You have the choice to change the world as you move through it or not. So if you want to be a part of your future and how you experience your life in the future, voting is a way to do it,” Koppelman noted. “By making the time to vote in this election, you’re getting yourself into the habit of continuing in every election that follows and you’re contributing to a whole lifetime of democratic engagement.”