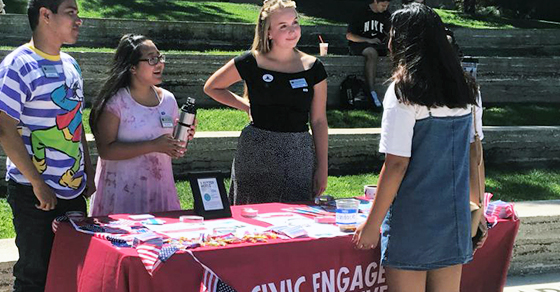 The Results Are In — Chapman University Named a ‘Voter-Friendly Campus’

Chapman University has once again been named a “Voter-Friendly Campus” by the national nonpartisan groups Campus Vote Project (CVP) and NASPA – Student Affairs Administrators in Higher Education. The honor is given to schools that have implemented programs and efforts to bolster student participation in the political process.

Chapman’s 2018 midterm voting rate increased to 44.2% from 14.7% in the 2014 midterm election cycle. That increase coincided with numerous campuswide initiatives launched by the Department of Student Engagement, as recognized by CVP and NASPA. Among the efforts:

Although pegged to the most recent election season, the efforts reflect a longstanding tradition of political and civic engagement among Chapman students, said Justin Koppelman, Ph.D., associate director of Civic Engagement Initiatives.

“It’s encouraging to see the Chapman student voting rate increase above the national average for the second time. A strong network of faculty, staff, and students work very hard to ensure students have access to register in the state of their choice, are knowledgeable about voting requirements and deadlines, and are informed when making their vote.  As a Voter-Friendly Campus, we should be very proud of this great accomplishment,” Koppelman said.

This is the second time the office of Civic Engagement Initiatives has earned the distinction for Chapman.