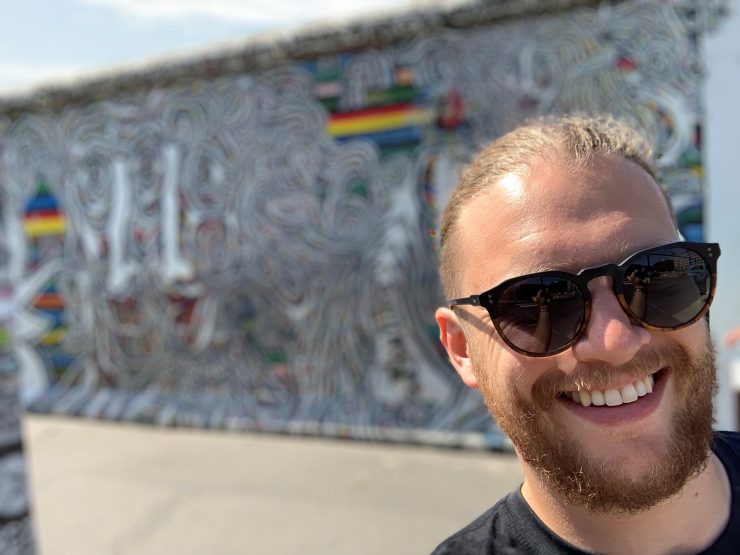 Chris Herrmann ’15 has always been a go-getter. The Chapman University graduate-turned-teacher is the recent recipient of a Fulbright Fellowship to Greece.

The Fulbright Program offers competitive fellowships to young professionals to study, teach English or conduct research. This year, just 13 individuals were accepted to the highly competitive Fulbright English Teaching Assistant program in Greece and Herrmann was one of them.

And who were among the first people he told about his award?  His Chapman professors.

“One of the biggest things that has happened in my life was meeting Bart and Jan,”  Herrmann says. That’s Bart Wilson, Donald P. Kennedy Endowed Chair in Economics and Law and director of the Smith Institute, and Jan Osborn, associate professor with the Smith Institute and the Wilkinson College of Arts, Humanities, and Social Sciences.

When Herrmann was just a freshman he enrolled in a First-year Foundations Course taught by Osborn and Wilson, which happened to be on humanomics, a field that seeks to bring a human focus to economics.

The course led to Herrmann’s fascination with humanomics, as well as summer research in experimental economics with the Economic Science Institute Summer Scholars Program and a presidential seminar with the Smith Institute.

You don’t have to know what you want to do. Take the time while you’re in college to explore things that will push you and push your boundaries.

But Herrmann didn’t always know what he wanted to study in college. In fact, he didn’t know anything about research or economics. “I started college as a history major. Taking the class in humanomics gave me a whole new perspective on how people make decisions, and how those decisions created the society we live in.  I walked into it—I had no idea.”

Herrmann majored in sociology and was also able to create a unique, self-designed humanomics minor that is now a fully established minor at Chapman.

“You don’t have to know what you want to do,” Herrmann reflects. “Take the time while you’re in college to explore things that will push you and push your boundaries.”

Herrmann’s relationship with his professors is not at all unique. Chapman University is ranked No. 3 in “Best Undergraduate Teaching” and No. 3 in “Most Innovative Schools” by U.S. News and World Report. And his experience reflects those rankings.

Herrmann’s undergraduate experience gave him both the confidence and edge to be accepted into Teach for America, the competitive post-grad, two-year teaching program focusing on improving lower-income schools through hiring smart, energetic, young teachers. Herrmann fell in love with teaching and continued to work at Denver public schools for an additional two years.

“I would tell my high school seniors who are choosing colleges to think about what their day-to-day will look like. Will there be 300 in my class or 15? Will my professor know my name?”  Herrmann says.

His teaching philosophy reflects his Chapman experience: “I’m not a teacher for perfect paragraphs,” Herrmann says, “I view teaching as a relationship. My goal is for each kid to say I really enjoyed Mr. Herrmann’s class, and I learned without even knowing it.”

At Home in Greece

For Herrmann, a Fulbright allows him to continue teaching while learning as much as he can about life in another country.

“This specific Fulbright program in Greece was calling my name,” says Herrmann. “The candidate profile checked off every box that I have. It wanted passionate educators, previous teaching experience, someone’s who’s active, and someone who’s shown a history of doing multiple things.”

Now well into the semester, Herrmann reports that he feels at home in the town of Chalandri, a small suburb of Athens.

“Teaching in Greece has been truly fantastic so far. The kids here are great and it is clear that American and Greek students are much more similar than they are different,” says Herrmann. “The students are extremely interested in what life is like in the U.S. and we have started some class pen-pal communication between my former American students and some of my current Greek ones.”

Wilson, Herrmann’s former professor says, “The Fulbright committee chose well.  Herrmann is the type of teacher who will find a way to incorporate the lessons he learns in Greece into his teaching when he returns, and I have no doubt he will enrich the lives of the students he touches in Greece.”

When asked if he has any wisdom to share with future college students, Herrmann concluded: “It’s less about getting the degree and more about creating relationships—be it friendships that will last forever, or professional relationships with people who will mentor you through your career. In the end, you’re gonna have fun in college no matter where you go.”