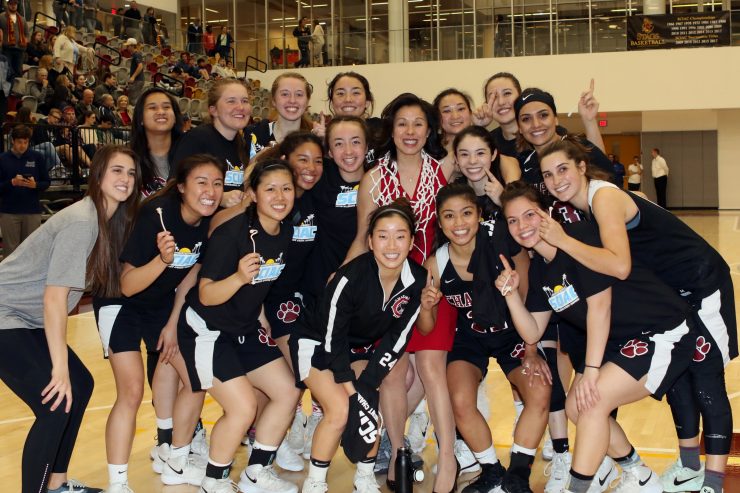 Spring was a season of success for Chapman’s athletic programs, two of which won conference championships.

Chapman’s baseball team also won its first SCIAC tournament championship, thanks to an improbable comeback. The Panthers were down 10–1 in the title game before rallying to defeat Redlands, 20–12. Among the big hits were a three-run homer by senior Gavin Blodgett and a two-run double by Jared Love. Blodgett and Love combined for 11 RBIs in the victory, which earned the Panthers an automatic berth in the NCAA Division III Baseball Championship. Chapman was eliminated with a 6–2 loss to UT-Dallas on May 19 in Spokane, Wash. The Panthers finished the season with an impressive 35–13 record. Blodgett and juniors Tyler Peck, Matt Mogollon and Tristan Kevitch were named to the American Baseball Coaches Association/ Rawlings All-Region Team.

Chapman’s men’s lacrosse team made it to the MCLA Division I National Championship game for the third year in a row. There, the Panthers suffered their only loss of the season, falling to Michigan State, 10–8, in Salt Lake City. Senior Dylan Garner scored three goals to spark the Panthers, who have qualified for the Final Four each of the past five seasons.

Freshman Alisa Ogranovich became the first Chapman women’s tennis player to earn a major SCIAC award. She was selected as the SCIAC Newcomer of the Year.

Freshman Michaela Foisy of Chapman’s softball team broke the school stolen base record with 53 in just the last two seasons. She also led the Panthers with 61 hits, 37 runs scored and five triples.

Head coach Will Marino and his staff were named SCIAC Coaching Staff of the Year in women’s tennis.

Senior Stacey Zuppa of Chapman’s women’s lacrosse team broke the University all-time points record with 55. She also earned a spot on the All-Region Team with her record-breaking performance.

Display image at top/Chapman basketball players pose for a championship photo with coach Carol Jue after the Panthers defeated Claremont-Mudd-Scripps in double overtime to win the conference tournament. (Photo/Larry Newman)