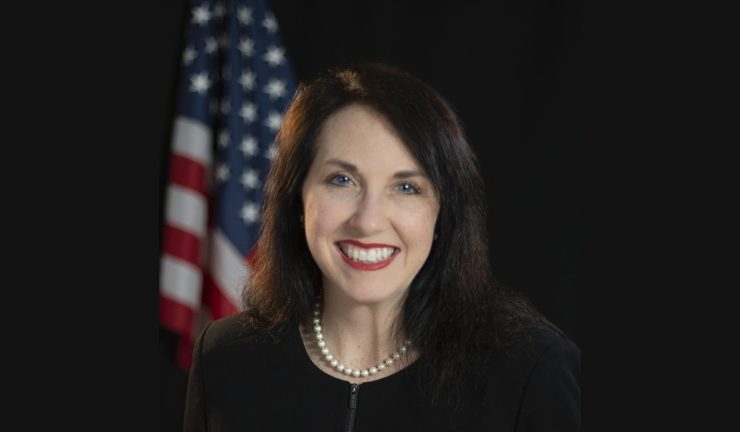 As the CEO of Military Children’s Charity – a nonprofit founded by her own son when he was 14 years old – Cherie L. (Navarro) Johnston ’06 (MBA ’16) has been helping military kids since 2010.

“I am incredibly passionate about acknowledging and recognizing our American servicemembers’ children,” says Johnston.

Under Johnston’s leadership, the all-volunteer nonprofit has distributed over 145,000 gifts of appreciation to U.S. military families, across every service branch of the U.S. Armed Forces.

“We have hosted countless events for the U.S. military, including holiday family day gatherings, seven baby showers, and an event where we distributed 16,000 items of new clothing to the children. Also, through our Richard K. Johnston Bereavement Program, we have been able to serve over three dozen bereaved children, year round, with gifts of appreciation. Many of these children and teenagers had parents serving in the U.S. Special Forces,” says Johnston.

“It has been my greatest honor and privilege of my career that the U.S. military has allowed me to work directly with and serve their families in this capacity,” she adds.

In fall 2021, Johnston and her organization were also able to help 17 Afghans successfully flee Kabul, Afghanistan, a collaborative effort with Chapman University to bring them to Orange County and help them resettle in the U.S.

Meanwhile, Johnston also manages a full-time job in international business, a career that started with an undergraduate internship with the U.S. government and a post-graduation position on the campaign staff of U.S. Rep. Ed Royce, at the time serving as chairman of the Subcommittee on Terrorism, Nonproliferation and International Trade.

“My ambition in pursuing my degrees at Chapman was to work in international/global business at the highest levels,” says Johnston, who earned a BS in business administration with dual emphasis in international business and economics in 2006 and returned to Chapman for her MBA.

That ambition has been fulfilled: Johnston is currently employed with Panasonic Avionics, the aerospace division of Panasonic, part of a division that provides in-flight entertainment systems and satellite connectivity to aircraft and brings in billions of dollars for the corporation.

Johnston is also the president of the Veterans Business Impact Group for all Panasonic’s companies in North America, where she created a professional development interview series which features high-level military leaders live, such as Lt. Gen. Michael Howard. In January 2023, she will interview retired U.S. Army General David Petraeus.

“I enjoy being able to bring my decades of experience with the U.S. Military into Panasonic and apply that to support our American veterans in this capacity,” says Johnston.

What’s next for Johnston? Space, apparently! Along with her son, who is now a rocket scientist for Northrop Grumman Space Systems, Johnston started a space launch vehicle company, is a leading member of the Space Propulsion Synergy Team (SPST) sponsored by NASA, and is planning to become the CEO of her own space systems company within the next five years.

“For the long term, my ambition has always been to become the U.S. Secretary of State,” says Johnston. “I am certain that my education at Chapman University, the incredible personal network that I have amassed the past two decades and my work experience will ultimately lead me to achieve this position.”

Here’s what Johnston has to say about her time at Chapman, along with some helpful advice for new alumni.

Dr. Don Booth was absolutely the most influential person to me at Chapman University during my time as an undergraduate. I added the economics emphasis to my degree because I so enjoyed his class. He challenged us to not only memorize the entire map of the world, but to be able to list the capital of every nation on earth, list its top exports/imports and know something about its government, etc.

When I spent years following Congressman Royce, this in-depth knowledge of the world helped me immensely, and now working in international business, I am a subject matter expert. I have always pushed myself further to learn more about the world we live in and find unique sources of information. I studied Arabic for eight years to learn a non-romance language.

Dr. Booth certainly had an influence on my worldview. He was originally my adviser, but I went to him with everything. Eventually, I would just show up to chat. Following my graduation, for years, I came to events with Dr. Booth. He wrote letters of recommendation for me. As an alumna I traveled to Tijuana, Mexico, with him to visit the Maquiladoras. He became a consistent part of my life and I considered him not only a mentor, but my close friend. When I completed my MBA and started my space systems endeavor, he even agreed to sit on our advisory board to guide me.

There is nothing at all that I would do differently. Chapman was an amazing experience, beginning to end. I would like to experience the trip to Brazil again. That was really special and new. I learned so much about international business and humanity on that trip and am eternally grateful to Chapman for pushing me far outside my comfort zone to do it.

What do you wish you knew at the time of your graduation that you know now? What advice can you give to the students and/or recent graduates of today?

The one thing that I knew during my time at Chapman was that I wanted to experience as much as possible, do as much as possible, and I did it all. I do not think I slept much the entire time I was there. My advice would be to have a plan, but also to be flexible, that plans do change/evolve, and to keep yourself open to any new opportunities.

I could not have imagined as a new undergraduate that I would be following around one of the heads of our U.S. Congress for a few years, or years later spending my days and nights on U.S. military bases as the CEO of a nonprofit, or learning to speak Arabic and working in aerospace on a team making billions of dollars, or getting to interview some of America’s top military leaders and run a U.S. veterans program. All amazing experiences that came into my life because I was completely open to meeting new people and things and not glued to a career plan.

Were there any major societal issues in our country/world that you recognized or faced as a young college student?

I have always been a devout Catholic from birth, and that has not changed at all. I brought those values with me to Chapman and I have lived them as a part of my life, always seeking to perform acts of mercy and charity. I believe my experiences at Chapman helped mold my leadership style, which is absolutely “servant leadership.”

Also, as previously shared, being exposed to such a talented and diverse team of professors, many from different parts of the world, was hugely impactful. In my MBA program, at least half of my cohort was from Saudi Arabia and I loved this experience, not only to practice my Arabic, but to absorb what I could about their culture. My company does a lot of business today with the Saudi Arabian government, and I have these lifelong connections through my time at Chapman.

Also, as a result of my meeting and getting to know Fahima Amini, an Afghan female lawyer, in our International Relations class together, this developed a lifelong friendship between us. This led to our being able to get her safely out of Kabul, Afghanistan, with her family, and none of that would have happened if not for Chapman University introducing us.

Do you have any other words of wisdom for students and new grads of Chapman University?

Enjoy the journey and your time at Chapman. We are always so focused on getting to the end objective, and it truly goes by so fast. Soon enough you will be working and hustling to ensure you are meeting all of your endless responsibilities. For now, take a moment and enjoy being a student. Enjoy those first incredibly exciting new career steps. Even if it is not your dream job, every single experience is building towards it.