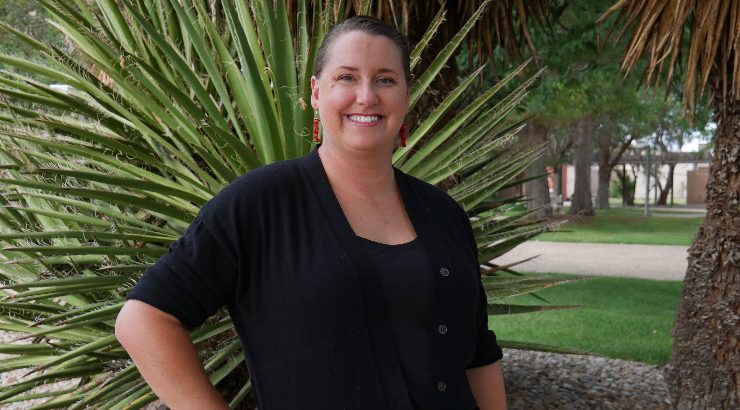 “The impact they had on me ... was transformational," Edna (Best) Yokum '09 says of Chapman professors Paul Apodaca and Ron Steiner. "Now I want to be that person for the students I serve.”
Alumni

Inspired by Mentors and Indigenous Heritage, She Helps Students Find Their Way For Edna (Best) Yokum ’09, teaching where she’s needed most is a commitment and a calling as she pays forward the support she received from Chapman professors.

When Edna (Best) Yokum ’09 introduces herself to strangers, she uses both English and the Indigenous language of her Osage heritage as she embraces the name a tribal elder gave her.

“I am Son-se gra Footprints in the Woods,” she says, “from the Grayhorse District of the Osage Nation.”

When she was a child, her footprints could be found far off any beaten paths as she explored forests and mesas during trips to Northern Arizona. Sometimes she struggled to find her way back to the trail and to her family. It wasn’t the last time she would feel lost.

Early in her college experience at Chapman University, Yokum wasn’t sure she fit in and didn’t know what she wanted to do with her life. She fights back tears as she remembers the turning point in her journey a decade ago. Chapman mentor professors Paul Apodaca and Ron Steiner helped her find her way.

“They saved a person who needed guidance,” Yokum recalls. “The impact they had on me and what I wanted to do with my life was transformational. Now I want to be that person for the students I serve.”

Now a professor of anthropology and sociology at Eastern New Mexico University-Roswell, Yokum assists a community rich with Native American and Latinx culture and traditions but sometimes thin on resources. Census data show that more than 20% of the local population live below the poverty line.

Yokum opens her office and her heart to both smooth the way and expand the thinking of students who have few familial links to the college experience.

“I work at a community college where most of my students will become welders, HVAC technicians, airframe mechanics, paramedics or nurses. These students will make transformational changes not only with their work but in their communities,” Yokum says.

“I’m lucky enough to teach classes where I get to pull in the Dr. Apodaca and Dr. Steiner lessons about equity and equality. I also get to be a point of contact for students to help them figure out where they’re going and what questions they should be asking. They’re encountering obstacles, and they don’t know what they don’t know.”

To aid students with their discovery, Yokum devotes class time to barrier-breaking exercises like improvisation and active learning. Small-group work helps students develop relationships with their peers and with mentors. This work happens after she spends the first 10-15 minutes of class getting to know what she doesn’t know.

Sometimes it’s as simple as asking, “How are things going? Have you gotten your books and your financial aid? Were you able to find the child care you needed? You have a midterm coming up – have you started to study?”

‘We Need to Build as Many Bridges as Possible’

“I do this specifically to model the ways that we need to navigate the higher-ed system,” Yokum says. “We need to build as many bridges as possible.”

Steiner and Apodaca aren’t surprised that Yokum is a champion of access and student support.

“My perspective is that Edna could be on an Ivy League faculty path because she’s smart and she’s driven, but she chooses to work where perhaps she’s needed most,” says Steiner, Chapman pre-law advisor in Wilkinson College of Arts, Humanities, and Social Sciences.

Apodaca, an associate professor emeritus of sociology at Chapman and a founding consultant for the Smithsonian Institution National Museum of the American Indian, remembers Yokum as a self-starter motivated by “commitment rather than ambition.”

“A dedication to pursue the betterment of their communities and the nation is a common feature amongst American Indian scholars and leaders,” he adds.

During Yokum’s time at Chapman, Apodaca helped her find her way to the highly selective UCLA Graduate Program in American Indian Studies, from which Apodaca also graduated and where he has taught as an adjunct professor. Yokum went on to do Ph.D. course work in American Indian/Native American Studies at the University of Arizona.

In 2020, at the invitation of Steiner and Wilkinson College Dean Jennifer Keene, Yokum gave a virtual talk as part of Wilkinson’s “Engaging the World” series.

“She blew us away with her knowledge of the ‘Reign of Terror’ Osage Indian murders,” Steiner says. “I do a lot of Indian culture work, and I had never heard of the story.”

In Touch With Her Native Culture and a Painful History

Yokum’s master’s thesis was on a Supreme Court case about the disestablishment of the Osage reservation in Oklahoma, and her great-grandmother and grandmother helped found the United Osages of Southern California. It’s through those connections and her academic research that Yokum came to know the story from the 1920s of how the discovery of oil on Osage land in Oklahoma sparked a string of murders.

Investigation of the murders by federal authorities was crucial to the formative years of the FBI. The story is told in “Killers of the Flower Moon,” a book by David Grann, as well as in a film of the same name, directed by Martin Scorsese and starring Leonardo DiCaprio and Robert De Niro. The film is expected to premiere at the Cannes Festival in May 2023.

“My research delved into this area because I was trying to prove that a mass exodus in the 1920s and ‘30s is why there aren’t as many Osages in Oklahoma today,” Yokum says.

After her mother died when she was a child, Yokum was raised in Southern California by her non-Native father. Her ties to her Osage heritage became overshadowed by other interests, including competitive swimming – a passion she pursued while at Chapman.

She says her life is infinitely richer now that she connects deeply with her heritage and because she nurtures bonds with her students that cross generations and cultures.

“I came to Chapman trying to find myself, and I was blessed because Dr. Apodaca was my teacher in my freshman seminar class,” she says. “He not only believed in me but he kept challenging me, which was incredibly powerful. He and Dr. Steiner shifted how I see the world.”

Now, as a faculty member herself on the high plains of eastern New Mexico, Son-se gra Footprints in the Woods, from the Grayhorse District of the Osage Nation, pays that impact forward.

“I have successfully navigated systems built to exclude me, and my soul tells me that my job is to help these students,” Yokum says. “It is a calling more than anything else. It is who I am.”