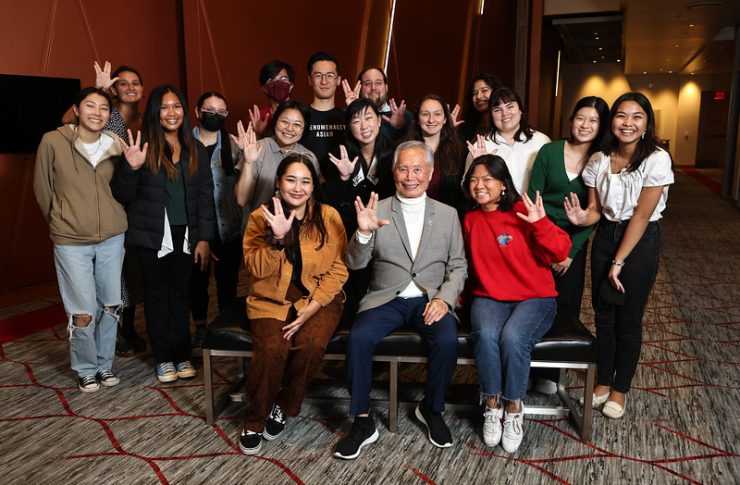 Takei – perhaps best known as helmsman Hikaru Sulu of “Star Trek” – recounted “the terror of that morning” his family was forced from their home and taken to prison camps, along with his father’s enduring faith in democracy and Takei’s subsequent work.

Takei appeared before a packed house at Chapman’s Musco Center for the Arts on Nov. 3 as part of Wilkinson College of Arts, Humanities and Social Sciences’ “Engaging the World” series and Musco‘s Leap of Art series. “Engaging the World” has a theme on a social issue every year – the 2022 theme is “Leading the Conversation on Ethnic Studies.”

Ahead of Takei’s appearance, Wilkinson led discussions and student readings of Takei’s graphic memoir “They Called Us Enemy”, which recounts his family’s experiences in internment camps set up to incarcerate Japanese Americans.

Lisa Wong ’25 said she was proud to see the crowd welcome Takei and listen to his story.

“It’s truly a wonderful feeling to see someone widely respected who looks like you, whose personal experiences are a part of your American history, be the main focus of everyone’s attention simply because they want to be there,” said Wong, a broadcast journalism and documentary filmmaking major.

At Musco, Takei looked back to the aftermath of the Dec. 7, 1941, bombing of Pearl Harbor, recalling how “overnight, Americans of Japanese ancestry were looked at with suspicion and fear and outright hatred simply because we look like the people that bombed Pearl Harbor, when in fact we had absolutely nothing to do with Pearl Harbor.”

He remembered when he, his parents, brother and baby sister were forced from their Los Angeles home by soldiers.

“They stopped on the front porch and with their fists they banged on the door. My father answered the door and they pointed those bayonets at all of us and told us to leave,” said Takei, who was 5.

When his mother came out of the house, “tears were streaming down her cheeks. The terror of that morning is seared into my memory,” Takei said.

Takei and his family had to live in a horse stall at Santa Anita Park, then were taken by train to a camp in Arkansas. To keep his family calm, Takei’s father told them the train ride was a long vacation to the countryside.

When they arrived, they saw barbed-wire fences and “stern-looking soldiers glaring down at us,” Takei said. “This was to be the place of our vacation in the country.”

They were eventually taken to Tule Lake in Northern California, a camp for the supposedly “disloyal” as identified through a flawed questionnaire administered by the government. Tule Lake was home to the government’s largest “relocation” camp, holding 18,000 Japanese Americans.

Internees were allowed to leave the camps after the U.S. dropped two atomic bombs on Japan, but “the government had taken everything from us. We were impoverished,” Takei said.

His family returned to Los Angeles, where his parents “worked their fingers to the bone” eventually buying and selling a dry cleaning business and a grocery store.

“And my father was one of the few people of this generation that talked to me and my brother and sister about the internment. But more than that, he told us about our democracy,” Takei said.

Takei said his father encouraged his children to become civically involved, taking him to Adlai Stevenson’s presidential campaign headquarters before his son was a registered voter. The theater of politics appealed to Takei, in addition to the democratic ideals his father believed in.

Takei became involved in student government in middle school and high school, while realizing that emotionally he was still in prison – in “a self-created closet.” He kept this to himself while pursuing an acting career, not becoming an LGBTQ+ activist until decades later.

As Takei’s career took off, Japanese Americans started being elected to political office. Those officials led a commission in 1980 to investigate the internment camps, and Takei testified at hearings. Takei and his family eventually received government reparations, which were given to Japanese Americans in the late 1980s and early 1990s.

“My father did say that it was going to take a long time. And it did take a long time. But in fact, I was very moved by Ronald Reagan’s speech [on reparations in 1988] and the fact that this happened, but there was one sad fact – that my father had passed in 1979,” Takei said. “Our father, who bore the weight and the pain and the anguish and the rage of that experience, did not survive to see that. But my mother said that he always knew this day would come. But I still wished that he had lived to see this.”

“My parents’ generation was so hurt, so pained, and they didn’t want to inflict that on their children. And so they didn’t talk about [internment] with their younger children. And so there are younger Japanese Americans who know next to nothing about this important chapter, our own personal histories, and that is worrisome,” Takai told Wilkinson College Associate Dean Stephanie Takaragawa during the Q&A that followed his talk. “And I thank you for having programs like this, and having your classes to educate people.”

In January, Takei is starring in the London engagement of the musical “Allegiance,” which is based on his family’s story. 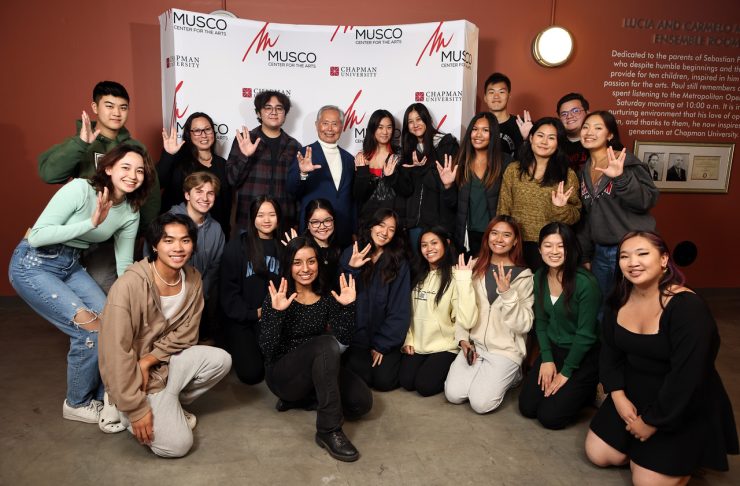 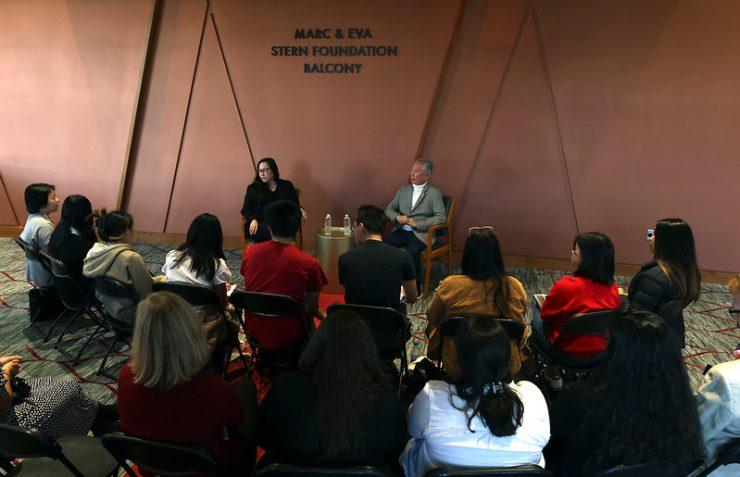 Actor, activist and author George Takei talks with a group at Musco Center for the Arts Nov. 2. (Photos by Karen Tapia/Musco Center) 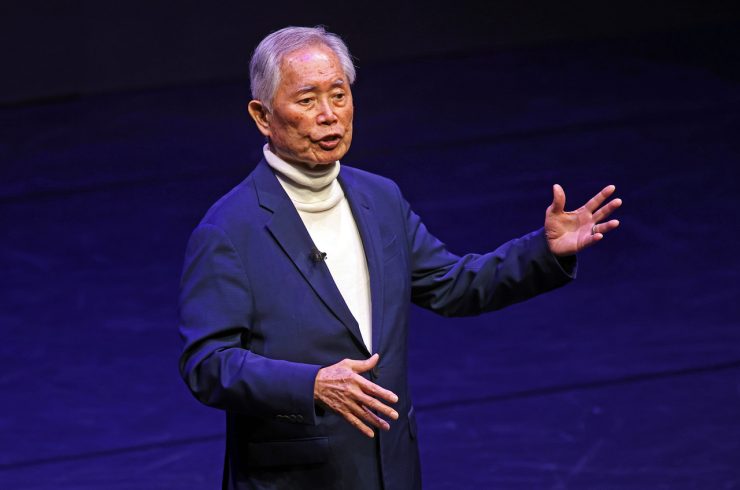 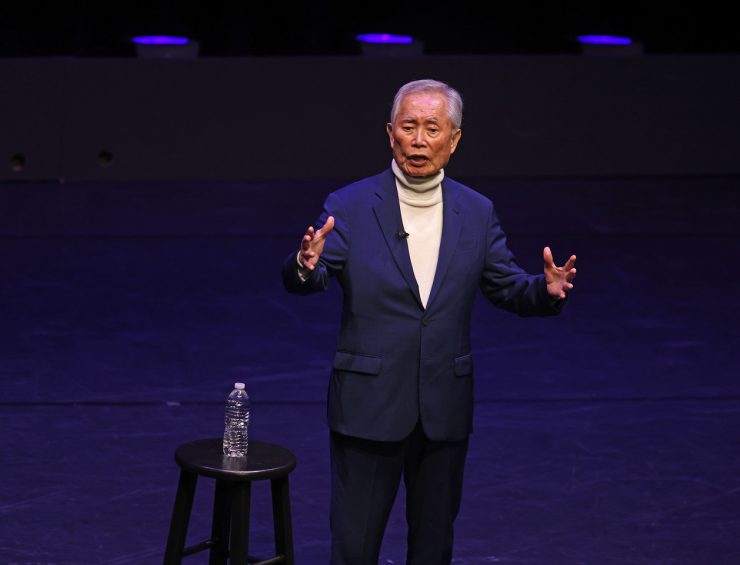 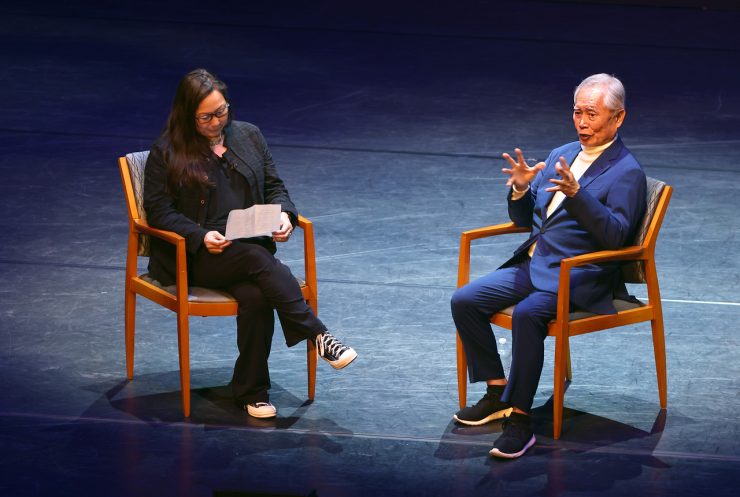