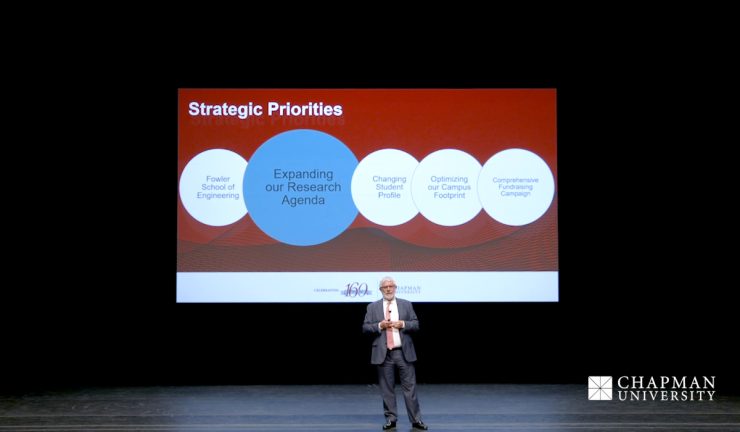 President Daniele Struppa addressed the Chapman University community via livesteam for the 2022 State of the University presentation.
University News

2022 State of the University: Looking Back and Moving Forward

“These have been complicated years,” said Chapman University President Daniele Struppa at the conclusion of his 2022 State of the University address, which was live streamed to a virtual audience on Feb. 11.  For the second year in a row, due to the ongoing pandemic, the president delivered his address to an empty auditorium while hundreds of viewers tuned in to watch. But despite the obstacles overcome, the president remained positive about the university’s accomplishments.

“It is remarkable to me that despite all of this, and despite the sense of anguish and pressure that we feel every day, we are still able to perform incredibly well,” he said.

Watch the 2022 State of the University:

The State of the University address has been an annual tradition for more than 10 years. After a brief look back at Chapman’s 160-year history, President Struppa used the opportunity to share the many successes of students, faculty and staff over the course of the past year. Of particular note, the sale of Brandman University to the University of Massachusetts resulted in a $138M addition to the university’s endowment.

“The endowment is central to our ability to provide support to our students,” said President Struppa, with over 63% of the funds from the endowment being used to fund scholarships and loans. Net assets grew at the fastest pace ever to almost $1,400M, an indication of the stability of the university and its ability to weather a crisis.

The coming academic year (2022-23) will mark the final year of the current 5-year Strategic Plan. President Struppa invited the Chapman community to participate in the development of the next strategic plan, which will operate from 2023-24 through 2027-28, by participating in upcoming town halls or by sending ideas to the administration for consideration.

A Community of Success

Throughout the address, President Struppa hailed the success of individuals from all areas of the university community. Special callouts were made acknowledging:

The president also acknowledged the 2022 Top Employers, and thanked the community for all the submissions made to the Faces of Chapman project. You can view all the honorees on the Momentum website.

Did you miss all or part of the presentation? Watch the 2022 State of the University now.