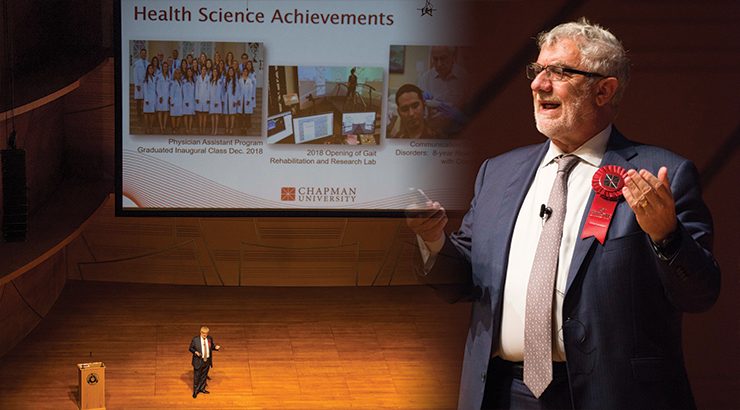 In his annual State of the University address, Chapman President Daniele Struppa reviewed ambitious projects that will shape the University’s future – from the fledgling Brain Institute, which just received $7 million in grants, to an elevated push to grow the endowment as a means to offer more scholarships and weather economic downturns.

Struppa also provided an update on initiatives coming to fruition soon, including the Villa Park Orchards student housing project set to open this fall. Thanks to an anonymous European donor, the residence center will be named The K, he said.

A theme Struppa returned to several times in his speech was the University’s responsibility to deliver on its promise to students and families. To deliver on that vision in the future, he and the trustees developed a plan to grow the endowment, now more than $390 million, to $1 billion by 2029. Among the strategies will be a comprehensive fundraising campaign.

“I want you to understand that this is not just for prestige, or to be able to proclaim that we have this large endowment. It’s the dramatic impact it will have on the people we all care so much about – our students,” Struppa said.

A more robust endowment would not only provide protection during economic dips or shifting enrollments, but would improve access and affordability through enhanced scholarships, he said.

Chapman has already made good strides in that area, he said. He announced that two new positions had been created to support programs that serve first-generation students, who now represent 20 percent of all enrollments. Guests attending the talk, held in Musco Center for the Arts, included a group of high school seniors accepted to Chapman who will be among the first in their families to attend college.

“I can promise you will love the environment here. This is a place where you will succeed and we will be working with you all along the way,” Struppa told the students, who were greeted with applause as they rose to be acknowledged.

He also described plans to transform the Rinker Health Science Campus 21 miles south in Irvine, home to Chapman University’s School of Pharmacy and several graduate health science programs in the Crean College of Health and Behavioral Sciences. With the purchase of additional property there, planners will relocate parking and create a campus environment that will include outdoor and recreational spaces, as well as pedestrian paths connecting the various laboratory and classroom buildings.

The full address may be viewed at the Facebook page for Chapman University’s Office of the President.