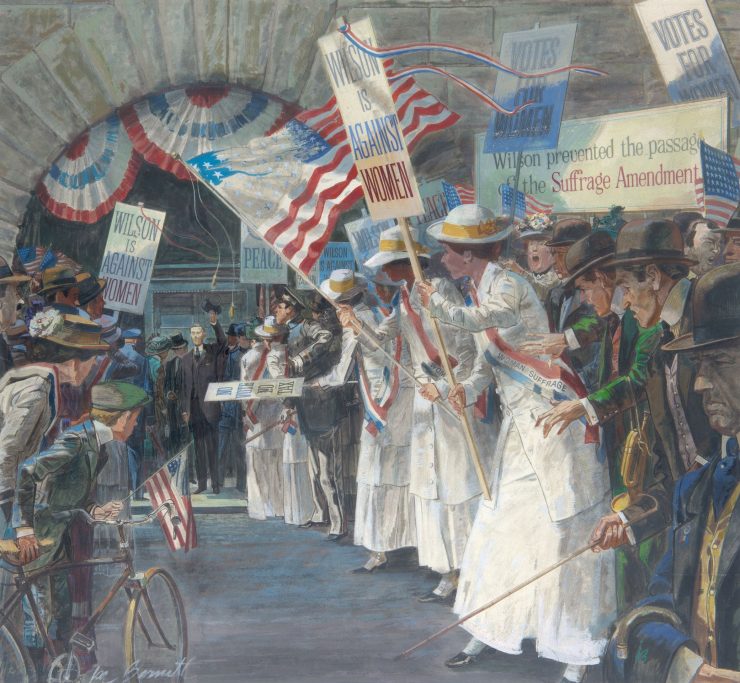 The Hilbert Museum of California Art at Chapman University will participate in the university-wide celebration of International Women’s Week with a special exhibition of the painting “Suffragettes” by Isa Barnett.  The painting will be displayed near the museum’s front desk during open hours, Tuesday, March 5, through Saturday, March 9, from 11 a.m. to 5 p.m.

The museum will also spotlight its current exhibition, “The Magic and Flair of Disney’s Mary Blair,” throughout the week, and will provide a self-guided tour sheet to the Blair exhibition, the Barnett piece, and the other works by women artists in the museum.

On Tuesday, March 5. from 11 a.m. to 5 p.m., the museum will offer free coffee and cookies to all visitors in honor of the International Women’s Week festivities.

About the “Suffragettes” Painting

Isa Barnett (1923-2001), a noted American illustrator, painted the “Suffragettes” image in the 1960s, depicting a flashpoint moment in American and feminist history. During World War I, many women in America felt strongly that the country that was so steadfastly defending democracy abroad should also practice what it preached at home, in the form of votes for women, or women’s suffrage.

Beginning in 1917, a group of determined women began to picket U.S. President Woodrow Wilson, standing outside the White House and peacefully protesting at events at which he appeared. In the Barnett painting, President Wilson can be seen in the background as the Suffragettes and their supporters shout and wave their signs. These protests went on for many months, and several Suffragettes were arrested and punished under very harsh conditions in a workhouse.

Women’s suffrage in the United States would not become a reality until 1920, after the war was won and the world was in the midst of vast societal changes. But the activists who finally won the vote stood on the shoulders of the dedicated 1917 protestors who are honored in Barnett’s painting, who bravely took their stand to get a president – and the patriarchal power he represented – to listen to them.

About the Art of Mary Blair

Mary Blair (1911-1978) was one of Walt Disney’s favorite artists, and was one of the few women to break the glass ceiling at Disney Studios in the mid-20th century. Her colorful, stylish concept art set the tone for such major 1950s animated features as “Peter Pan,” “Alice in Wonderland” and “Cinderella.” The Hilbert Museum presents its rare collection of more than 20 of Blair’s whimsical paintings for these projects and more, in an exhibition curated by the museum’s director, Mary Platt.

Blair traveled with Disney and a group of his artists on a three-month tour of South America in 1941 as U.S. cultural ambassadors – and to draw and paint all along the way. Out of this grew her mature painting and design style – bright colors against neutral backgrounds and flat, stylized forms. And her style caught the eye of Disney himself, who promoted her to lead concept artist – basically the all-important visual lead – on his most important movies of the early 1950s.

After completing work on the last of them, “Peter Pan,” she amicably left Disney and moved with her husband Lee to the East Coast, where she became a highly successful illustrator for Little Golden Books (all her books are still in print) and for notable magazine advertising campaigns, as well as designing fabrics, murals and other projects.

Mary Blair then returned to Disney in the early 1960s to design a ride for the 1964 New York World’s Fair that became “It’s a Small World.” More than 10 million people rode the popular ride during the run of the Fair, and it was reconstructed at Disneyland in Anaheim in 1966. Its popularity continued so strongly that “It’s a Small World” has now been replicated at almost every Disney park in the world.

The Hilbert Museum is open Tuesdays-Fridays, 11 am to 5 p.m.  Admission is always free. The museum is located at 167 N. Atchison St. in Orange, across from the Orange train station and Ruby’s Diner. For more information, the public can call 714-516-5880 or visit www.hilbertmuseum.org.

Angelica Allen envisions a program that captures "Blackness in all of its complexity and diversity."