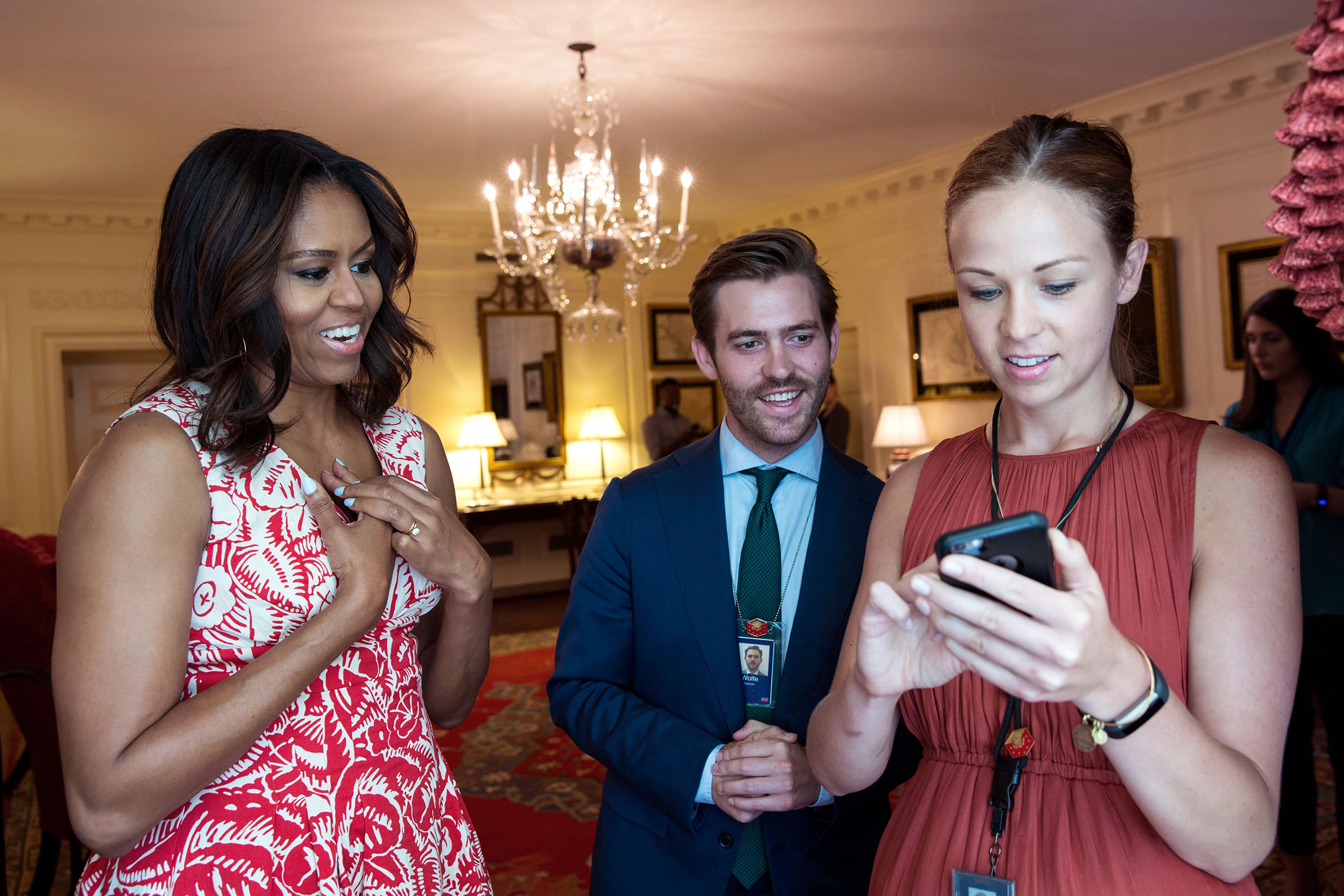 First Lady Michelle Obama holds Snapchat media time with Press Secretary Joanna Rosholm and Senior Video Producer Duncan Wolfe in the Map Room of the White House, June 21, 2016. (Official White House Photo by Amanda Lucidon) This official White House photograph is being made available only for publication by Chapman University. The photograph may not be manipulated in any way and may not be used in commercial or political materials, advertisements, emails, products, promotions that in any way suggests approval or endorsement of the President, the First Family, or the White House.
Wilkinson College

Before she was press secretary to First Lady Michelle Obama, Joanna Rosholm ’07 was a Chapman University student sitting in a political communications class. That’s where she first got the inkling that politics was for her.

It was a good hunch. Today Rosholm is part of the White House team helping Michelle Obama advance her main initiatives focusing on health, education and military families. Here the communication studies
alumna talks about her behind-the-scenes work and what comes next after her three years in the White House.

How did you get the political bug? Any Chapman experiences or professors help spark that?

I actually caught the political bug at Chapman! My political communications professor, Dr. Kevin Jones, taught an amazing class that inspired me to want to learn more, so he helped me find supplemental reading and even helped me throughout the process of applying to graduate school to further my studies.

What attracted you to behind-the-scenes political communications?

I will never forget watching a clip from the movie The American President in Dr. Jones’ class.  He told us that many former White House staff members were consulted in the making of the movie to make it as accurate as possible. I was so intrigued by that behind-the-scenes peek at the life of political communication, and I wanted to learn more.

Most of us have seen The West Wing, Veep or House of Cards. How is the reality of working in the White House different from our television impressions?

With any TV show or movie, there are a lot of similarities and some differences.  We work very long hours, we have our work phones with us wherever we go and are always on call. One difference: the White House really is usually smaller than people think, so you are constantly walking by and among very important and fascinating people. When Marine One lands on the South Lawn, it’s right outside my window – and very loud!

What was one of your first “this-is-really-the-White-House” moments on the job?

Honestly, I have them almost every day.  I’ve worked here for six years and I still have to pinch myself.  The public tours of the house happen right downstairs from my office, so I often have to weave my way through tourists to get to meetings in the West Wing.  Hearing kids squeal when they see Bo or Sunny or seeing a veteran overwhelmed by the fact that they are in the White House reminds me daily how lucky I am to be able to see it and walk through it every day. On top of it all, this First Lady is so intelligent and inspiring; I am so thrilled and grateful to be able to work for her every day.

As President Obama’s second term winds down, what are your office’s goals for the First Lady and the legacy she hopes to leave?

The First Lady is the first to say we still have a lot of work to do. Mrs. Obama has four initiatives that focus on health, domestic and global education and the military community, and we’re still working diligently to make an impact while we still have the backdrop of the White House.

But she’s not shy about having a little fun, appearing on Carpool Karaoke and mom dancing with Jimmy Fallon. How do you decide when and which such appearances are useful to her message?

If you pay close attention to all the things the First Lady has done, from Carpool Karaoke to appearing on Ellen or the Tonight Show, you’ll notice she does them all with a purpose: to talk about one of her initiatives. The First Lady said it best in a recent interview with
Variety
magazine: “I have never been afraid to be a little silly, and you can engage people that way.  My view is, first you get them to laugh, then you get them to listen. So I’m always game for a good joke.”

Was there ever an idea that she wasn’t on board with but eventually came around to and how was she convinced to change her mind?

She is involved in every idea and decision that is made, and she always has the most insightful input.  The First Lady knows that if she wants to reach a particular audience, she has to go where they are.  For example, she wanted girls and women in the U.S. to follow her on her recent trip to Liberia and Morocco.  Girls and young women are often on their phones, so we decided to do something fun and unexpected: launch her Snapchat account!

Any advice you would give Chapman students interested in a similar career path?

Follow your passion!  If something about school excites and inspires you, follow it.  Meet with as many people as you can and take as many internships as you can.

As much as you’ve been able to think ahead during this busy election season, what might be next for you?

After nearly 10 years in D.C., my next stop will likely be New York City. It has been an absolute honor to serve this President and First Lady – I know I am going to miss it. For now, I am focused on working hard to help the First Lady make an impact with the little time we have left. Then maybe I’ll put down my phone and catch some shuteye!