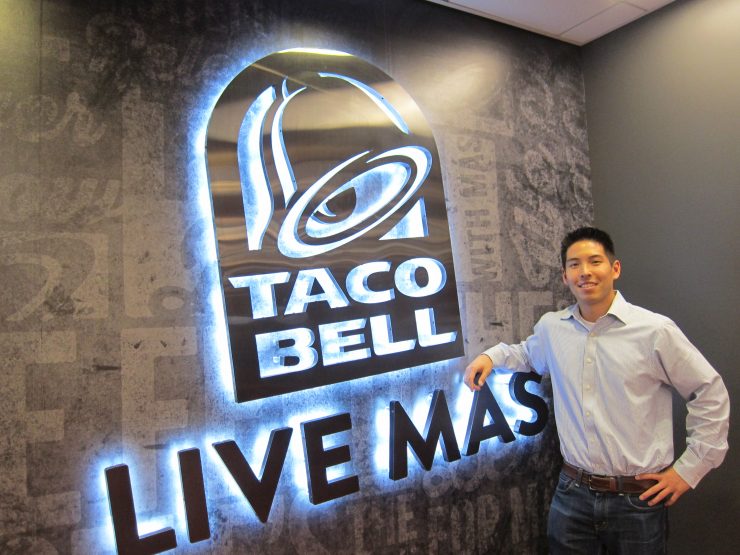 Enjoy a flavorsome visit to the birthplace of Taco Bell products.  Sample the company’s commitment  to quality and the role Brad Natsume (M.S. ’13) plays in spicing up the menu. Go to chapman.edu/podcasts.

How could you not love being a food scientist at Taco Bell?

Deep in the headquarters of the Irvine-based fast food chain, these skilled professionals conjure up menu items like the Doritos Locos Tacos and the more recent Quesalupa. They work in secret behind locked doors and crank up the music while they cook up fascinating ingredient combinations.

During a recent visit with Natsume, we tiptoed into one of the test kitchens for a rare look at the process. Sorry, no trade secrets revealed here. We promised – crossed our hearts and everything.

But these nuggets we can dish up: Creating flavorsome products and ensuring their safety is not just one of the tastiest jobs around – yes, taste testing is part of the gig. Food scientists play a key role in the multibillion-dollar fast food industry.

“Really you think of Taco Bell as a crunchy taco or a soft taco. However, it’s much more complex than that,” he says. “From the field to the manufacturer, all the way to the supply chain reaching the customer, a lot of people don’t realize the amount of work put in by both the food industry and Taco Bell.”

With an undergraduate degree in biology, Natsume turned to Chapman University for its master’s program in food science. With Chapman’s help he landed an internship at Taco Bell shortly after starting his coursework. That evolved into a job and the position he holds today.

“My experiences with the program and the faculty both were invaluable. The in-depth knowledge of the industry and being able to get a holistic view of what the industry entails were vital to my success. But I think more important were the alumni and faculty connections to the industry that really opened doors,” Natsume says.

Now he’s a vital player on all the new menu developments. But there’s no way Natsume is spilling the beans.

“You should be very pleased and surprised at what we release in the coming months,” he says.

After witnessing the whirl of creativity in those test kitchens, our taste buds are on standby.