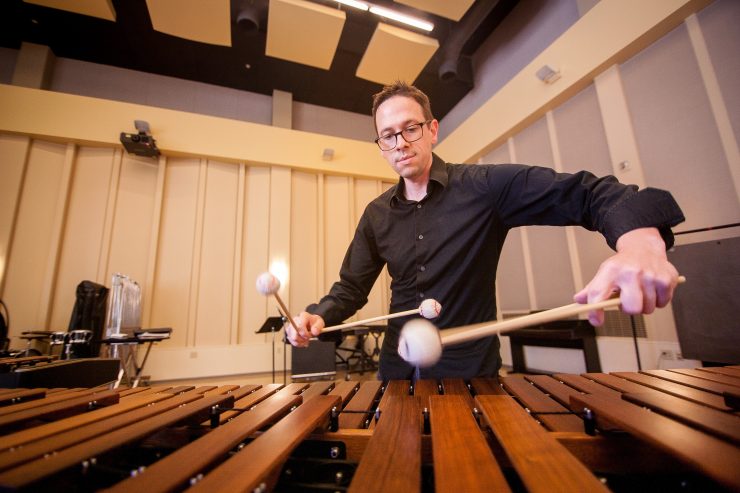 Hear a sampling of percussion instruments and the extraordinary music of Harry Partch as performed by the Grammy-winning  ensemble PARTCH. Catch the full interview with Professor Nick Terry at chapman.edu/podcasts.

View a Chapman Stories interview and watch Terry work with students in the Hall-Musco Conservatory of Music.

It isn’t every Chapman University professor who has the privilege of working in a room full of noise-making toys, from ceramic bowls and water glasses to triangles and chimes, gongs and bongos, xylophones and snare drums, and various African and South American rattlers and janglers. But that’s just what
Nicholas Terry
, Grammy Award-winning percussionist and Chapman associate professor of music, gets to do every day.Terry, DMA, specializes in contemporary classical chamber music. In 2005, he co-founded Ensemble XII, an international percussion orchestra that legendary conductor Pierre Boulez endorsed as “representing the next generation in the evolution of modern percussion.” In 2008, he founded the Grammy-nominated Los Angeles Percussion Quartet, hailed by
The New York
T
imes
for its “mesmerizing, atmospheric and supremely melodic music.”

His latest local ensemble, Brightwork Newmusic – “a very condensed version of an orchestra,” as Terry describes it – is commissioning new works and performing throughout the region. Terry is also a busy freelance musician in Southern California – “I get to perform a variety of cool and interesting jobs,” he enthuses – gigging with the Los Angeles Philharmonic, Los Angeles Master Chorale, for movie scoring sessions and more.

Speaking of his work with PARTCH and the L.A. Percussion Ensemble, Terry agrees that some audience members think all they’re going to hear is loud drumming. But, he says, more people are now embracing the groups’ often-melodic, complex and fascinating sound.

“Contemporary percussion is really on an upward trend – each year there are more groups, higher-profile concerts by great artists, and we’re just seeing a greater frequency of percussion at the forefront of the classical music world,” Terry says.

In the PARTCH ensemble, the instruments are one-of-a-kind. American composer Harry Partch (1901–1974) was interested in microtonal music – “the notes between the notes,” as Terry describes it. Conventional Western instruments don’t cover that range – 43 notes to the octave – so Partch built his own instruments, redesigning a pump organ and marimba, among others.

“As soon as you hear his music, you’re completely spun around,” Terry says. “It doesn’t sound like
anything
else; it’s like music from Mars.”

It all manifests in an amazingly energizing vibe that often draws audience members right onto the stage “to see these instruments up close, maybe play them themselves,” Terry says. “It’s not like we’re some stuffy string quartet that retires to our dressing rooms right after the concert and gets whisked off to a party. We tend to keep really engaged with the audience, in a good way.”