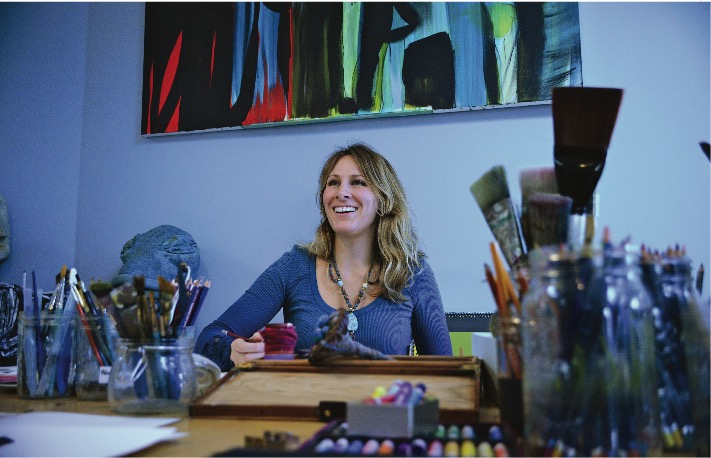 As an artist and illustrator, Cindy Derby ’08 takes precious care of her portfolio. “It’s like my child,” she says. So after she handed that child to the judges at a high-profile international showcase, she was understandably anxious when she didn’t see it among the other entries.

“I asked, ‘Did I do something wrong?’” Derby recalls. “Someone on the panel looked at my nametag and said, ‘Don’t you worry.’ Now I’m thinking, ‘What does that mean?’”

In short order, Derby learned what it meant: Her career was about to get a substantial boost. The judges announced she had won the top prize in the juried portfolio showcase of the Society of Children’s Book Writers and Illustrators.

That shining moment during a summer 2014 conference catapulted Derby from a wannabe to a working illustrator of children’s books. The most immediate benefit was a trip to New York to meet with book publishers, art directors and editors. Now she has an agent and is working on multiple projects, including one with a well-established author.

“The conference was a recognition that my dreams can happen,” Derby says.

“It was inspiring to have all these people behind my work, but it was also a motivation. I realized I have so much work to do to bring my storytelling to the next level.”

Art directors and others in the industry describe Derby’s illustrations as whimsical yet sophisticated. Her style and vision are unique, they note. Showcase reviewers singled out for praise her watercolor
Journey Home
, which shows a melancholy elephant with two long-legged birds perched on its back and a village of simple homes visible through its translucent body.

One judge shared that the work stirred deep emotions.

To hear that there’s drama in her work pleases Derby, in part because she has traversed a twisty path to a career as an illustrator. The vast majority of her formal training is in theatre, not art.

Derby developed a love for theatre growing up in the San Francisco Bay area and then had a “beautiful experience” in the College of Performing Arts at Chapman. Studying with professors such as Tamiko Washington, Michael Nehring, Thomas Bradac and John Benitz, “I learned to tell stories – to really express myself,” she says. “It was the most rewarding experience I could have had.”

Along the way, Derby also began to explore the visual arts. One day, her good friend Leah Kendrick ’08 gave her a blank canvas and encouraged her to try painting. Derby enjoyed the creative energy it sparked. Before long she had bought 20 more canvases and enrolled in a couple of art classes.

She found similarities in the evolution of a visual-art piece and a play.

“A picture book is a stage for sharing your art,” she says. “The longer I do illustration, the more I meet people from theatre backgrounds.”

But there’s another step in Derby’s own artistic evolution. After Chapman, she earned a master’s degree from the Royal Conservatoire of Scotland in Glasgow, where she developed a love of puppetry. Funding from Puppet Animation Scotland and the Jim Henson Foundation helped her develop characters and shows, including one based on her picture book
House of String.
When she performed the show at the REDCAT theatre at Disney Hall in Los Angeles,
LA Weekly
said it “brimmed with canny vision and visual poetry.”

“I saw the most visual theatre abroad, and that has really influenced my illustration,” Derby says. “I learned about myself as a creator. I feel like my work is full of all kinds of textures, which come from all kinds of influences.”

Now book illustration is Derby’s overriding passion, providing a singularity of purpose she finds she has to modulate. For a while there, she was obsessing over characters during 12- to 14-hour days at her Marin County kitchen table, which doubles as her art studio. These days she’s consciously connecting with the childlike sense of fun that was her original inspiration.

“It’s important not to impose yourself on the characters – to sketch them and see if there’s a story there, then see where the journey takes them,” Cindy Derby ’08 says.

As she works on several tracks to see her publishing dream realized, Derby clearly is enjoying her own artistic journey.

“My personal development and my development as an artist go hand in hand,” she says. “The rewards may come, and they may not. But the most important thing about the work is that I’m happy doing it.”