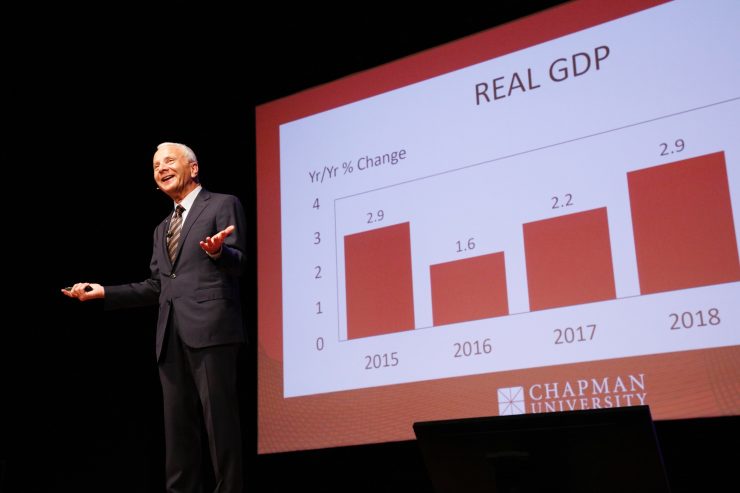 The trade war will slow the U.S. economy and hit California sharply, according to the 2019 Economic Forecast Update from the A. Gary Anderson Center for Economic Research at Chapman University.

“Our estimate is that for 2019 the impact of the tariffs, worst case scenario, will be $40 billion, which is an impact of minus .2 percent in real GDP,” said James Doti, Ph.D., lead economist on the update, presented Wednesday, June 19, at Chapman’s Musco Center for the Arts.

The midyear updates predict the nation’s GDP will grow at a rate of just 2.4 percent in 2019, a slower rate than last year. But it’s too soon to predict recession, Doti said.

“Despite the slowed growth rate, an expected 2.4 percent GDP increase by year-end will mark the longest expansion in the history of the United States. However, the slowing rate is something to watch closely,” said Doti, Chapman President Emeritus and economics professor. “It’s not possible to accurately model what will happen beyond 2019, as there are too many uncertainties. What we can do is continue to monitor certain trends that in the past have indicated the possibility of a recession – slowed growth, job losses and disruptions in the supply chain.”

In California the economic pain will be sharper, in part, because the state’s extensive port, transportation and warehousing sectors rely heavily on trade with China. This scenario reverses California’s economic trend of outpacing the rest of the nation. Additionally, construction and technology are also slowing, Doti said. 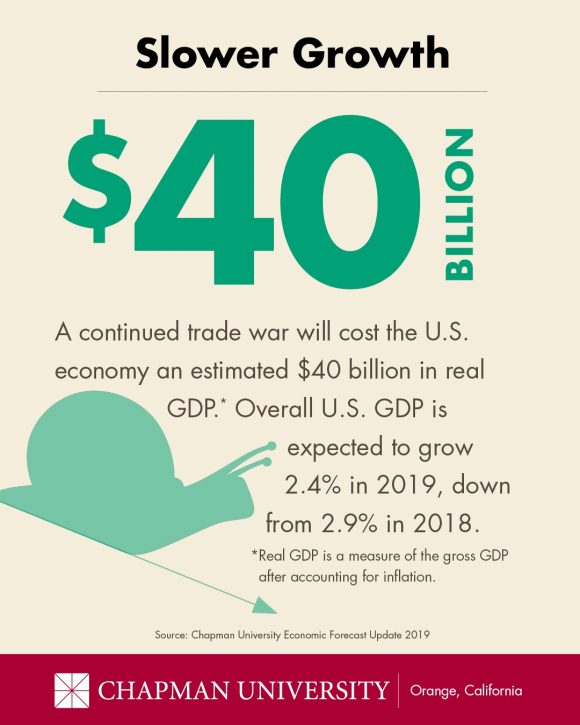 More About Trade with China

The growing prospect of a trade war with China is already having an effect. Imports from China fell at double-digit rates in the first quarter of this year, a trend likely to continue. Lack of a new trade agreement will have a strong negative impact on the critical transportation and warehousing sector, resulting in an estimated loss of 40,000 jobs in California by the end of 2019, with further decline expected into 2020 and beyond.

“A trade war impacts the California economy more profoundly than the rest of the nation as the majority of goods, approximately 90 percent, pass through the state’s airports and harbors,” Doti said. “Nationally, a trade deficit traditionally leads to a rise in GDP, however, the global supply and demand chain is more interdependent than ever and the deficit will have a negative impact on domestic production. If we can’t produce domestically, we can expect to see a further decrease in jobs.” 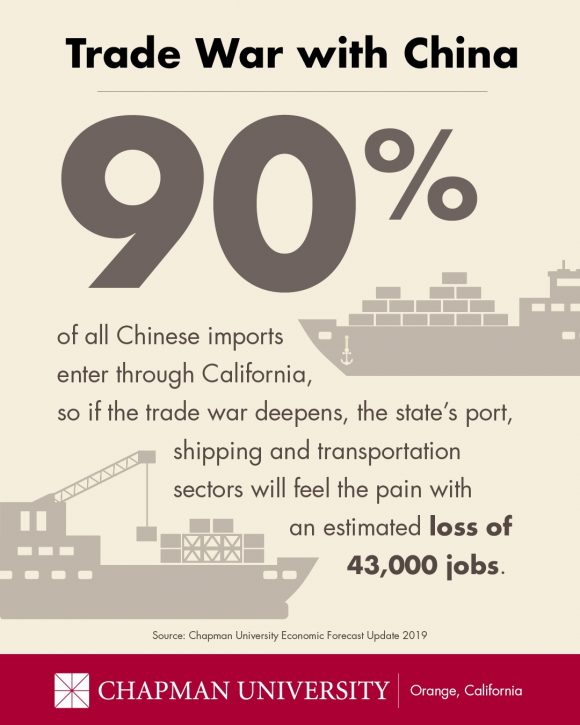 What about Jobs and Employment?

The Chapman University econometric model predicts California’s overall employment growth will decline from 2 percent in 2018 to 1.5 percent by the end of 2019. This prediction spurs from sharp drops seen across key industries from 2018 to 2019:

While trade tensions are the cause of deterioration in the transportation and warehousing industry, the information services sector has slowed because California has not been able to foster the right environment for specialized tech jobs to flourish, according to the report. Viable talent is moving to burgeoning technology hubs in states with more manageable costs of living and lower tax rates. The sector saw double digit growth from 2016-2018 but stalled in 2019, resting close to zero outside of Silicon Valley.

“Information services is the most important job sector for California’s future,” Doti said. “These jobs support the growing technology industry and on average offer higher wages than other industries. The lack of jobs is leading to a net population loss for the state.”

Job loss in the construction industry began in late 2018 and continues. Mortgage rates have since fallen from 5 to 4.2 percent which will slow the drastic decline, however positive year-to-year growth will not resume until the second half of the year. As a result, the construction sector will be neutral come the end of 2019 having sold and produced a similar amount of housing as units sold in 2018. 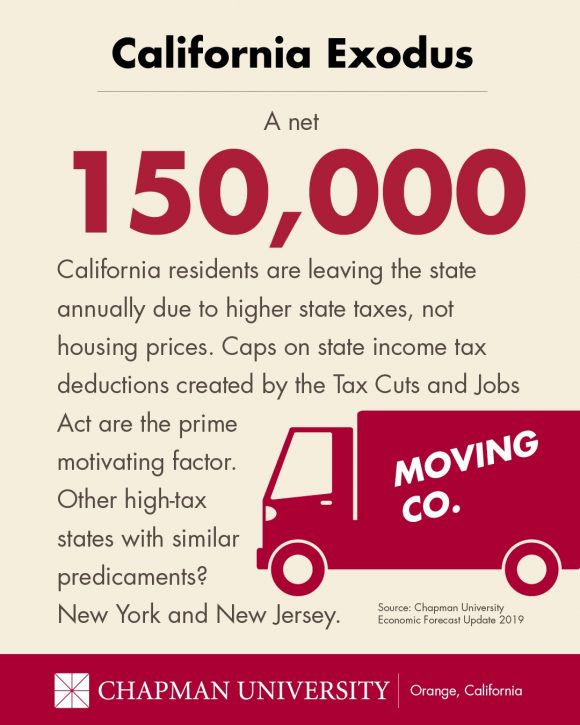 A migration of 150,000 residents out of the state adds additional challenges to California’s economy. It’s not California’s housing prices, as some have speculated, but high state taxes made even more burdensome by tax reform, according to the analyses conducted by Doti and the Anderson Center forecast team.

“We’ve seen more people leaving than moving into California over the last several years,” Doti said. “People are leaving California because of high income and sales taxes and moving to states like Texas, Florida or Washington where there is no income tax.”

Over its 41-year history, the Chapman University Economic and Business Review has been recognized for its accuracy, correctly predicting economic outcomes more consistently than the Blue Chip Economic Indicators Survey. This midyear update takes into account economic information now available, especially for 2018, and economic trends that emerged during the first half of 2019.

The 42nd Economic Forecast Conference takes place in December at the Segerstrom Center for the Arts.