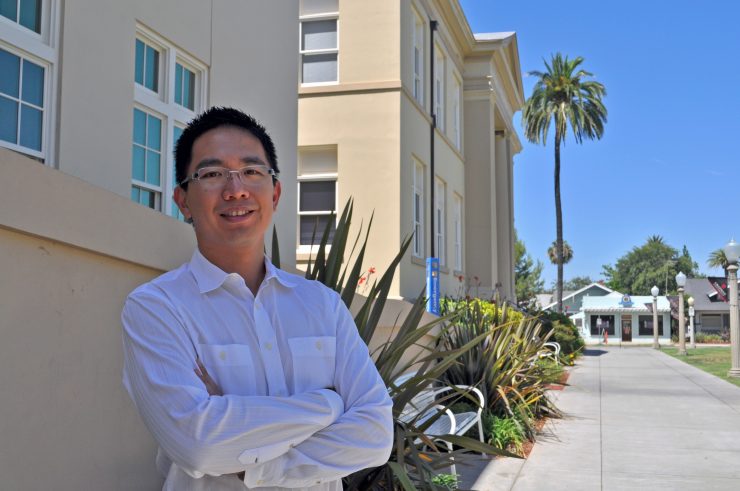 An assistant professor of communication studies and a 2017 Valerie Scudder Award honoree, Yuhua (Jake) Liang, Ph.D., passed away Aug. 11. He was 37.

“The grace and strength with which Jake dealt with his cancer was an inspiration to all as he consistently thought of how it impacted others every step of his journey,” said Provost Glenn Pfeiffer, Ph.D. “Jake specifically wanted the Chapman community to know how much he appreciated the support and love everyone showed him each and every day during this very difficult past year.”

Liang arrived at Chapman in 2013 and taught in what is now the School of Communication, with an emphasis in strategic and corporate communication. His varied and lively research interests included online reviews and human-robot interaction, assisted by his faithful research robot “Casey.” Liang extended his studies of online product reviews to the site RateMyProfessors.com, concluding that a tactful response from a professor after a negative online review improved learning outcomes for students who read the review.

“One possibility is that after reading negative reviews, students simply gave up on the idea of having a competent and caring instructor,” Liang said of his research.

Presented with a professor’s reply, students were able to decide for themselves how much weight to give the original review.

Liang published more than 20 peer-reviewed journal articles and had additional manuscripts under review and in progress. His other research interests included persuasion and decision-making, information diffusion, organ donation and environmental and water issues.

In addition to the Scudder Award, which is conferred by faculty peers in recognition of outstanding achievement in teaching, scholarly/creative activity, and service to the University, Liang previously received Chapman’s Faculty Research Excellence and Innovations in Sustainability Education awards. He also earned top paper awards from the National Communication Association and the International Communication Association.

He is survived by his two sons, Julian, 11, and Neo, 6; his parents, Annie and Ning Liang; brother, Ray Liang, and his beloved dog, Café.