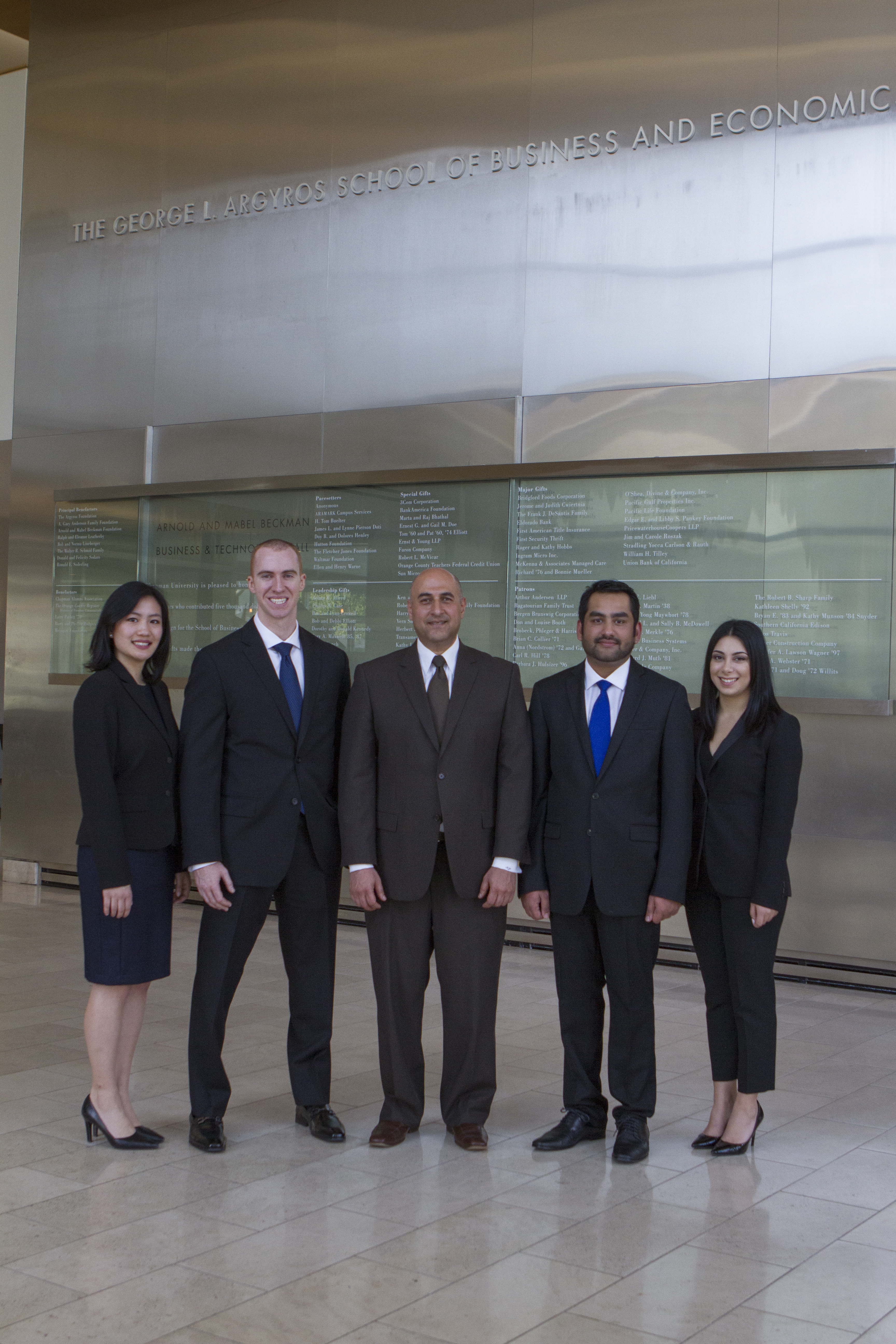 Chapman University’s Janes Financial Center Residents have won the local round of the CFA Institute Research Challenge. The competition was organized by CFA Society Orange County, and hosted at Chapman’s main campus on March 10. This inaugural victory on their home turf advanced the four-member team to the America’s Regional round in Seattle, Wash., which was held on April 6-7.

The CFA Institute Research Challenge is an annual global competition, where each university student team analyzes a publicly traded company with a buy, sell or hold recommendation. This involves writing a detailed report and presenting research to a panel of judges composed of leading Investment professionals in the industry, who evaluate the quality of the report, the soundness of the research and the delivery of the presentation. Chapman’s team members, Aayush Aggarwal (MBA ’18), Dominique Yadegar ‘18, Valerie Chang ‘17 and Orion Lawler (MBA ’17), were assigned Opus Bank as their subject company.

“The most challenging aspect was finding a way to effectively frame and present our subject company as a buy to our audience, given that there were a few seemingly red flags linked with the recommendation,” said Yadegar.

After being crowned the local champions, the Residents represented both Chapman and the CFA Society Orange County in the America’s Regional, where they competed for a chance to be one of two teams to advance to the Global Final in Prague, Czech Republic. With over 53 teams from across CFA Societies in the Americas participating, Team Member Lawler described the experience as “exciting but also very nerve-racking.”

“We joked about having four adrenaline rushes in one day, one for each round of the competition as well as for each announcement of the winners,” teammate Chang added.

In the America’s semifinal round, Chapman competed directly against USC, UCSD, College of William and Mary and Kennesaw State University, beating all four universities. Advancing to the final round, Chapman’s Team delivered their presentation in front of thousands of viewers as they competed against the University of Waterloo, Insper Instituto from Brazil, the University of Denver and Seton Hall University. The title of America’s Regional champions was given to Seton Hall and Barna Business School.

Although the Residents will not go to the CFA Global Championships, their achievements are notable nonetheless. They are the first team to represent Chapman in the America’s Round and by making it to the finals, they are the only CFA Society Orange County team to reach the America’s finals in the Research Challenge in a number of years.

“Reaching the finals would probably be one of the best achievements for me,” said Aggarwal. “I will always be grateful to Chapman for giving me the opportunity to participate in an event of such a magnitude.”

Fadel Lawandy, director of the Janes Financial Center from Chapman University’s Argyros School and the team’s faculty advisor, created the Residency Program in 2013 to leverage the technology in the Janes Financial Center, and give students practical experience to help bridge the gap between the classroom and a career in the finance industry. The success of the program is hard to ignore, and the Research Challenge adds another impressive accolade to their long list of accomplishments.

“I am very proud of every single one of our students that participated in the competition. Their dedication, hard work, and endless hours they invested in preparing for this competition paid off. Reaching the finals at the CFA Research Challenge Americas on their first time is a great accomplishment,” said Lawandy. “Next year, we intend to make it to the CFA Research Challenge Global!”