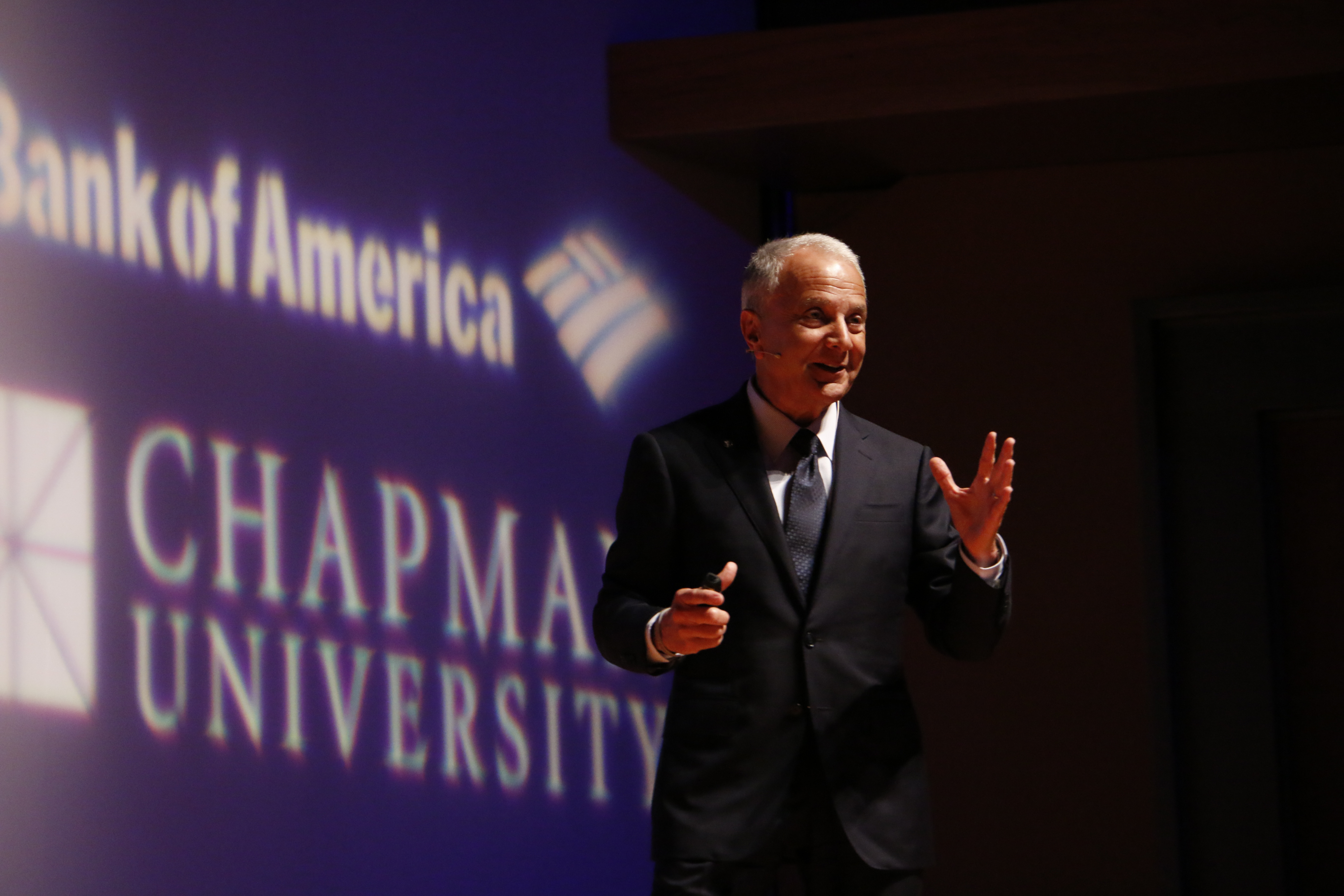 A softening economy characterized by a loss of high-paying jobs darkened the economic picture painted at the 2016 Economic Forecast Update presented by the A. Gary Anderson Center for Economic Research at Chapman University on Tuesday, June 28.

President Jim Doti said jobs in Orange County would likely grow by just 2.5 percent during 2016, most in low-paying industries. The so-called “California Miracle” has largely been driven by the Silicon Valley, Doti said.

“Orange County has under-performed,” he said.

Doti also took a few minutes to comment on Brexit, which occurred too recently for commentary to be included in the published report. Contrary to other economists, as well as media and political pundits, Doti said he considered the UK decision to leave the European Union to be an overdue wake up call.

“The European Union has been a failure. It’s been one bureaucratic, regulatory mess sponsoring crony capitalism,” he said.

Moreover, Great Britain was at best a marginal member of the European Union and the predictions of a devastated stock market are overblown, he said. When people understand that Brexit “is a good thing and not a bad thing, markets will stabilize again,” he said.

Presented for the first time in Marybelle and Sebastian P. Musco Center for the Arts, the forecast update was also a tribute to the late Esmael Adibi, Ph.D., who was the director of the A. Gary Anderson Center. The update was dedicated to Adibi’s memory, and several tribute videos were included in the presentation. Doti and Adibi created the economic research model that has been used to prepare the forecasts since 1979.

Doti shared with the audience the words printed on a wristband he wore that was created by Adibi’s MBA students in honor of their late professor – “Greatness never departs.”

“When it comes to Essie, that is so true,” Doti said.

Following is a summary of the forecast:

As we assess the U.S. economy, there are more signs of weakness than pockets of strength. These emerging signs suggest the seven-year recovery is weakening, especially since late last year.  The following categories, for example, are experiencing slower growth:

Some categories are showing outright declines:

Although it is too early to call for a recession, it now appears that the current recovery is in its latter stages and nearing an end point.  Before that point is reached, underlying growth in the U.S., as measured by real GDP, is likely to move from a two-to-three percent range to a one-to- two percent range.

On the surface, California’s economy appears to be growing more rapidly than the U.S..  For example, from 2007 to 2015, California experienced faster growth in the following categories:

The “California Miracle” is also reflected in the state’s general fund revenues, which have increased 40 percent since the recession.

Looking beneath the surface, however, reveals a number of deep-seated structural problems in the state.

The fact that the national and local economic variables that comprise the California job indicator are signaling a downturn in job growth does not necessarily indicate an imminent recession. But it does strongly suggest that the state is entering the final stages of recovery.

Since 2007, cumulative job growth of 2.8 percent in Orange County has lagged the U.S. (3.3 percent) and California (4.9 percent).  Even more alarming is that most of these jobs are being generated in low-paying categories like education & health and leisure & hospitality.  The

county is losing high-paying manufacturing jobs and not generating high-value-added jobs in the service sector.  While the Silicon Valley is a job machine in generating information-related jobs, Orange County is losing them.  As a result, Orange County’s per capita personal income, which in 2007 was 16.4 percent greater than that of California, is now only 8.7 percent higher.

Like Los Angeles, more people are leaving Orange County for other parts of the U.S. than those from the U.S. moving to the county.  Although the number of people leaving each year is relatively low, the rate of outflow has doubled in the last two years.

As in the case of California, current trends

suggest that the county’s recovery is no longer holding its own but is in decline, with all explanatory factors pointing to slower growth.

ABOUT THE ANDERSON CENTER FOR ECONOMIC RESEARCH

The A. Gary Anderson Center for Economic Research (ACER) was established in 1979 to provide data, facilities and support in order to encourage the faculty and students at Chapman University to engage in economic and business research of high quality, and to disseminate the results of this research to the community.