UPDATE: The location for Professor Adibi’s 11 a.m. Saturday, April 16, memorial service will now be at the Musco Center for the Arts.


Chapman University mourns the passing of Esmael Adibi, Ph.D., professor of economics, holder of the A. Gary Anderson Chair in Economic Analysis and director of the University’s A. Gary Anderson Center for Economic Research.   Dr. Adibi died of complications from a stroke on Friday, April 8, 2016.  He was 63. 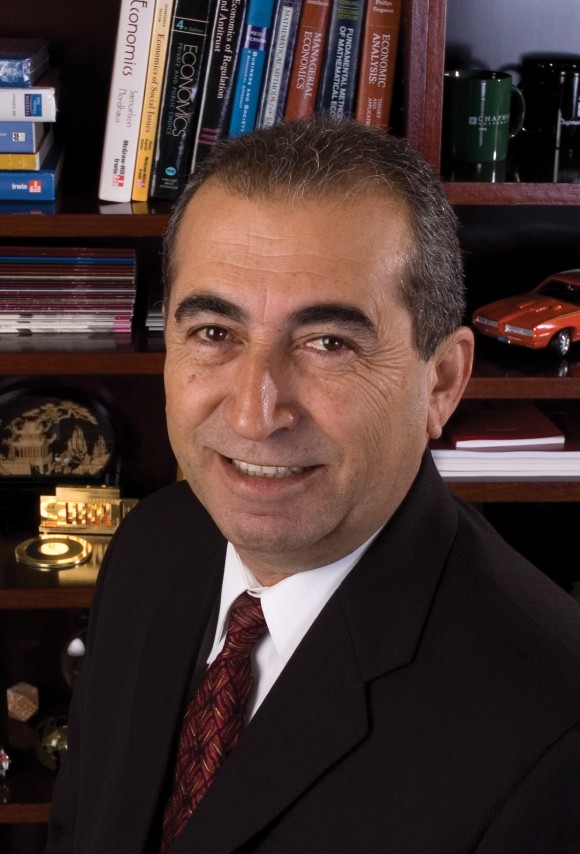 “I’ve lost my closest friend and Chapman has lost one of its brightest stars,” said Chapman President Jim Doti.  “It’s really difficult for me to imagine our university and our community without him.”

Dr. Adibi was perhaps best known to the Southern California public as the genial and intellectual presenter of the Chapman University Economic Forecasts, which he delivered live on a succession of the largest stages in Orange County (currently they are presented at Segerstrom Center for the Arts) over the past 38 years along with fellow economist Doti.  The forecasts, which because of their accuracy grew to be widely trusted by California business people and media outlets throughout the nation, began as a class project at Chapman in 1977, when Adibi was still an MBA student.  Adibi joined the Chapman economics faculty the following year – the first year the Economic Forecast was released publicly.

Adibi was especially proud of the involvement students have in researching data for the Forecast. “We’re really here to give students opportunities to use what they’ve learned in the classroom and see the results of their work,” he said recently. “It’s exciting for them to see their work published and attend the Forecast events, which draw some 2,000 attendees.”

Dr. Adibi was beloved by his students because of his scholarly acumen, his genius for explaining the thorniest of economic subject to students and the public alike, and his obvious passion for the field of economics.  “Essie Adibi had an amazing intellect and an unparalleled ability to describe the most complex economic concepts in a way that everyone could understand,” said Reginald Gilyard, dean of Chapman’s George L. Argyros School of Business and Economics.  “He was also an important advisor to me as I transitioned from the private sector to the world of academia. Up until his final days in the office I was learning from Essie. Most importantly, he was a close friend, and he will be missed by so many people.”

Dr. Adibi joined the Chapman faculty in 1978 and was appointed director of the A. Gary Anderson Center for Economic Research in 1985.  His research interests focused on analyzing key economic indicators for the U.S. and California, and he was widely quoted in and interviewed by the media on issues of economics.

He was past president of the Association for University Business and Economic Research, and a member of the NABE Outlook Survey Panel and Western Blue Chip Economic Forecast Panel.  He served on the board of directors of SchoolsFirst Federal Credit Union and was a member of the California Treasurer’s Council of Economic Advisors.

With Doti he co-authored
Econometric Analysis: An Applications Approach
, as well as authoring
The Practice of Econometrics with EViews
.  His articles were published in many newspapers, including the
Los Angeles Times
and the
Orange County Register
, as well as in professional journals such as
International Advances in Economic Research
, the Journal of Private Enterprise and the
Quarterly Journal of Business and Economics
.  He also contributed frequently to local and national news stories on the economy.

A memorial service for Dr. Adibi will held on Saturday, April 16  at 11 a.m. in the Musco Center for the Arts.