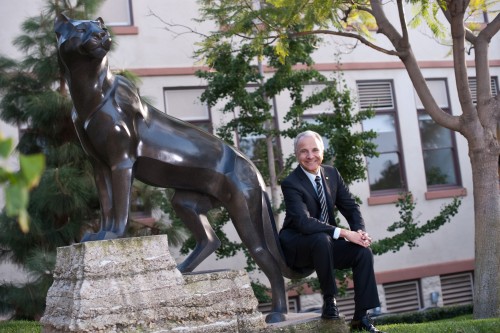 Midway through his final year as the longest-serving leader of Chapman University, President Jim Doti has received some significant plaudits from Orange County media.  He was named 2015 Business Person of the Year in
a cover story by the Orange County Business Journal
.  In the January 4-10 issue, reporter Paul Hughes notes that Doti “has remade a small liberal arts college into a focused university with a much more substantial profile in Orange County, Southern California and the nation.”

The story cites such Chapman benchmarks over the past 25 years as the growth in number of students from 1,900 in 1991, when Doti took office, to nearly 8,000 today; a 1,876% growth in freshman applications; a 20% increase in SAT scores of entering freshmen; an increase in full-time faculty members from 105 to 418; and a tenfold increase in Chapman’s endowment, which stands at $301 million today.  “Chapman in 1991 ranked no higher than No. 49 in three U.S. News and World Report categories: Western regional schools, academic reputation and student selectivity,” Hughes wrote.  “It’s now in the Top Ten of each.”

In December, Doti was also honored as one of the
Orange County Register’s Most Influential People
.  Higher education reporter Roxana Kopetman noted that “under Doti’s leadership, Chapman has expanded both physically and by reputation. His fundraising helped the private university build six new colleges, including the Dodge College of Film and Media Arts and the county’s first School of Pharmacy. This year, Doti oversaw the accelerated construction for the Hilbert Museum of California Art, which will open in February, and the Musco Center for the Arts, which will open in March with a performance by opera superstar Plácido Domingo. He also oversaw plans, which this year kicked into high gear, for a new Center for Science and Technology.”

Doti was also interviewed on PBS SoCal’s “Inside OC” by Rick Reiff, in an episode that aired in December and early January.  He answers some hard-hitting questions about the current higher education environment, as well as his philosophy of leadership at Chapman, his many other interests, and his upcoming retirement from the presidency and return to the faculty.  You can watch the episode in its entirety (it’s about 27 minutes long) below