No matter how far afield his scholarship and research take him, Chapman University physicist Ali Nayeri still finds his attention getting pulled back into the vortex of an early fascination with black holes. 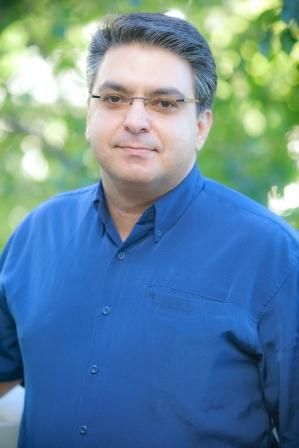 “When I was a teenager, I was mesmerized by the concept of black holes — particularly their most amazing feature, that light cannot escape,” said Nayeri, Ph.D., assistant professor in the
Schmid College of Science and Technology
as well as a member of the University’s
Institute for Quantum Studies
.

So when Nayeri thinks of light, his mind toggles to where none is revealed. He embraces that revelation, but he also reminds us that visible light is really just a tiny window in the electromagnetic spectrum. “For physicists, essentially there’s no difference between visible light and, for instance, gamma rays or radio waves,” he says. “The only difference is the sensitivity of our eyes to this particular wavelength.”

Then again, slivers of light on a spectrum can’t hold a candle to considerations of super massive black holes, some of which have enough gravitational pull to hold galaxies together.

“In a way, we can say that these black holes are the engine of the galaxy,” he says. “Without them, you couldn’t hold all these stars in a complex system.”

The life span of black holes depends on their mass, and in the end they transform into pure radiation. Despite their existence in utter darkness, much is now known about black holes, but mysteries remain. For instance, physicists still have many questions about how black holes meld with the quantum world.

“One of the champions is Stephen Hawking,” Nayeri says of the renowned British physicist. “In the ’70s, he was able to combine classic gravity with quantum physics. Partially anyway.”

It was Hawking who posited that black holes emit radiation because of quantum immense forces at work in the cosmos. “In our lifetimes, we probably won’t discover any Hawking Radiation coming from the sky,” Nayeri says, perhaps a bit wistfully.

The night sky first beamed inspiration to Nayeri when he was a child growing up in Shiraz, Iran. His father was a pilot in the Iranian Air Force, so it seemed natural to look up and start identifying the constellations. Nayeri has found creative stimulation there ever since.

These days when he scans the heavens it’s often with an eye toward sophisticated discovery and the search for echoes effects.

“We haven’t been able to observe these Hawking Radiations,” Nayeri notes, adding that the best testing of Hawking’s prediction has come from creating mini black holes with the CERN European research center’s Large Hadron Collider. This particle accelerator produces light so intense as to illuminate an atomic world that’s otherwise inaccessible, but it still pales next to the about the very origins of the universe. However, his mind’s eye can’t help but flash to his elemental fascination with the ultimate dark place.

As he immerses himself in the celestial void that is a black hole, he smiles. For Nayeri, the gravitational attraction of dying stars remains as powerful as ever.