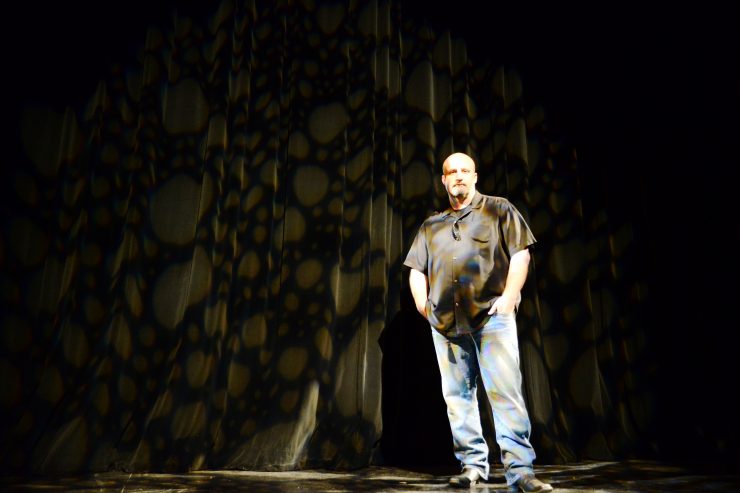 Don Guy knows light the way Freud knew phobias, the way Streep knows accents. Like a scientist, he understands the physical properties of light and can accentuate its intensity. Like an artist, he gives it shape and color, makes it dance and tell a story.

In his hands, it’s as if light can perform magic.

Prestidigitation, meet the master of illumination. Building on a career as an in-demand lighting designer for theatrical productions and arena concerts, this assistant professor in Chapman’s College of Performing Arts has become the go-to Guy for producers of high-profile magic shows.

In March, Guy designed the lighting and directed
Masters of Illusion Live
– Believe the Impossible!
The show enjoyed a sold-out run at the Palacio De Los Desportes in the Dominican Republic before touring the world during summer. Closer to home, he lighted shows for Magic Weekends at the Mission Bay award-winning magicians Kalin and Jinger.

Then there’s the lighting he designed for the Illusionarium theatre in the Norwegian Cruise Line’s ship
Norwegian Getaway
, which highlights his all-out commitment to his craft.

Guy invested two years of planning and consulting with everyone from the shipbuilders and architects to the show’s illusionists. Then he spent nine weeks in Germany melding his design with the room’s aesthetics, poring over spreadsheets, adjusting lighting boosters and attending to dozens of other details. At one time or another, he sat in each of the theatre’s 275 seats.

“There were four full days of me in a room by myself,”

The result is a show that brings audiences to their feet. Of course, part of that could be because the seats shake and tables rise at various times during the performance. It seems everyone was all-in on this theatre design.

With magic, sometimes the lighting distracts, so Guy diverts light into the audience’s eyes. Other times he trains it to shine on every side of an illusion.

“Magic keeps me sharp,” he says.

It also keeps him coming back for more. When his Chapman students ask which is his favorite project, he’s always ready with an answer: The next one.