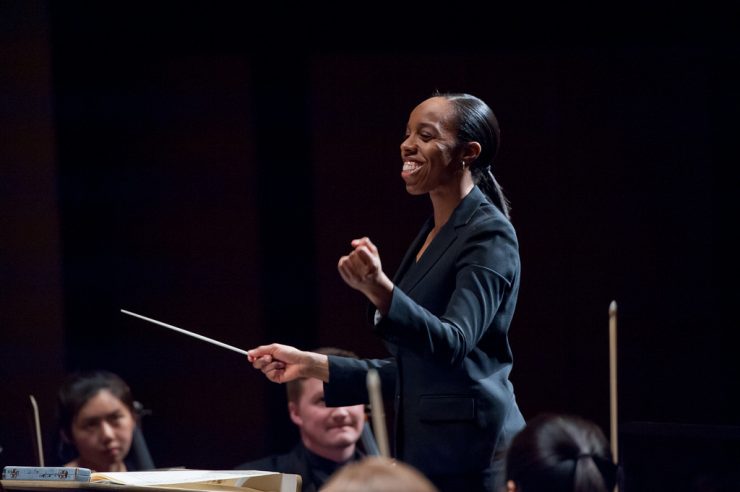 Kalena Bovell ’09 is settling into her new role as director of orchestral studies at the Loomis Chaffee School In Hartford, Conn. She has her hands full with teaching music, tutoring and, when time permits, playing the violin. The bustle of each day is the percussion and melody of her life, making what comes next something of a solo.

This summer Bovell was selected to receive a prestigious one-year conducting fellowship with the Chicago Sinfonietta orchestra. Called Project Inclusion, the fellowship is designed to help break down institutional biases about ethnicity, race, gender and socio-economic status, opening doors to all musicians. Bovell first started in the fellowship this fall, when she began studying under the leadership of the Sinfonietta’s female music director, Mei-Ann Chen.

The Chicago Sinfonietta, founded in 1987 by Maestro Paul Freeman, was built around the idea that America’s orchestras should reflect its communities.

“Project Inclusion — that’s a huge thing…reaching out to people who wouldn’t normally get to participate,” Bovell says.

As a mostly self-taught musician, Bovell went into her college auditions thinking she was “pretty awesome at this violin thing,” she says. While sitting in the hall for her Chapman audition appointment, she could hear other students playing and suddenly began to feel slightly self-conscious.

Chapman helped her escape her self-described violin bubble as it also provided her first experiences with conducting. Learning from Maestro Daniel Alfred Wachs, director of orchestral activities at Chapman, she felt the pull of the podium.

“I really like (conducting). There’s something fun, and it’s easy in the way that it feels natural to me,” Bovell says.

Sinfonietta Executive Director Jim Hirsch says Bovell was chosen as one of two fellowship recipients from a pool of more than 60 applicants not just because of her inherent skill but because of her spark.

When she conducts, Bovell exudes a quiet confidence. She can be quite expressive, but there’s never a movement that’s frenzied or dramatic. She seems at home in the role of orchestra leader.

“You can’t be afraid to be who you are on the podium,” she says.

During Bovell’s year with the Sinfonietta, she will learn not just about conducting but the management and publicity tasks of the job — the behind-the-scenes work that keeps the professional orchestra machine in motion.

On top of being a published poet, a fellowship recipient and landing a teaching job right out of graduate school, Bovell is a semifinalist in The American Prize competition, which recognizes outstanding work in musical performance.

But ask her how people identify her as a classical musician, and she says matter-of-factly that it’s first by race, then by gender, and after that by talent.

“Something my dad taught me very early on is that the first thing people are going to see is my skin color,” Bovell says.

Growing up, she faced stereotypes that leeched into her music: People would automatically assume she was a jazz musician, and classical violin was usually not their second guess. Dealing with other people’s preconceptions can get old, she says. She remembers being made to feel she wasn’t good enough because she hadn’t had private lessons.

“You do have to work three times as hard as a minority in classical,” Bovell says.

All of these experiences have built the trajectory of her career. But even though she has added her name to the roster of women with conducting degrees, the battle still goes uphill. League of American Orchestras (LAO) statistics show that the conducting world remains predominantly male and white. Among the findings from the group’s latest survey:

The numbers on racial and ethnic diversity are also lopsided. Among general symphony orchestra members nationally, 7 percent are Latino and 2 percent African American.

On the gender side, Wachs does see some progress, pointing to the 2007 appointment of Marin Alsop as music director of the Baltimore Symphony as a watershed moment.

“Thankfully, largely due to the social changes of the 1960s, this misogynistic attitude began to shift, albeit slowly,” Wachs says. “Chapman’s undergraduate conducting program, one of only two in the nation, has a long and proud history of inclusion and diversity.” Maestra Kate Tamarkin ’78 continues to enjoy a successful career as the music director of the Charlottesville Symphony in Virginia, Wachs notes. And a current Chapman conducting student, Alexandra Jones ’18, carries on this tradition, he adds.

For her part, Bovell counts herself proud to be part of a project that’s “working to close that diversity gap.”

“I want to be an example for others — I can do this, so you can too,” she says. “That representation does exist.”