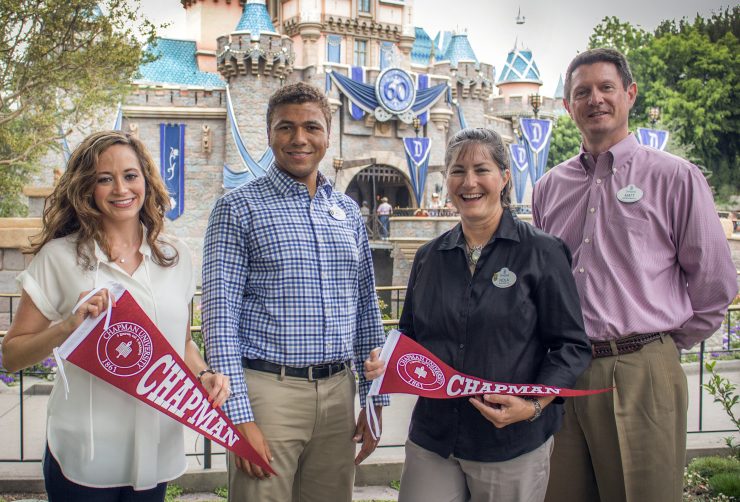 Will Kellogg ’14 did not choose to attend Chapman University just so he could launch his career five miles down the road at Disneyland. But it didn’t take long for the connection to click. By Kellogg’s sophomore year at Chapman, the music performance major had decided that the world-famous theme park was where he wanted to put his skills to work. Now he’s a full-time guest talent coordinator, working closely with visiting arts groups that perform in the park.

“I’m living the dream,” he says. “I’m working with some of the smartest and most creative people on the planet.”

It’s a dream and tradition shared by many Chapman alumni, who through the years have found “The Happiest Place on Earth” to also be one of the world’s best employers. As Disneyland marks its 60th anniversary this year, it counts numerous Chapman graduates among its top management, from human resources to government relations.

Lest you think the fun disappears once a paycheck is involved, don’t worry. The same kind of energy that goes into making visitors happy also fuels a dynamic work setting, alumni say.

“I love knowing that I get to go to work every day and be with my friends and be challenged together and grow together. It makes the environment and culture just incredible,” says Jessica Torrico ’09.

A history major, Torrico started as a part-time employee and served in a variety of roles. Now she is a public affairs representative, helping coordinate logistics for special events in the park. Recently she was also selected to participate in Emerging Leaders, a Disney management training program.

Indeed, Disneyland is not the land of dead-end careers, says Matt Gray (MBA ’12). Gray began there as a skipper on the Jungle Cruise, the gentle water ride famous for dousing guests with cornball jokes. Today he is general manager of merchandise for Disneyland, managing the business of everything from all those mouse ear hats to every souvenir T-shirt.

“There are extraordinary opportunities here at Disneyland,” he says.

For Gray the opportunities expanded after he completed the executive MBA program at the Argyros School of Business and Economics. The graduate program helped him take his practical experience logged at Disneyland and apply it at a deeper level.

That brand of creative spirit is what endears Disneyland to Nola Jackson ’88, a stage technician in Disney California Adventure. Jackson went to work at Disneyland after graduating with a communications degree with an emphasis in theatre, a course of study now part of the production management program in the College of Performing Arts. Most recently Jackson has staged the popular World of Color water show and manages the Hyperion Theatre in Disney California Adventure, home of the Broadway-style show Aladdin — A Musical Spectacular.

“We know that our technology and how things are presented on the stage has a wow factor,” Jackson says. “That’s why I got into this industry.”

Even to relatively new hires like Kellogg, opportunities to connect with creative people present themselves daily. Among his responsibilities is stage-managing guest performers, from high school marching bands to youth ballet folklorico groups. At the end of their performances, he reminds them that as community performers they are a beloved park tradition, one that Walt Disney himself envisioned for Disneyland.

“I tell them that this Guest Talent Programs department wouldn’t exist if Walt Disney didn’t believe that the talent of the future isn’t in the future, it’s happening now,” he says.

Their eyes widen every time. Kellogg loves those moments.

“That’s the best part of my day,” Kellogg says. “That’s when I know I’ve made a difference.”

Top image: Among the many Chapman University alumni leading the way at Disneyland are, from left, Jessica Torrico ’09 (’10 teaching credential), Will Kellogg ’14, Nola Jackson ’88 and Matt Gray (MBA ’12). (Photo by Victor Lee ’10)