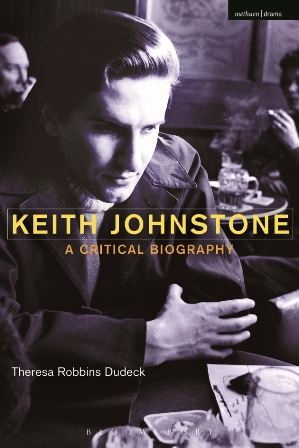 Think on your feet. Hear the customer. Make the pitch. Clinch the sale. Come back as needed with a better idea if all of the previous didn’t click on the first go. Good skills to learn in business school, yes?

Sure, but also in an acting class, says Theresa Dudeck, Ph.D., a new instructor in the Department of Theatre.

That’s why Dudeck created a new class she’ll introduce at Chapman University during interterm 2014 called Impro for People Skills, a theatre class designed for non-theatre majors. Dudeck is a theatre scholar and expert in applied improvisation, which uses the art of theatrical improvisation to help small groups, organizations and even corporate types loosen up their imaginations in the name of collaboration and problem-solving.

“It’s what’s needed in this new world of corporate development and training. It’s not business as usual,” she says. “It’s really about using improv and theatre skills to train them to be present, to engage an audience, to market an idea successfully, even to maintain eye contact.”

Such theatre skills are useful to all, from scientists who must explain their work, to entrepreneurs who need to woo backers, says Nina LeNoir, chair of the Department of Theatre.

“The ability to be present in the moment, receptive to and actively listening to others, and to react with honesty are all skills actors learn as fundamental tools.  These are also critical for success in life,” LeNoir says.

Dudeck learned the craft from the modern pioneer of the craft. She studied improv – or impro as they say in Europe – under the tutelage of Keith Johnstone, the internationally renowned director of modern improvisational theatre and inventor of the Impro System and Theatresports, the inspiration for the original Whose Line is it Anyway?

Dudeck is also the author of the newly-published Keith Johnstone: A Critical Biography (Bloomsbury, 2013), which chronicles the life of the British-born Johnstone, from his start as a playwright in Britain’s Royal Court Theatre to his founding of The Loose Moose Theatre Company and The International Theatresports Institute in Calgary, Canada. In addition, she is Johnstone’s literary executor and has already begun curating his papers and archives.

The single greatest lesson to come from studying his work, Dudeck says, is that to make way for success, there has to be room for failure.

“He’s very clear about creating that safe space so students can explore and create. You must change the student’s attitude toward failure,” she says. “That the most important thing.”

Registration is under way for interterm 2014, which begins Monday, Jan. 6. To see a full schedule of offerings, visit the Office of the University Registrar website.