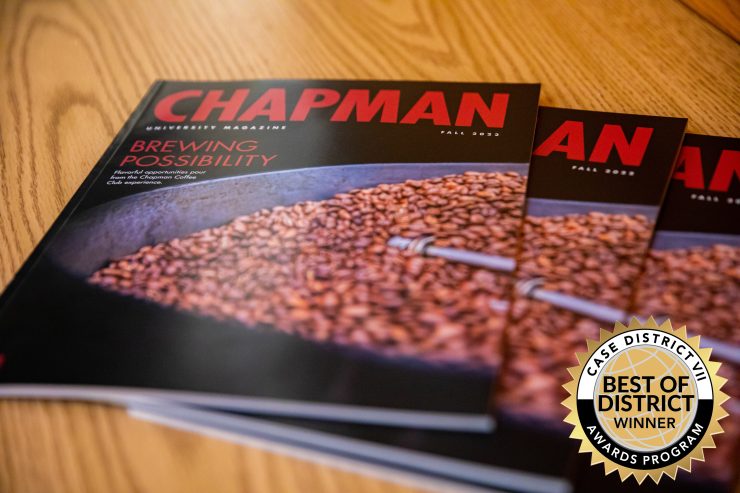 Chapman magazine, the flagship publication of Chapman University, has once again received industry recognition, this time being named a winner in the Best of District VII Awards by the Council for the Advancement and Support of Education (CASE).

Published by Chapman’s Office of Strategic Marketing and Communications (SMC), Chapman magazine explores the impact of Chapman students, faculty and staff from the local to the global. Several SMC staff members contributed to the publication, edited by senior editor Dennis Arp and designed by art director Julie Kennedy, with photography by Adam Hemingway, visual content director.

Separately, the International Association of Business Communicators awarded Arp with a Silver Quill Award for his piece “After Fleeing Afghanistan, Law School Alumni Find Refuge at Chapman.” The piece, which was recognized for excellence in business communications for outstanding writing, tells the breathtaking story of five Afghani alumni of Fowler School of Law, who after returning home to Afghanistan, were forced to flee with little warning. As Arp writes:

“Their stories are full of chaos but also resilience: marshal resources, leverage contacts, gather family and find a path to a new life in a new country. For three of the scholars, all women, it was even more dire. Fill a backpack, get to the airport, try to get on a flight. To anywhere. As soon as humanly possible.”

But, thanks to the swift and resourceful response of the Chapman Family, each of the scholars is safely in the U.S. with housing and a path forward for resuming their legal careers.

We are experiencing a network outage on the Rinker campus, in the 1st floor data room of 9401, which affects the first-floor network connectivity. The issue seems to be power related. IS&T is investigating to...

2022 W-2 tax statements are now available on the ADP dashboard for all employees. From the Employee Self-Service Portal on Working@Chapman go to My Money >W-2 > W-2s to be redirected to the ADP dashboard. You will...