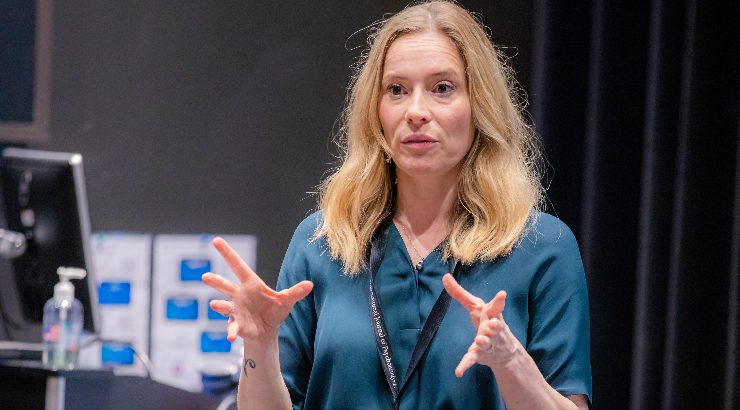 Kelli Fuery’s new book springs from her course “Film, Gender, and Sexuality,” in which she has tested ideas and content based in part on the engagement of class members.
Arts & Film

Reel Conversations in the Classroom Drive Chapman Professor’s Research As she guides students toward deep exploration of contemporary visual culture, Chapman film professor Kelli Fuery finds her own path to meaningful projects, including her latest book.

Many sources inspire Kelli Fuery to pursue new avenues of research, but one of the most reliable is right in her classroom. Where better to start than with the curiosity of her students?

“I tend to be a research-led teacher, so whatever we’re exploring in the classroom is where my research goes,” said Fuery, associate professor in Chapman University’s Dodge College of Film and Media Arts.

“The classroom is where I feel most alive and at home. It’s where I can be open about the places conversations can go rather than where I think they need to go.”

Fuery’s new book springs from her course “Film, Gender, and Sexuality,” in which she has tested ideas and content based in part on the engagement of class members.

“The students really responded to the material, and one thing that came up was the concept of the male gaze, which is very well known but often misinterpreted,” she said.

As the discussion migrated to existential thinkers, Fuery cited the work of French philosopher Simone de Beauvoir, and the students’ interest grew. But Fuery also sensed an opportunity to create deeper conversations.

“In that moment I thought, ‘Aha, this is my next project,’” she said.

That spark grew to become “Ambiguous Cinema: From Simone de Beauvoir to Feminist Film-Phenomenology” (Edinburgh University Press). In the work – Fuery’s fifth book – she uses the lens of women independent filmmakers to explore Beauvoir’s ideas on how ambiguity influences the ways we think about core concepts like ethics and freedom.

“Beauvoir is trying to come to grips with how war could happen again and also how people can learn to avoid such wars,” Fuery said. “So we currently have ambiguity tied to notions of how to be responsible. What does freedom mean? How do we develop ethics?”

One of the goals for her book is “to show ways in which Beauvoir’s work can be extended,” she said.

Each chapter focuses on a different concept, as explored through the art of a particular feminist filmmaker. Chapters include “Moments of Moral Choice in Debra Granik’s ‘Leave No Trace,’” and “A Cinema of the Borderlands: Lucrecia Martel’s ‘Zama.’”

“It’s my book, so my rules – I picked the filmmakers that I enjoy,” Fuery said with a smile.

So, does Fuery think the artists she chose were directly inspired by Beauvoir’s theories?

“I would say that Simone de Beauvoir’s ideas are a good example of germinal thinking,” she said. “Even though filmmakers – or students – may not be intentionally drawing from Beauvoir’s ideas, it is without question that the philosophy and phenomenology she pioneered infuse thinking about gender relations and gender studies. Women in the 21st century, without even realizing it, have been influenced in their attitudes toward issues such as freedom, relationships and how to be an ethical person.”

As with her classes, Fuery hopes that her work initiates deeper study and perhaps even artful new interpretations of ambiguity.

“I encourage the reader to … accept a slower working through of Simone de Beauvoir’s idea so that the entire notion of ambiguity can become a more personal, embodied, debated, self-defined concept and experience as it relates to the study of one’s relationship with film,” Fuery says in her introduction.

‘I Feel Like I’ve Fallen in Love With Film Again’

Film studies major Sophia Bain ’23 has taken six classes with Fuery and said she appreciates how students are consistently challenged to consider and apply concepts at depths beyond their comfort levels.

“Studying theories and philosophies in the context of film resonates with me the way that historical studies don’t,” Bain said. “With these explorations, I feel like I’ve fallen in love with film again.”

Bain and other Chapman students contribute to an annual themed issue of the national magazine “Film Matters,” for which Fuery is the special issues editor. Members of her class determine the topic and often write feature articles for the issue as it showcases the work of student scholars.

One such issue featured an interview by a Chapman student with Academy Award-winning director Bong Joon-Ho, while the upcoming issue includes a Q&A with acclaimed actor-producer Willem Dafoe. A master class series developed by Dodge College Dean Stephen Galloway has helped Fuery and her students create these rewarding connections.

“Access to these high-profile filmmakers has provided the students with wonderful scholarly opportunities,” she said. “Learning how to interview an artist is an art in itself.”

What better way to close the circle of scholarship than for class discussions to inspire meaningful student research projects?