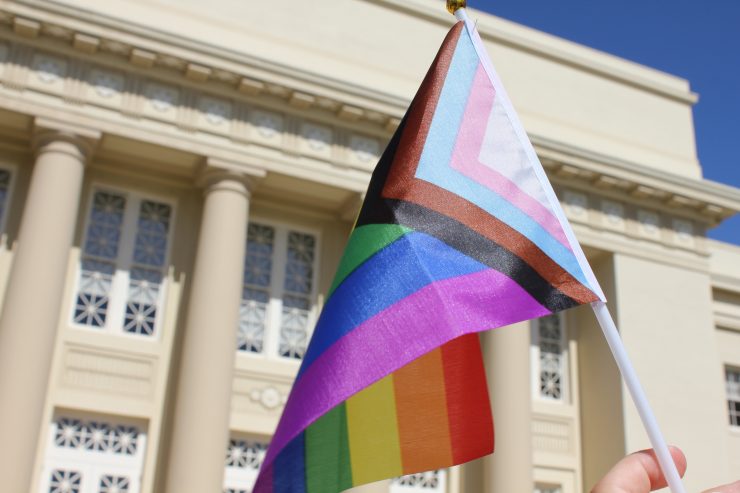 What’s the Difference Between LGBT History Month and Pride Month?

Pride Month has evolved into a national fixture each June, but October marks a perhaps lesser-known celebration – LGBT History Month.

Pride Month has been acknowledged on Chapman University’s campus, so some may wonder if LGBT History Month is also recognized.

“There is a compelling argument for why LGBT History Month makes sense to celebrate on a college campus – because the students are here,” says Reg Chhen Stewart, Ph.D., Chapman’s vice president of diversity, equity and inclusion. “But we also want to educate the community about the fact that there is both Pride Month and LGBT History Month, to get into the uniqueness of both of those months and why they’re celebrated at different times.”

According to the LGBT History Month site run by Equality Forum, in 1994 a Missouri high school teacher “believed a month should be dedicated to the celebration and teaching of gay and lesbian history.” He and other teachers and community leaders chose October because schools are in session and National Coming Out Day is Oct. 11.

Pride Month grew out of parades and other events that commemorated the 1969 protests against raids of popular gay bar Stonewall Inn in New York.

Even in California, where teaching LGBT history is required in public schools, “many of my students say they’re not getting this history.”

Barnard says that although Stonewall has been “canonized” in LGBT history, a demonstration to protest the arrest of men for “lewd conduct” at Black Cat bar in L.A. preceded Stonewall by two years. One of the first gay rights groups in U.S. history, the Mattachine Society, was founded in Los Angeles in 1950.

“(Mattachine founder) Harry Hay said, ‘The East Coast is finally catching up to the West Coast’,” Barnard says. “And it was the first time people actually challenged these arrests in court.”

Even closer to home, Chapman has its own LGBT history.

“We’ve had an LGBTQ Studies minor for a really long time, more than 25 years – which is pretty amazing. It’s longer than LGBTQ studies programs at most universities in the U.S.,” says Barnard, who is teaching a First-Year Foundation course on queer cinema.

Psychology major Valentyna Simon ’24 was able to get involved with student organizations like Queer Student Alliance, and Queer Trans People of Color Collective. She was also student co-chair of the advisory group that worked on Chapman’s resource webpage and safe spaces training.

Simon says it helps when campus groups and places like the Cross-Cultural Center boost awareness for history months. However, “at the end of the day it amounts to the research someone is willing to do,” she says.

On Oct. 17 the LGBTQIA+ Staff & Faculty Forum and some student groups hosted a mixer at the Cross-Cultural Center. Barnard spoke about LGBTQ-related historical events and students could talk about their organizations and tell their own stories, according to Jonathan Charres ’15 (MBA ’19), chair of the forum.

“We’ve never done something like this before,” says Charres, assistant director of diversity and outreach in the Office of Undergraduate Financial Aid. “I’ve definitely seen the university grow and seen us become more diverse and more welcoming, and we wanted to have something for the students.”

Rev. Nancy Brink, Chapman’s director of church relations, says LGBT History Month is “an opportunity to do some education.”

“It’s important for people in the queer community to understand the contributions those who have gone before us have made and that are not necessarily obvious,” says Brink, who leads two groups at Chapman’s Fish Interfaith Center – one for students interested in the intersection of spirituality with being LGBTQ+ and a support group for students who identify as transgender and nonbinary.

In spring 2023 the Office of Diversity, Equity and Inclusion will open recruitment for Chapman’s first director of LGBTQIA achievement.

“We’re excited about the opportunity to expand the DEI team by bringing in someone to advance our efforts in this area,” Stewart says.