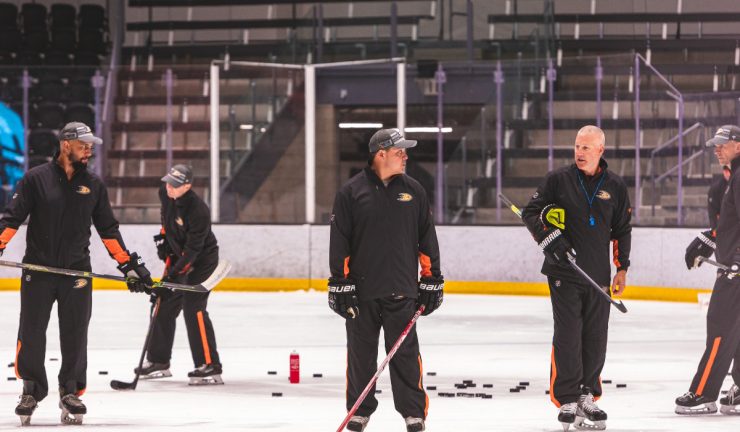 As a young hockey player, Sam Uisprapassorn ’05 was always told that he’d make a great coach. For a player who dreamed of being in the National Hockey League, that’s the kind of backhanded compliment that wasn’t always great to hear.

But now that Uisprapassorn is the head coach of the Colombian national hockey team and associate head coach for Chapman Hockey as well as in an NHL mentorship program, the idea of becoming a great coach seems like something that was always meant to be.

Uisprapassorn, whose father is Thai and mother is Colombian, started playing hockey when he was 9 years old –  just about the time that Wayne “The Great One” Gretsky came to play for the Los Angeles Kings and popularized the sport in Southern California.

As a student majoring in public relations and advertising, he joined the hockey team at Chapman, where hockey is a club sport and the team plays at the nearby Anaheim Ice.

“We were really underground,” says Uisprapassorn about his undergraduate team. “But we had this cool little group of guys, and we would set up these exhibition games against other universities.”

His coaching career kicked off shortly after graduation, when he was approached by a friend who needed help coaching a peewee hockey team. Once he started coaching youth hockey, it didn’t take long for Uisprapassorn to end up back at Chapman, this time as an associate coach for a renewed and increasingly competitive hockey team.

Uisprapassorn has a day job in the solar industry, plus a growing business manufacturing golf balls, so coaching hockey has always been a side gig, one that wouldn’t have gone any further than Chapman Hockey if he hadn’t gotten curious about the world of international hockey. A little investigation led him to the Colombian national team, which had debuted in 2014.

Inspired by the connection with his family heritage, Uisprapassorn fired off an email, offering his help.

“It’s one of those emails that you send and you’re like, OK, I’ll never hear back from these people,” says Uisprapassorn.

But he did hear back. “They were getting ready to go to a tournament, and they called me maybe five weeks before and they’re, like, ‘Hi. We’re having a tournament and we need you to meet us in Mexico City,’” he says.

And so he went to Mexico City and, with Uisprapassorn as the new head coach, the Colombian team won the tournament.

“I knew I was going to have a mixed bag of players,” he says, just as he’d had working with the Chapman team. “I’m a keep-it-simple-stupid kind of person, and that’s how I approach coaching. Hockey is a simple game. You just put it in that net and keep it out of the one behind you. I took that approach with them, and lo and behold, we won. At that point, Mexico was ranked 33rd in the world, and we beat them in the championship game for our first Pan American Championship.”

After winning six international championships with the Colombian team, Uisprapassorn started to get noticed and recognized by people in the NHL. He was nominated to participate in the NHLCA BIPOC Coaches Program, an initiative that supports Black, indigenous and coaches of color in hockey, and this summer he was invited to participate as a guest coach at the Anaheim Ducks development camp.

“A year ago, if you had interviewed me, I would have told you I coach a team that’s so close to me and my heritage, and I coach at my alma mater. What else could you want? I always used to say, short of the [Los Angeles] Kings calling, I have my ideal job as a coach,” says Uisprapassorn.

Now, though, he’s willing to do whatever it takes to get a shot at coaching in the NHL.

“Hockey made me the person that I am today,” he says. “I’m not a natural athlete. I had to work really hard to be a good skater. It’s not like I put on skates and I was whizzing down the ice like some kids can do.”

But persistence is one of his main character traits, he says, whether it’s getting into Chapman, getting ahead in his career or, now, pursuing success as a hockey coach.

“In May I went to the coaches association. I said, ‘Look, I want to find a way, a path to possibly working in hockey as a coach on some sort of level,’” he says. “I basically used the line, ‘I’ll pour coffee in LA or Anaheim.’ I just want to get some experience under my belt at a higher level. I just want to help out, contribute, learn.”

As the 2022-23 NHL season kicks off this month, Uisprapassorn will be getting the experience he craves, under the mentorship of Dallas Eakins, head coach of the Anaheim Ducks. No matter how well the team does this season, you can bet he’ll be shooting for the net.