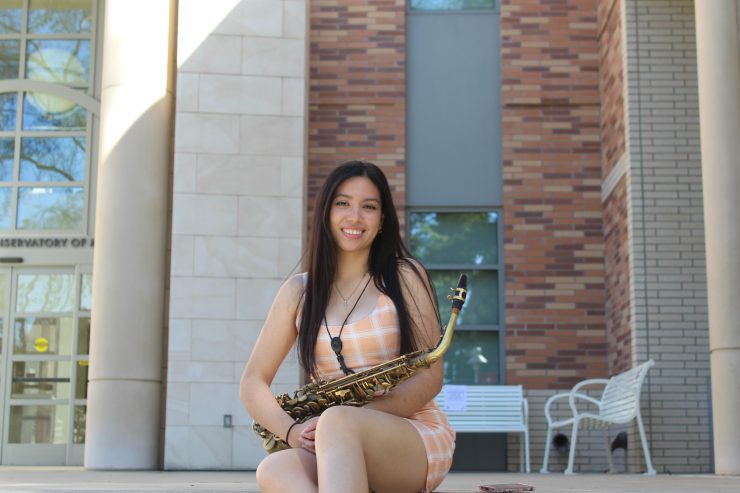 “My favorite memory, I would say, has to be very recent, actually,” says Erandi Sanchez ’22, when looking back at her time at Chapman. It was during a spring semester performance of the Mariachi Panteras.

“It was during the last song of the mariachi concert. I could see people in the audience and a lot of them were crying,” she says.

She found out why after the concert. “Many of them went to Chapman and never actually felt like they connected here, because of their Latino heritage. This was the first time that they felt seen as Hispanic people at Chapman,” she says. “That was very touching because I was able to be a part of the creation of the ensemble, and I was able to lead it. I’m glad that I saw that people who had been at Chapman years ago were able to come back and that there’s this community here at Chapman for Latinos.”

Sanchez, who started playing music when she was just four years old, was instrumental in establishing the mariachi ensemble during her time at Chapman. Though her primary instrument is saxophone, the performance and music education major also plays violin, harp, saxophone, piano and clarinet, plus the guitarrón and vihuela — specialized guitars used to play mariachi music. She also sings.

Her passion for mariachi has deep roots.

“It was something that I knew from a very young age. It’s obviously something that connects to my culture, and my parents, so that always brought us together as a family. And it also made us connect with other families like mine, and other friends that I had met later in school as well. If it weren’t for mariachi, I actually probably wouldn’t have entered the band program in junior high and then continued it in high school,” she says.

After years of performing mariachi with her family, it seemed natural to major in performance when she started college. Along the way, she realized that teaching music could be fun, too.

“I had experience being a class leader and section leader and things like that. I decided that I wanted to do more, and that it would be a great career,” she says.

After graduation, Sanchez will continue at Chapman to earn her teaching credential and Master of Arts in Teaching (MAT) Music Education.