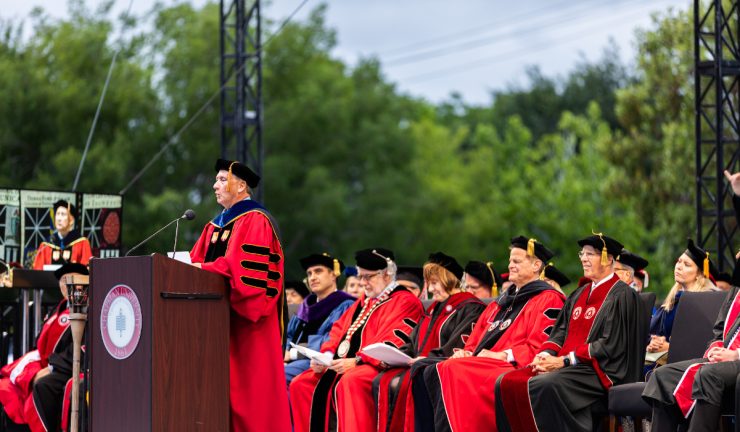 This year, as Chapman celebrates the graduating Class of 2022, the university will award honorary degrees to four individuals who have distinguished themselves in their careers and their lives. A lawyer who transformed the legal system with technology. A teacher who has fostered generations of mathematicians and scientists. A neurologist whose research has greatly impacted our understanding of aging. A Nobel Peace Laureate who overcame tragedy to become a champion for survivors of sexual violence around the world.

“As leaders and changemakers in their fields, these individuals represent the ideals which every student at Chapman aspires to,” says Chapman President Daniele Struppa. “Each of these individuals has changed the world for the better. We are honored to have them here with us at this time of celebration and want to recognize them for all that they have achieved.”

Robert Alvarado Jr. has been a significant, leading figure in incorporating technological advancements into the legal profession. In 1995, along with his then law partner, Mark Wapnick, he founded the company CourtCall, which led a movement to create technology capable of allowing attorneys and litigants to appear in court remotely. This helped transform the legal system, reallocating time, energy and money as remote options became available.

Besides aiding lawyers and judges, CourtCall’s endeavors also led to a more equitable justice system by reducing costs in a way that would advance the interests of those unable to afford a lawyer or qualify for legal aid. Overall, CourtCall has helped to remove tons of CO2 from our air, helping to save the legal industry hundreds of millions of dollars and generating millions of dollars for courts.

Always looking for ways to serve the broader community, Alvarado serves on the Dale E. Fowler School of Law’s advisory board and guides CourtCall’s philanthropic efforts toward scholarship funds at multiple law schools.

Dr. Claudia Kawas is a neurologist with a distinguished career investigating aging, dementia and the oldest-old — individuals 90 and older. Her body of work includes more than 200 peer-reviewed manuscripts, exemplifying her influence in the sphere of neuroscience. As the co-principal investigator of “The 90+ Study,” one of the largest studies of the oldest-old globally, Kawas spearheads research that significantly impacts our understanding of the physical and mental diseases associated with aging.

Working at University of California, Irvine, she is a professor, the associate director of the Institute for Memory Impairments and Neurological Disorders, and the Al and Trish Nichols Chair in Clinical Neuroscience. Her commitment to public health is further reflected in her work as a physician and her service to various committees, such as the National Institutes of Health and the U.S. Food & Drug Administration.

Human rights activist and Nobel Peace Laureate, Nadia Murad is a leading advocate for survivors of genocide and sexual violence. Her New York Times bestselling memoir, The Last Girl: My Story of Captivity, and My Fight Against the Islamic State, is a harrowing account of the genocide against the Yazidis in Iraq and Nadia’s imprisonment by the so-called Islamic State (ISIS).

In 2016, Murad became the first United Nations Goodwill Ambassador for the Dignity of Survivors of Human Trafficking. That year, she was also awarded the Council of Europe Václav Havel Award for Human Rights and Sakharov Prize for Freedom of Thought. In 2018, she won the Nobel Peace Prize with Dr. Denis Mukwege. Together, they founded the Global Fund for Survivors of Conflict-Related Sexual Violence.

Murad is the founder and president of Nadia’s Initiative, a nonprofit dedicated to rebuilding communities in crisis and advocating for survivors of sexual violence.

Murad is the keynote speaker at this year’s University Commencement ceremony, and will begin a three-year appointment as a Presidential Fellow.

Tuong Nguyen has been a fixture of the development of young minds at the high school and collegiate levels for decades. Previously, he taught at Santa Ana College for more than 24 years, and he has anchored advanced mathematics courses, including advanced placement coursework in differential and integral calculus, at Mayfair High School for almost 30 years now.

His ability to make advanced concepts accessible has earned him a deep respect among his students and encouraged many of them to pursue careers as engineers and scientists in a range of sectors, from the government to aerospace corporations. Having taught himself mathematics while being held in a labor camp in Vietnam, he inspires students with his life’s story of resiliency and his ability to pass on unique mental tactics.