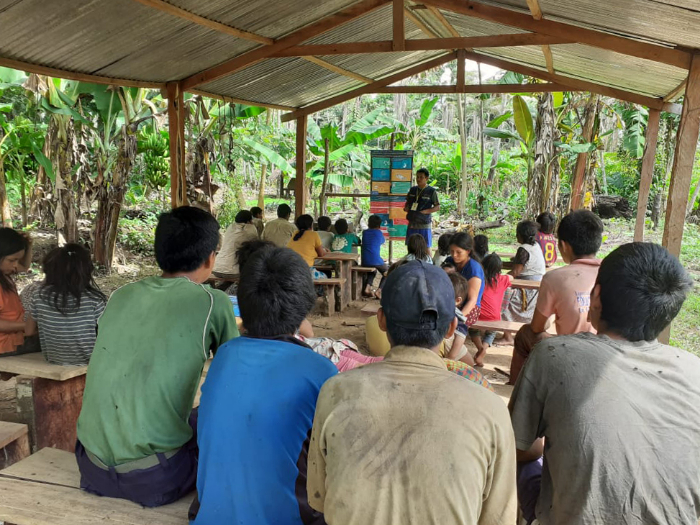 During the COVID-19 pandemic, Chapman Professor Hillard Kaplan and his Tsimane Project colleagues worked to provide education as they partner with village leaders on research and health protection plans.
Health & Behavior

Amazon Health Study Finds Low Rates of Dementia Among Indigenous Villagers Study conducted during a Chapman-led project learns that Tsimane and Moseten people 65 or older have dementia rates of 1%, vs. 11% in the U.S.

In the study, published in March in Alzheimer’s & Dementia: The Journal of the Alzheimer’s Association, Tsimane and Moseten people 65 or older were found to have dementia rates of about 1%, compared with 11% for Americans in the same age group.

These new research results support previous findings about healthy aging involving the Tsimane and Moseten, who are among the last people on Earth still living a hunter-farmer-forager lifestyle. Those earlier results, collected as part of the Chapman-led Tsimane Health and Life History Project, show that the Amazon villagers have the world’s lowest reported levels of vascular aging.

“Something about the pre-industrial subsistence lifestyle appears to protect older Tsimane and Moseten from dementia,” said Margaret Gatz, lead author of the Alzheimer’s study and a professor of psychology, gerontology and preventive medicine at USC.

The international team of Tsimane Project researchers is led by Kaplan, a co-author of the study. Kaplan is a professor of health economics and anthropology at Chapman who has studied the Tsimane for two decades.

Researchers used CT brain scans, cognitive and neurological assessments and culturally appropriate questionnaires — facilitated by a local team of trained translators and Bolivian physicians — to diagnose dementia and cognitive impairment among the Tsimane and Moseten.

“We’re in a race for solutions to the growing prevalence of Alzheimer’s disease and related dementias,” Kaplan said. “Looking at these diverse populations augments and accelerates our understanding of these diseases and generates new insights.”

The study found only five cases of dementia among 435 Tsimane people and just one case among 169 Moseten aged 60 or older.

Researchers also learned that the study participants found to have dementia or mild cognitive impairment frequently had prominent calcifications of their intracranial arteries. These study participants often displayed parkinsonian symptoms during neurological examinations and cognitive deficits in attention and spatial awareness.

Although calcifications were more common among the cognitively impaired, researchers also observed these vascular calcifications in the CT scans of those without dementia or mild cognitive impairment. The researchers say that more research is needed to understand the role of vascular factors as well as infectious and inflammatory disorders. Tsimane Project research is ongoing, so additional data-gathering is planned.

In his role as project lead, Kaplan works with Tsimane and Moseten elders to ensure mutuality. As the COVID-19 pandemic encroached, research was suspended and a plan was developed to protect villagers from infection.

As the project continues, the team acquires significant insights about how diet and lifestyle affect health. If the industrialized world emulated the Tsimane and Moseten in diet and daily activity, it would save millions of lives and billions of dollars in health care costs, Kaplan says.

“We are our own worst enemies,” he notes.