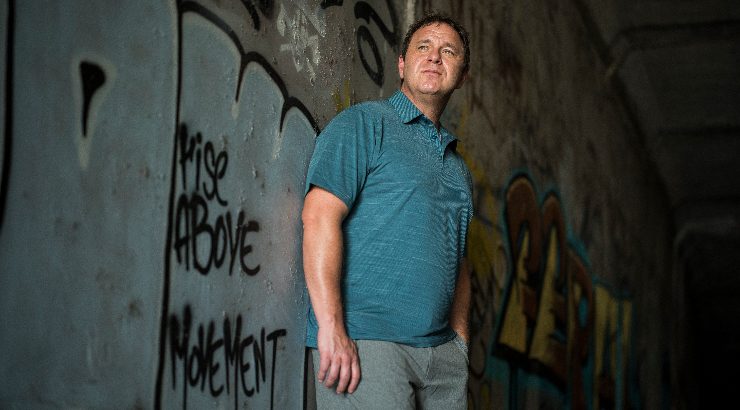 Testimony of Chapman Sociologist Pete Simi Leads to Judgment Against Organizers of Charlottesville Rally Professor Simi’s research on white supremacists who planned the Unite the Right rally reflects his commitment to exposing the hidden spaces of hate.

Two weeks into the high-profile trial of the white nationalists who organized the deadly Unite the Right rally in Charlottesville, Va., Chapman University sociologist and hate group researcher Pete Simi finally got his chance to testify as an expert witness.

He was more than ready for the moment.

“Simi’s testimony was devastating,” the Slate online news magazine reported in its trial coverage. “He explained, in the most academic terms possible, the degree to which the performance artistry of the white supremacists is not accidental. It’s deliberate stagecraft, constructed to promote both violent spectacle and plausible deniability.”

Nine days later, a jury found Richard Spencer, Christopher Cantwell and other white supremacists and neo-Nazis liable of conspiracy for their role in the 2017 rally that injured dozens and killed Heather Heyer, who was hit by a car driven into a crowd of counter protesters. The jury awarded the plaintiffs more than $25 million in damages.

The result in the civil trial was particularly satisfying for Simi, an associate professor in Chapman’s Wilkinson College of Arts, Humanities, and Social Sciences whose intensive research takes him deep inside the minds and motives of white supremacists. Simi, co-author of the book “American Swastika: Inside White Power Movement’s Hidden Spaces of Hate,” has lived with those espousing racist ideology to try to understand them better. He has compiled 20,000 pages of life histories from interviews with former members of white supremacist groups.

He also studies events like the Unite the Right rally, including online messaging before and after such events. For the trial of the rally organizers, he and sociology research colleague Kathleen Blee of the University of Pittsburgh compiled a 63-page research report showing how the defendants had worked together to promote the event while also trying to hide behind coded messaging full of dog whistles and doublespeak.

Revealing the Violent Intent Behind the Rally

Simi’s testimony was based on the report he and Blee compiled, much of which was gleaned from alt-right conversations on the chat platform Discord.

“When you go behind the scenes and look at where Unite the Right was planned on Discord, and you see the volume of references to using violence during the rally, it’s overwhelmingly clear that this event was organized for the purpose of committing violence,” Simi said.

The judgment has the potential to greatly deter the white supremacist movement, Simi said. But beyond that, the jury’s decision “underscores why the court system is so important,” he added. “It offers an opportunity to capture truth in terms of the historical record. Those two days in August 2017 in Charlottesville, Virginia, needed to be recorded in a court of law.”

On a personal level, the more than 1,000 hours of research time Simi spent poring over hateful conversations online and then testifying in court also produced some emotional scars, he allowed.

“A lot of what we went through is vile, toxic material advocating for various kinds of violence, in some cases using the crudest of images,” he said. “It’s something I’ve been immersed in for a long time, but it still takes an emotional and psychic toll. In essence, you’re exposing yourself to poison.”

So it matters that the effort wasn’t in vain, Simi added.

“Getting into this deep level of detail is necessary to find the truth that’s below the surface,” he said. “It’s worth it to expose that truth.”

Meeting Those Most Closely Affected by the Hate

A particularly memorable moment during the trial came moments after Simi’s testimony, during a chance encounter with Marcus Martin, one of the plaintiffs. Martin’s leg was shattered at Charlottesville when the car that killed Heyer also hit him, flinging him into the air.

In the lobby of a hotel across town from the courthouse, Simi met Martin and Marissa Blair, who had also testified in the trial. Blair narrowly escaped physical injury during the rally when she was pushed out of the way of the speeding car by her then-fiancé, Martin.

The two expressed their gratitude to Simi for his testimony and especially for his steadfast demeanor during cross examination by multiple defense attorneys as well as white supremacist defendants who represented themselves.

“The most memorable part of the trial for me was the chance to talk with Marcus about his experiences and where he’s trying to go with his life now,” Simi said.

“Marcus got the chance to testify in court, to confront some of the perpetrators. That he would also express his appreciation to me really affected me,” Simi added.  “That’s why we went through all this material and worked on this report for three years, to try to help these individuals find some justice. And that’s what will stick with me most – the chance to talk with those who were most closely affected and who I’d never had the chance to meet before.”