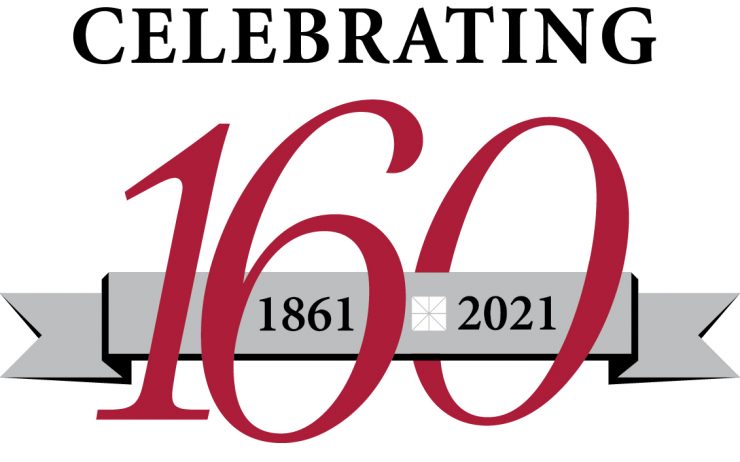 President Daniele Struppa shared the following message with the Chapman University community on May 10, 2021:

This year marks a tremendous milestone for Chapman University. In 2021, we are celebrating the 160th anniversary of our opening. We will recognize and commemorate the university’s many accomplishments with a year-long celebration of activities, ending on the actual anniversary date of March 4, 2022.

Many of you have heard our story. In 1861, just 11 years after California became the 31st state, Disciples of Christ in the Northern California town of Woodland opened Hesperian College. Leaders of the group intentionally timed the college’s opening so that its first classes would be held on the morning of Abraham Lincoln’s inauguration. The school was ahead of its time: open to women as well as men and students of all races. While that school eventually closed, the assets were soon put to good use by a new venture gaining traction in Los Angeles.

When Disciples entrepreneur Charles Clarke Chapman challenged the Disciples in Southern California to match his $400,000 gift to establish a college in 1919, 4,441 founding donors stepped forward with support. With its campus being built, California Christian College held its first year of classes in a church, beginning on September 20, 1920. In 1934, its board honored C.C. Chapman’s exceptional vision and generosity by naming the college after him, and in 1954, Chapman College relocated to the beautiful city of Orange.

When we became Chapman University in 1991, our momentum continued to accelerate with dramatic growth in enrollment and physical space, including a new Irvine campus in 2013. During the last decade alone, we have added new schools, new colleges and new programs. We also achieved prestigious Phi Beta Kappa status and R2 designation as a Doctoral University with high research activity, and we moved into the U.S. News National Universities category, joining the nation’s most well-known institutions.

Specific plans have been made to mark our anniversary at the opening of the school year, Convocation, Homecoming on November 5-6, and many other events. I am particularly happy that our celebration will include the opening of Swenson Hall of Engineering and the 40th Anniversary of Chapman Celebrates which will fall on February 18-19, 2022, in conjunction with our State of the University. I encourage each of you to incorporate the university’s 160th anniversary into your plans.

As we near the end of this challenging but remarkably successful academic year, I am excited about the opportunities for the coming year. Reuniting after such a long time apart would be reason enough to celebrate; doing so while commemorating our 160th anniversary is all the more special. Working together, I know we will make Chapman’s 160th year, its best year yet!

Learn more about how Chapman is building on the past to transform the future.