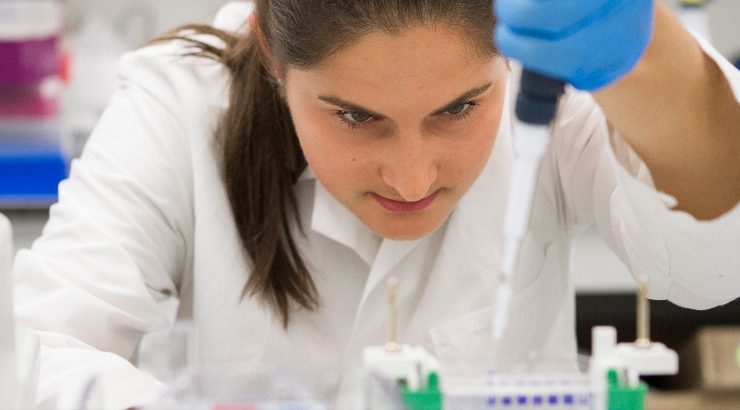 A new award from the Beckman Scholars Program will support up to five Chapman undergraduates studying chemistry, biochemistry, biological sciences or an interdisciplinary combination.
Schmid College

The prestigious national program is funded by the Arnold and Mabel Beckman Foundation, whose mission supports basic research in chemistry and life sciences.

Chapman University has been selected as a 2021 Beckman Scholars Program Awardee. This prestigious national program is funded by the Arnold and Mabel Beckman Foundation, whose mission supports basic research in the chemistry and life sciences.

The award will support the Chapman Beckman Scholars Program, a 15-month mentored research experience for up to five undergraduate students studying chemistry, biochemistry, biological sciences or an interdisciplinary combination of these subjects within Chapman’s Schmid College of Science and Technology.

Chapman is one of 12 institutions selected after a rigorous invitation-only application process that included a two-part review led by a panel of scientific experts. Other awardees include the University of Southern California, Wellesley College and Texas A&M University.

The Beckman Scholars Program will provide incredible new opportunities for Schmid’s undergraduates to develop as independent researchers and future leaders in their fields, said Mike Ibba, Ph.D., dean of Schmid College of Science and Technology.

The award further supports one of Ibba’s top priorities in his first year as dean, the development of new programs and activities to increase diversity, equity and inclusion to advance cultural change and growth in the sciences.

“Schmid College believes that the best science happens when diverse individuals are supported, included and empowered to share their voices as a part of scientific discovery. The Beckman Foundation recognizes this importance and this award will support our efforts to advance excellence in STEM,” Ibba said.

Students selected will receive funding to pursue an independent research project under the guidance of a Beckman Scholar faculty mentor at Chapman. In addition, Beckman Scholars will have opportunities to attend the annual Beckman Symposium and meet talented peers and mentors within the science community.

The award is further validation of Chapman’s rising national research reputation, especially in the sciences. The University has made significant investments in research, recently building the Keck Center for Science and Engineering and increasing the number of full-time science faculty. In 2018, Chapman was granted R2 status by the Carnegie Classification of Institutions of Higher Education and in 2020 received its second consecutive year national ranking by U.S. News & World Report (currently ranked #124).

Schwartz and Bisoffi said Schmid College plans to use early and evidence-based curricular engagement to develop scholars’ confidence, self-efficacy, critical thinking skills, and knowledge about scientific processes to diminish barriers for students applying for and participating in independent scientific research.

We believe this transformational program will have a catalytic and enduring effect on the quality of sustained undergraduate research experiences at Chapman while supporting our mission of developing future global science leaders, Schwartz said.