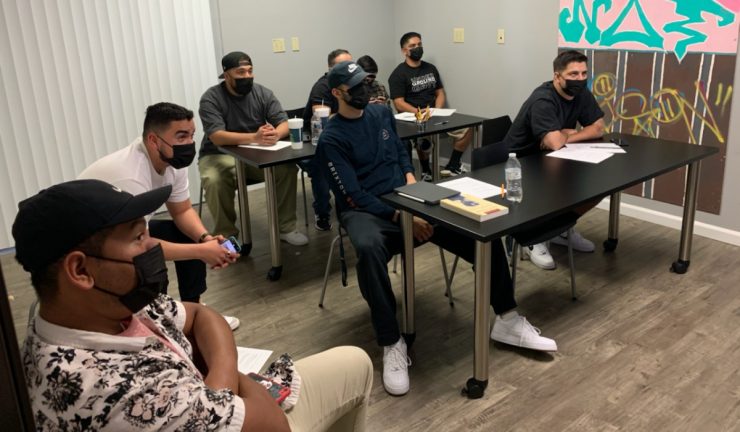 Chapman Partners with Underground GRIT to Provide Courses for the Formerly Incarcerated A sociology professor and Chapman alumnus are transforming lives and communities by offering educational opportunities for youths impacted by the U.S. criminal justice system.

Miguel Magallon has a strong academic interest in law, and as a formerly incarcerated teenager, he also has a deeply personal connection to the topic.

When Magallon was first arrested, he did not have the knowledge or understanding to communicate what he wanted out of his case to his public defender. So he read, researched all the details of his arrest and studied what was available at the prison law library. It was through this experience that Magallon earned seven years off his case, and found his desire to become an attorney.

Although Magallon knew that he wanted to pursue law for his career path, he was aware that the odds were not in his favor. The barriers facing formerly incarcerated people reentering the community are unrelenting, and having a criminal record eliminates a lot of their educational access. Plus, the majority of correctional education programs are for the adult population and rarely serve young people who have been impacted by the juvenile justice system.

Victoria Carty, Ph.D., associate professor of sociology in the Wilkinson College of Arts, Humanities and Social Sciences, was familiar with these educational obstacles through volunteer teaching at Orange County Juvenile Hall.

“Once juveniles get released, no one is forcing them to go to school, and on top of that, there’s all of these forks in the road to get to college,” said Carty, whose research focuses on community engagement and criminal justice reform. “Most of the time, these students really just need an opportunity.”

Addressing this need, Carty teamed up with the Orange-based nonprofit, Underground GRIT (UG), to provide formerly incarcerated youths with courses taught by Chapman University faculty. The Chapman-UG partnership is an extension of Underground GRIT’s reentry program, where the organization assists those who have been system-impacted through services like education, mentorship, vocational training and mental health support.

Carty is teaching the first course offered by this partnership. She adapted her Social Stratification (SOC 225) class at Chapman into an eight-week certificate program with an emphasis on class and race issues. During their course discussions, Carty encourages her students to relate the sociological concepts to their lived experiences with the criminal justice system. The other component of the class is to prepare the students with skills necessary to advance in higher education through lessons like efficient note taking, essay outlining and formatting, basic computer training and email etiquette.

“Our goal is to break the school-to-prison pipeline, and get the students thinking about new possibilities, college, and a promising future,” said Carty.

Due to the pandemic, Carty’s class is taking place remotely with students meeting once a week either virtually or at the UG Office to utilize their video conferencing technologies.

To qualify for Carty’s sociology class, interested students are interviewed and required to submit an application, where one of the essay prompts is to write a letter to their future selves.

Sharon Tang ’18, program manager at Underground GRIT, helps the reentry students with their applications. She explains that it’s a vision casting exercise for them to gain hope for their futures as they imagine where they see themselves in 10 years.

“This whole application process that we have with the students has been very empowering for them because a lot of times they haven’t written an essay or an application ever,” said Tang. “Through their writing and through their assignments, they finally have an opportunity to find their voices and be expressive about their experiences in ways that they didn’t really have before.”

Magallon is one of 13 students that is enrolled in Carty’s class. He says that the experience has been transformational—one that has allowed him to take a step closer toward his dream of becoming an attorney.

“It’s teaching me to open my mind to different things and express myself a lot more,” he reflected. “I don’t express myself the way that I used to. Now I tend to think by other people’s perspectives. That’s what the class has really been showing me lately.”

From Internship to Partnership

The partnership stemmed from Tang’s senior-year internship at Chapman with Carty’s initiative at juvenile hall. Tang, who graduated with a degree in biological sciences with minors in sociology and the University Honors Program, says that her interactions with the juvenile hall students was the “most meaningful experience” from her undergraduate career. That internship solidified Tang’s pursuit and dedication toward serving youths who are breaking cycles perpetuated by trauma.

After Chapman, Tang began her job at Underground GRIT and together with Carty, they were instrumental in the development of the Chapman-UG partnership. Currently a graduate student at the University of California, San Diego (UCSD), Tang is earning her master’s in public health with the intent to further develop interdisciplinary solutions that will mend voids in communities.

The Chapman-UG partnership is one of seven projects supported by the Innovation in Diversity and Inclusion Research, Scholarship, and Creative Activity awards that Chapman made available to faculty. This new award was created for innovations that address critical gaps in knowledge related to equity, diversity and inclusion, and in all, the seven teams were funded for a total of $103,794.

In addition to Carty and Tang, other contributors to the Chapman-UG partnership include Gregory Barraza, Ph.D., adjunct professor at Attallah College of Educational Studies, and the co-founders of Underground GRIT, Suzanne Campbell and Crystal Anthony.

With this grant, Carty hopes to grow the program by working toward an educational model, called the inside-outside program, where Chapman students would learn side-by-side with the Underground GRIT students. She also wants to expand Chapman’s educational reach by financially assisting the UG students with scholarships so they can receive college credits at the university.

Correctional education programs are one of the most effective ways to keep people from coming back to prison, reducing recidivism rates by 43%. This makes reentry programs like the Chapman-UG partnership crucial in cutting the chances of a child or adolescent participating in future criminal behavior as an adult. By tailoring the Chapman courses toward young people and getting them involved in educational opportunities early, the program is designed as a preventative measure to disrupt recidivism cycles, and both Tang and Carty are already witnessing the life-changing impact that it has made on the students and themselves.

“My favorite part is getting little text messages from people after helping them with their assignments. They’ll say things like, ‘Thank you for helping me believe in myself because I never thought I could do that until now,’” Tang shared. “It’s just so powerful to prove to these students that they can do more than what they see and that they are more than the worst thing they’ve ever done.”

“They (the Underground GRIT students) have taught me more than I could ever teach them,” Carty adds. “Most of the focus has been on the crime itself and not on why are people getting in trouble with the law? Or why are people dropping out of school? If you pay attention to them, make them job ready, make them school ready, a big difference can be made.”