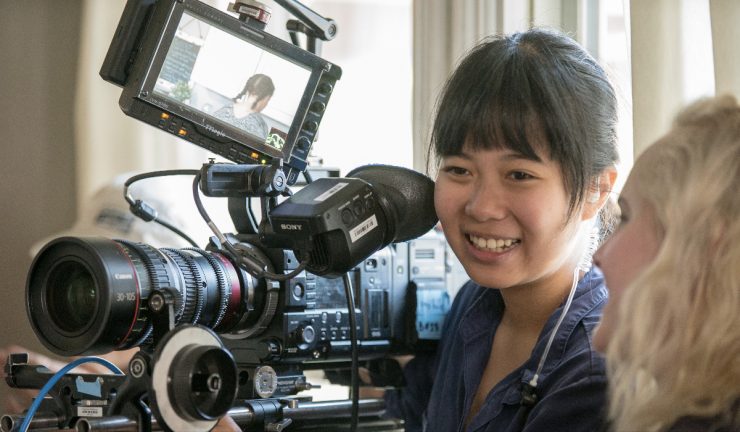 Chapman Rises to No. 4 in The Wrap’s National Rankings of Top Film Schools Dodge College’s surge past “legacy” film schools is a testament to its “uniquely collaborative environment,” Dean Stephen Galloway says.

Dodge College continues its climb into the rarefied reaches of national film school rankings with the release of The Wrap’s Top 50 Film Schools issue. The No. 4 placement achieved is the film school’s highest ever.

Chapman University continues its climb into the rarefied reaches of national film school rankings with the release today (Oct. 16) of The Wrap’s Top 50 Film Schools issue. The No. 4 placement achieved by Chapman’s Dodge College of Film and Media Arts is its highest ranking ever.

“Reaching No. 4 in The Wrap’s listings is a terrific testament to Chapman and Dodge’s uniquely collaborative environment,” said Stephen Galloway, dean of Dodge College. “It’s especially notable because, for the first time, we’ve been ranked higher than some of the ‘legacy’ film schools that have had decades to build their alumni and reputation.”

In August, Chapman also climbed in The Hollywood Reporter’s annual rankings, reaching No. 6 on that prestigious list.

“All rankings are to some degree subjective; what isn’t subjective is the quality of our faculty, staff and students,” Galloway said.

Praise for a Focus on Adding Diverse Voices to Faculty

In praising Chapman, The Wrap cited the influence of Galloway, who earlier this year was named the second dean in Dodge’s history, as well as the addition of 16 new faculty members of color, including 11 women.

“A Pipeline for Brilliant Youngsters”

Additionally, the Chapman film school was praised for its new Mentorship Program “to create a pipeline for brilliant youngsters from underserved communities,” as well as a new Careers Office led by “longtime faculty star” Jill Condon and former Creative Artists Agency (CAA) agent Joe Rosenberg. Galloway says the office “will be the best of any film school in the world.”

“There’s never been a better time for a film grad to get outta Dodge — and into Hollywood,” The Wrap said in wrapping up its evaluation of the Chapman film school.

The Wrap’s annual rankings are compiled based on an anonymous poll of more than 2,000 entertainment industry professionals, educators, deans, filmmakers and film pundits, “along with experts tasked with evaluating each school,” the publication said.