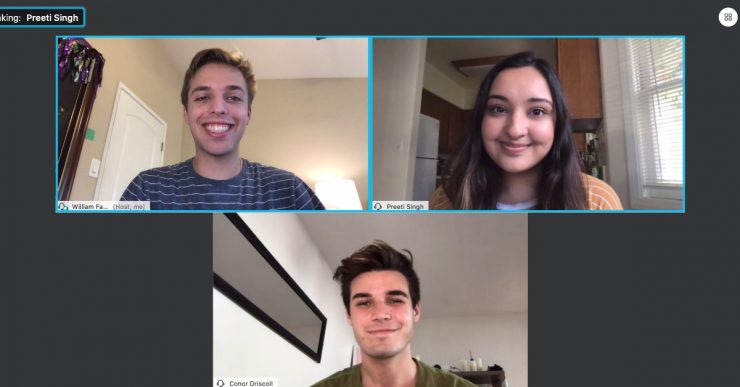 Gray Fagan ’21 has mastered the TikTok stage. The film production major at Chapman University’s Dodge College of Film and Media Arts has channeled his passion for storytelling into producing 60-second TikTok skits that draw viewers in and make them laugh.

But he and fellow Dodge classmates took that creativity to a whole new level when a TikTok they created for HBO Max went viral. The video – a makeup challenge inspired by the HBO series “Euphoria” – amassed more than three million views and one million likes. And that was just the beginning.

As social media interns for WarnerMedia’s streaming platform HBO Max, Fagan and his classmates, Preeti Singh ’21 and Conor Driscoll ’21, have helped grow the company’s TikTok channel from 29,000 followers to an audience of more than 169,000 to date. The three Panthers were among the five interns selected for the competitive internship that has immersed them in industry experience unlike any other.

“Before this job I had never had any career or internship experience,” said Gray. “But I’m a big TikTok guy and HBO is of course known for amazing television and film, so I was immediately excited about the opportunity.”

Preparation for their new role had long been in the making. TikTok skills were anything but lacking for the three Chapman interns who had found a creative outlet in the popular video-sharing app during quarantine. However, by day one it became clear that to keep up with the fast-paced entertainment industry, they would also need to leverage the many skills they had honed at Dodge.

“By the end of our first day they wanted five to 10 TikTok content ideas ready,” says Singh, a public relations and advertising major at Dodge. “We didn’t expect that for the first day, but we knew it’s a fast-paced industry so we had to work through it.”

To navigate the dynamic environment, Singh and her classmates reached into their toolkit of film school lessons, chief of which was storytelling.

“Dodge taught us the importance of storytelling from day one,” she says. “Being able to implement what I learned in my PR classes and learning to market a huge brand like HBO Max using new digital platforms like TikTok, really helped prepare me for this role.

For Driscoll, a business administration major and television minor, it was a freshman-year visual storytelling class that was foundational. “That class taught me the basic tenets of storytelling, which you need for any storylining, especially in short-form content like TikTok,” he said.

That firm grasp on storytelling along with lessons on branding and marketing came in handy as they worked together to tell HBO Max stories through TikTok, Driscoll says.

With momentum building in their last week, the interns felt their work wasn’t quite finished.

“During our last day in our morning meeting, we all agreed we didn’t want it to be our last day,” said Singh. “In most companies you’re just an intern, but HBO Max always encouraged us to speak and use our voice, so we knew we needed to do something about it,” she said.

Together they pitched a proposal to HBO Max leadership to be kept on as interns, and in typical social media intern-fashion, they made a TikTok to go along with it.

Within days – in the middle of last-minute projects and virtual farewell parties – they received news that they would be kept on for an additional three months.

“I’ve had the opportunity to work with dozens of top-notch interns throughout my career,” said Jordan Schultz, director of audience development at HBO Max. “But there’s something special about this group, especially when they work together. From acting and comedy to video editing and production, the HBO Max social interns have an incredible diversity of talent and creative thinking. It’s no wonder their most viral hits feature all five of them.”

Tapping Into the Dodge Network

Now, four months into their internship, the three Panthers say they’re grateful for the real-world experience they’ve gained and the Dodge network that helped get them there.

“There’s nothing stopping students at Dodge because people there want to support you, collaborate with you and see you grow,” says Singh, who found the internship listing while browsing through the Chapman Film Connection page. “The opportunities are there. “If you’re interested, go for it.”

For Fagan, who hopes to take his passion for storytelling into the realm of post-production, it’s been an unparalleled experience.

“I have gained incredible insight into the film and television industry by working with executives from all over the WarnerMedia company,” he said. “I’m thankful for the community at Dodge that’s there looking out for each other and sending each other job postings. For a film student, working his way into the industry, you could not dream of a better opportunity.”