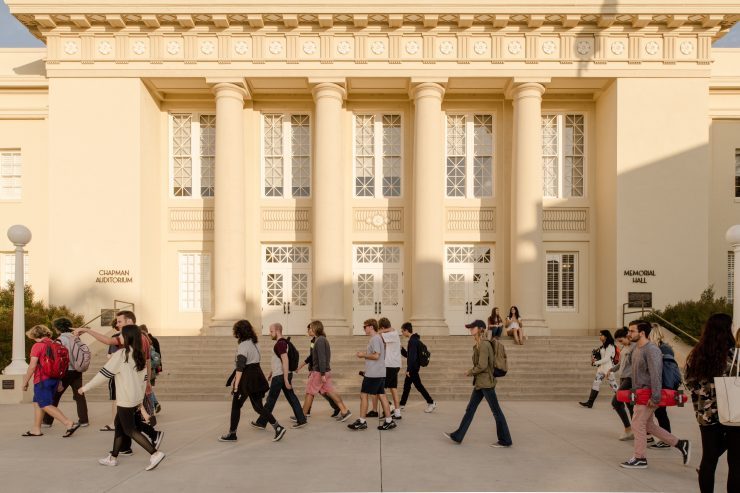 U.S. News & World Report Ranks Chapman Among the Nation’s Top-Tier Universities Excellence in Best Undergraduate Teaching is noted as a Chapman distinction in the 2021 rankings.

For the second consecutive year, Chapman University is listed among the nation’s top universities. Excellence in teaching is among the strengths noted in the report.

The annual U.S. News report listed Chapman at No. 124 in its National Universities category, up from No. 125 in last year’s ranking. Chapman achieved entry into the category just last year, a distinction reflective of its rising reputation, growing research programs and designation as an R2 status institution with high research activity.

“Continuing as a top-tier university among the nation’s best institutions of higher education is validation of Chapman’s growing excellence and rising reputation. It reflects our ongoing commitment to deliver personalized educations of distinction while advancing our role as a world-class research institution,” said Chapman President Daniele Struppa.

As a top-tier university Chapman is included with more than 400 of the leading private and public research universities across the United States, from Princeton and Harvard to UCLA and UC Berkeley.

In addition, for the second year the publication notes Chapman for excellence in Best Undergraduate Teaching (No. 39) and as one of the Best Colleges for Veterans (No. 86). The entire campus community contributed to those achievements, said Provost Glenn Pfeiffer.

“Our strong showing in these rankings speaks to the dedication and contributions of our faculty and staff, who all have a role in helping Chapman advance its rising reputation. Their superb teaching and innovation help strengthen the key areas these rankings consider, from alumni employment to research success,” Pfeiffer said.

Before moving into the National Universities group, Chapman was previously ranked in the Western region, where it rose to No. 5 among nearly 100 universities from California, Oregon, Washington, Arizona and Texas.

The U.S. News lists follows closely on the heels of other rankings success at Chapman, including Dodge College of Film and Media Arts’ rise to No. 6 on The Hollywood Reporter’s annual list of the nation’s best film schools. Chapman also made significant gains in the recent U.S. News & World Report graduate school rankings.