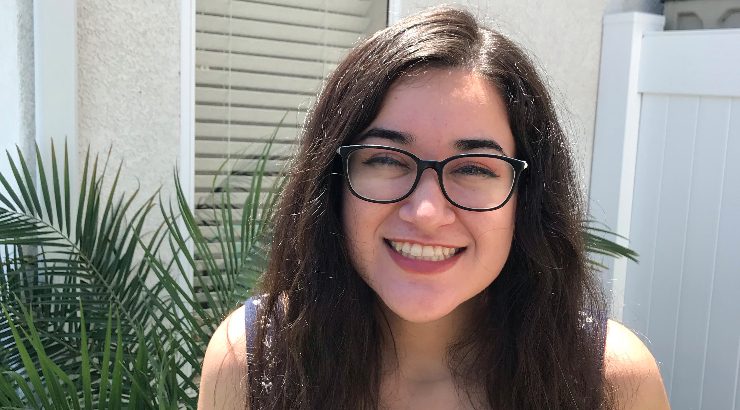 Marisa Quezada ’22 was scrolling through her Instagram feed when a post about racism in her community’s schools caught her eye.

It was a survey asking community members to share their stories about racism on Capistrano Unified School District (CUSD) campuses. Quezada, who grew up in the district, didn’t think twice before submitting her own testimony. She then contacted the survey organizers, a group of women who, along with Quezada, would eventually go on to form CUSD Against Racism, a student-led advocacy group devoted to combating racism and amplifying Black, Indigenous and people of color (BIPOC) in the CUSD.

Now, the third year sociology major at Chapman University’s Wilkinson College of Arts, Humanities and Social Sciences is not only a key member of the advocacy group, but she, with the guidance of Pete Simi, Ph.D., associate professor of sociology, and Edson Cruz, Ph.D.,  instructional assistant professor of sociology, has led the effort to code all 851 submitted testimonies of experienced racism with the hopes of bringing about concrete change.

“We live in a world that demands numbers to back up our claims,” says Quezada. “Research matters, and that’s why this specific research is so important because now I do have those numbers.”

Collaborating to Make an Impact

Quezada’s research is already having an impact. On August 19 CUSD Against Racism presented a report that included Quezada’s research to the district’s trustees, highlighting key findings in Quezada’s study and outlining strategies to promote racial equity at district schools.

The idea of merging activism with research first took shape during a Zoom meeting with Simi where the two met to discuss research topics. As they brainstormed, Quezada recalls a mantra that kept echoing throughout Simi’s words: “research informs activism.” Simi encouraged Quezada to take the survey responses and code them into trends. It was then that Cruz also stepped in.

“Not only was he (Cruz) working with me for a whole month through every step of the process, but he was consistently doing it in a way that made sense,” says Quezada. “I really felt like I was learning through practice,” she says.

Little by little, Quezada coded all 851 testimonies. And while it was a laborious month-long process, Quezada says she’s grateful for the personalized guidance she received from Cruz and Simi.

“Marisa is a deeply engaged student who possesses substantial intellectual curiosity but also a genuine desire to find opportunities to apply research in ways that lead to a more just and equitable society,” says Simi, a nationally-known expert on the topics of hate crime and white supremacy. “I truly admire the work Marisa is doing with the Capistrano School District and see this as a real model for other Chapman students asking themselves how they can make a difference with problems that so often seem intractable.”

“Chapman always makes a claim for personalized education. And they mean it,” Quezada says. “To have these two professors work with me on this research is a great example of that. At the end of the day, I know these professors have my back, and that’s something a lot of students can’t say when they go to college.”

In addition, Quezada plans  to continue building on her diversity and inclusion efforts as she serves in various leadership roles at Chapman, including as co-chair of the Advisory Group on the Status of Women, President of Mortar Board Society, LatinX student assistant and recently as a moderator and panelist for Engaging the World Series: Leading the Conversation on the Significance of Race, hosted by Wilkinson College of Humanities, Arts, and Social Sciences.

“I’ve been lucky enough to have a lot of leadership positions on campus that allow me to put my passion into action,” says Quezada. “In my remaining two years I hope to share what I’ve learned with others and continue learning. I truly believe that if we have the desire to learn and understand different communities, we can move forward and be not only more tolerable people but people with more empathy who also drive change.”