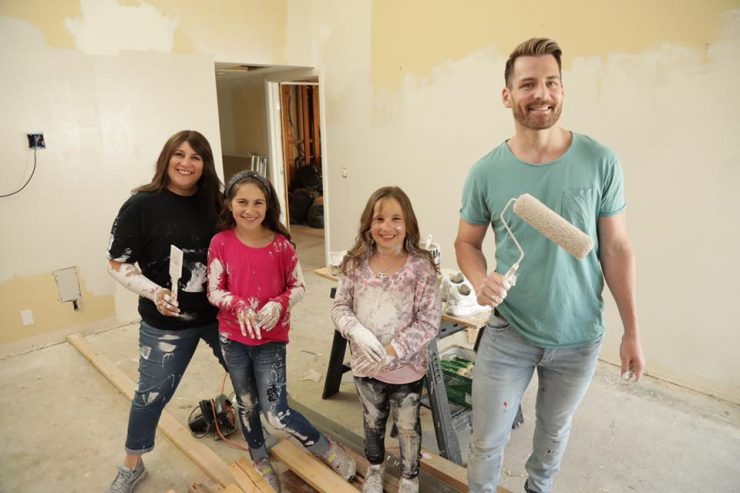 From left, Rabbi Corie Yutkin and her daughters Ariella, 9, and Shayna, 8, paint their home with Orlando Soria, host of HGTV’s “Build Me Up.”
editors-picks

HGTV Home Makeover Paves a Path of Healing for Chapman’s Director of Jewish Life In a “Build Me Up” episode, Rabbi Corie Yutkin’s home filled with bittersweet memories from the loss of her husband is transformed into a revitalizing sanctuary.

Upon entering Chapman University’s Fish Interfaith Center, visitors are instantly enveloped by its peaceful and comforting environment. From the colorful lights that bounce across the high ceilings of the Wallace All Faiths Chapel to the serene sound of the Skaggs Solar Fountain’s running water, it is an atmosphere where one can pause and feel restored. Since joining Chapman in 2017, this place has been the campus home for Rabbi Corie Yutkin, director of Jewish life and chaplain, as she offers support and guidance to the Chapman community.

However, Yutkin’s personal home did not evoke the same uplifting spirit as her campus home.

She moved into her current house in Irvine eight years ago, and shortly, less than six months afterward, her husband, Michael Yutkin, was diagnosed with glioblastoma, the most aggressive and deadliest form of brain cancer. Their daughters, Shayna and Ariella, were five-weeks-old and 17-months-old at the time. After the diagnosis, the Yutkins put their dreams of decorating and renovating their home on hold. Michael Yutkin died two years ago, and their home became a challenging space for the family to occupy as it was a constant painful reminder of his absence.

Orlando Soria, interior designer and host of the new HGTV “Build Me Up” series, heard Yutkin’s story, and wanted to create a beautiful home that had been on the back burner for her and her family for so long. “Build Me Up” is a reality television show featuring home renovations for owners who are navigating difficult life changes. Soria’s goal with Yutkin’s house was to design a space that would honor Michael’s life along with helping Corie Yutkin and her daughters heal in the process.

“What I want to do is create a space for [Corie] to move forward with her girls, enjoy her life and have some fun, too. She deserves it,” Soria said on Yutkin’s episode, which aired on July 22.

A Makeover Both in Home and in Spirit

Filming began in January and spanned several months before the coronavirus pandemic ramped up. Viewers were introduced to Yutkin and her daughters in the fourth episode of the latest “Build Me Up” season.

Yutkin said that a highlight from this experience was when Soria invited her and the girls to paint the walls of their home. Soria encouraged Shayna and Ariella to “add a little more love to the walls” by doodling and writing positive messages that they will paint over. After some time working on the activity and a fun and messy paint fight that followed, their walls turned into an abstract mural that consisted of a “smiley face army,” hearts and random squiggles and shapes.

“It was just so genuine how much joy the girls had,” Yutkin reflected. “I think that was missing a lot. When Michael was sick and at home, laying on the couch, I would have to shush the girls quite a bit because he was resting. So to hear the girls’ loud laughter and giggles, it warmed my heart and I know that Michael would be so pleased with that.”

The episode’s title, “Glass Half Full,” is an homage to Michael Yutkin’s optimistic attitude and “Glass Half Full” T-shirt that he wore to every MRI and doctor’s appointment. Although agreeing to be on national television came with qualms and hesitation, Yutkin adopted her husband’s “glass half full” mentality by appearing on the show with the mission of raising awareness about brain cancer in hopes that it would help other families, who are living through a similar diagnosis.

Soria further incorporated Michael Yutkin’s “glass half full” sensibility through their garden by coloring the walls with a two-tone paint scheme of white and blue. Seeing the courtyard with the “half-full” wall graphic for the first time was one of the moments from the final home reveal that left Yutkin speechless.

“It was a space that wasn’t previously used, and Michael had hoped that it would be a place that the girls and I could just relax in,” she said. “To see the space transformed in a way that I know Michael had talked about is his blessing of telling us, ‘It’s okay to move forward and be happy.’ That’s the legacy that he would’ve wanted for us.

The Value of Community

More than just a home transformation, “Build Me Up” also brought Yutkin through an emotional, personal transformation, as well. She says that her HGTV episode is really about the value of community. Her friends, family and colleagues were the ones who stood beside her during her deepest, darkest periods and cared for her to this point in healing.

“It really does take a village to help you get through some of the tougher times and to celebrate the joys in your life,” she said.

At the Fish Interfaith Center, Yutkin and the dedicated staff create community-building opportunities for people of different faiths, traditions and cultures to be together. For any members of the Chapman Family who are grieving, Yutkin encourages reaching out to the center as a source of community and support. In addition, resources like guided meditations and mindfulness practice, grief counseling and virtual prayer gatherings are available online on the Chapman Hope webpage.

“All of the Fish Interfaith staff is ready, willing and eager to be there to listen to make sure that they know that they’re not alone and that we’re all in this together,” said Rabbi Corie.

“Build Me Up” airs every Wednesday on HGTV at 9 p.m. (Pacific). If you have cable subscription, you can stream Yutkin’s “Glass Half Full” episode online here.

“Looking at this… it’s just healing to my soul.” ❤️

We’ve also had to endure the details of the death of Tyre Nichols being released, demonstrating to us that power unhinged, unchecked, and unbalanced breaks bones, breaks hearts, breaks families, and erodes the all...