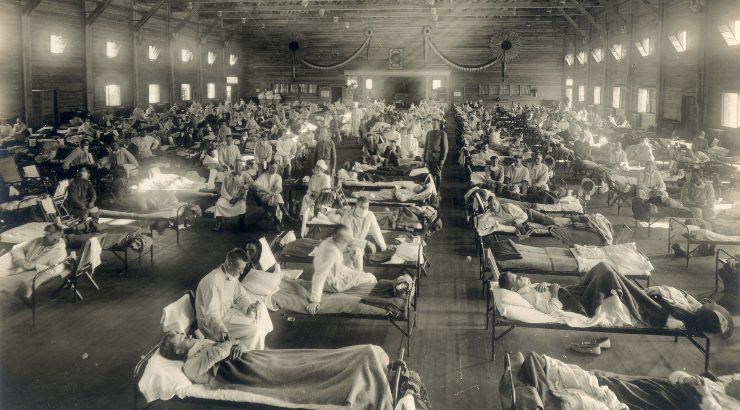 Scholars of the 1918 influenza outbreak see parallels with the current health crisis, but they caution against the presumption that nothing will ever be the same.

Remember the inspiring stories of the great flu pandemic of 1918? Communities rallied around the cause of public health. Self-sacrifice was the order of the day. Across the United States, the citizenry gladly wore masks and observed quarantine measures.

“I hear people now talking about how they had a sense of collective purpose and the common good back then, and I think, ‘What America are they talking about?’” says Keene, Ph.D., an internationally recognized World War I historian. She has studied the 1918 influenza through the lens of its impact on the war abroad as well as the home front.

Many observers are eager to draw parallels between the two pandemics, while others seek inspiration in how they imagine people of the bygone era rallied together. Keene shakes her head and smiles over such chatter.

“They did not do the right things. It’s not a success story,” she says, pointing to the 675,000 American deaths out of an overall population of 105 million.

The two pandemics differ in many ways, scholars say. Unlike the novel coronavirus, the 1918 flu wasn’t entirely new. It was a variation of a virus that circulated in 1889 but mutated and then spread rapidly in the mass housing of WWI troops, says Jeff Goad, Pharm.D., professor and chair of the Department of Pharmacy Practice at Chapman University School of Pharmacy.

“It likely infected 500 million people, or about one-third of the world population. It actually circulated until 1957, when a new flu strain replaced it,” Goad says.

In 1918, there was no federal health authority or agency to provide direction, so the national response was literally and figuratively all over the map, Keene says. Viruses were not understood, but face coverings and quarantine were known to be effective at slowing the spread. Still, many people rejected the measures, sometimes on a monumental scale.

Civic leaders ignored health advisories and proceeded with parades during and after the war – initially to boost Liberty Bonds and later to celebrate the return of their beloved doughboys. The first round of parades helped spread the disease. The second sparked new outbreaks, particularly in Philadelphia, where more than 12,000 people died of the flu within weeks of the celebration.

“They took some measures, but they were haphazard,” Keene says.

Comparing the Novel Coronavirus to the HIV/AIDs Epidemic

For a more striking parallel, look to recent times, says Kirsten Moore-Sheeley, who studied at Chapman with Keene and Professor Alexander Bay, Ph.D., a medical historian. Consider the HIV/AIDs epidemic of the 1980s, says Moore-Sheeley, now a postdoctoral fellow in the history of medicine program at Cedars Sinai Medical Center in Los Angeles. She made the comparison during an invited lecture at UCLA Luskin Center for History and Policy.

“It’s a novel pandemic disease. There’s the stigmatization now with Asian Americans and Asians during this pandemic,” she says. “It’s very similar to the stigmatization of homosexuals during HIV/AIDS. You also have a federal government response that was a bit slow to act, that didn’t readily take action the way you would expect.”

But why did the great flu, a pandemic that killed 50 million people worldwide and propelled the development of public health policy and modern vaccines, largely fall out of popular historical memory? Much of the public’s energy went into honoring and remembering the battlefront victims of WWI, but that’s not the only reason it faded from mind so quickly, Keene says.

“People have the remarkable ability to take terrible, terrible events and try to forget them,” she says. “We forget a lot. Most people forgot the so-called Spanish flu. We’re a society that privileges optimism and page-turning.”

Hence, she is unconvinced when observers of the COVID-19 pandemic suggest that it will forever change society.

“It’s a little too soon to say. I’m very skeptical of claims that nothing will ever be the same,” she says.

As a social historian, though, she is intrigued by several threads she sees woven into the pandemic conversation. For example, she’s watching how some critics of coronavirus restrictions frame death rates from the virus as unfortunate but not so different from a bad flu season, while others see it as an untamed global health crisis. Similarly, she says there’s nothing new about the tendency of the young to shrug off risk.

“There’s a reason that young adults fight our wars. They often feel immortal and impervious to risk,” Keene says.

Intersection of Social Justice and COVID-19

This pandemic might usher in one critical change, though. The historian in her must wait and see where it goes, but she agrees that a new crossroads has been created, as people of color suffer disproportionally from the virus and as the world reacts to the death of George Floyd. Yes, it’s partly because people have been quarantined at home, taking it all in.

“With the pandemic and the intersection of the murder of George Floyd and the Black Lives Matter movement, the visibility of racial injustice in multiple forms is almost impossible to ignore. That has not really been visible to many white Americans,” she says.

The American struggle with systemic racism and health-care inequities is also not new, she adds, but the coronavirus has sparked renewed attention.

“It’s peeled back the ongoing debate we have over these things,” she says. “These are literally life-and-death matters, which the pandemic has revealed.”