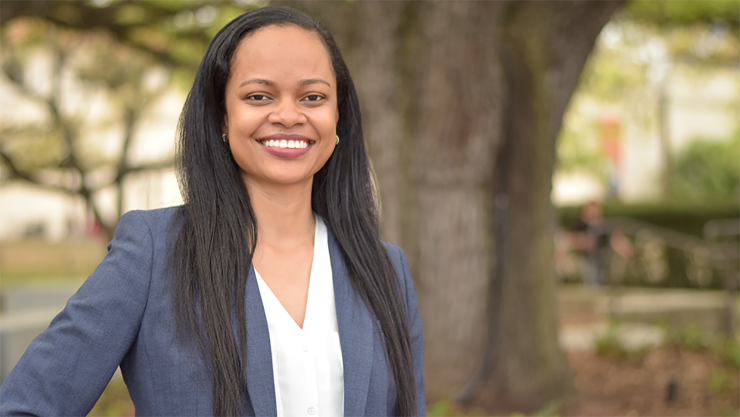 Angelica Allen is an artist-scholar who's excited about collaborating with writers and filmmakers at Chapman.
Wilkinson College

Angelica Allen Brings Global Understanding to New Africana Studies Minor Professor envisions a program that captures "Blackness in all of its complexity and diversity."

Angelica Allen envisions a program that captures “Blackness in all of its complexity and diversity.”

Where Angelica Allen lived, no one else looked like her. As the daughter of a Black U.S. military father and a Filipina mother, Allen spent much of her early childhood feeling the scorn of her classmates and neighbors in her outlying island community.

“There was a lot of bullying, and also a lot of assumptions,” said Allen, who emigrated from the Philippines to the U.S. with her family when she was 9. “It’s that your father is an absentee father, and that you are the product of an encounter with a prostitute. This is the kind of stigma you experience.”

Allen has turned life experience into research, and research into teaching and collaboration. Now she’s bringing her voice and scholarship to Chapman University as assistant professor of Africana Studies and co-director of the new Africana Studies minor along with Associate Dean Stephanie Takaragawa in Wilkinson College of Arts, Humanities, and Social Sciences.

“Having a scholar of Professor Allen’s caliber co-direct the Africana Studies minor in its inaugural year will ensure that the minor thrives and the curriculum reflects best practices in the field,” said Jennifer D. Keene, dean of Wilkinson College. “Her interdisciplinary breadth in Africana Studies, visual anthropology, art, sociology, women’s studies and war and society fits beautifully within Wilkinson College, allowing her to make connections and contributions across multiple programs. We are fortunate that she is joining us.”

Showcasing solidarity with those fighting racism

Allen will arrive at Chapman this fall after serving as a pre-doctoral fellow at the Carter G. Woodson Institute at the University of Virginia and after earning her Ph.D. in African and African Diaspora Studies from the University of Texas at Austin.

She says that Chapman and its new Africana Studies minor “will afford us the chance to talk about the structure of racial injustice in our society today, to showcase the solidarity a university has with millions of Black people across the United States and other parts of the world who are fighting racism and anti-Blackness.”

Allen notes that while her training is in Black Studies, she’s also an interdisciplinary scholar of other fields.

“The number one thing that attracted me to Chapman is its focus on the arts,” she says. “As an artist-scholar, I’m excited about the possibilities this will bring.”

For example, in the fall she will teach a course called “Black Feminisms” that encourages an exploration of video, film, literature and popular culture.

“We’ll learn about and understand intersectionality from the perspective of Black women, and also the interlocking nature of race, gender and class and how Black women have rendered visible those things.” Allen says.

Building collaborative relationships with artists and others

For the future, Allen sees herself and other Africana Studies scholars building collaborative relationships with writers, filmmakers and other artists.

She also plans to build on her ethnographic research work studying Black Amerasians – a community with which she has a special affinity.

“It’s a community that I consider myself a part of, and it’s an overlooked group in many respects,” she says. “This is my attempt to broaden our knowledge of the African Diaspora.”

“It’s part of what it means to bring a global understanding,” she says. “The experiences of Black Amerasians are really relevant to the era of the Black Lives Matter movement because their experiences allow us to understand more than the local dimensions of anti-Blackness. It is a transnational story about the intertwined logic of militarism as it relates to the lives of these lesser-known Americans. Because wherever there’s a U.S. military presence, there are bound to be these populations.”

Beyond documenting marginality and oppression, Allen’s project shines a light on a community’s resilience. That’s important to her as well.

“I use photographs to capture the community’s experiences – their everyday activities and day-to-day life,” she says. “That experience is not just rooted in capturing their marginalization but in capturing the ways in which they thrive – their survival strategies. That’s the resilience we see.”

At Chapman, Allen is eager to help build an Africana Studies program that is “inclusive of all genders, sexuality and ability, so Blackness is not understood as a monolith,” she says. “The kind of program I’m envisioning will capture Blackness in all of its complexity and diversity.”